For more than a decade, a photographer has documented the magical mating rituals of these captivating birds 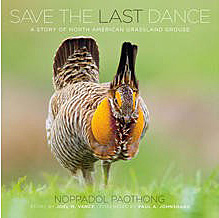 ON MARCH 10, 2001, a blue moon cast light over the Missouri prairie. Temperatures hovered near freezing as I sat in my photo blind, waiting. When my eyes adjusted to the darkness, I realized I was not alone. Ghostlike shadows flew past me, and deep, hollow trills of sound followed: oooo-looo-woooo. A male greater prairie chicken was on his booming ground, about 20 feet from my blind. He ran forward a short distance, stopped suddenly and then stamped his feet in a circle. With his long neck feathers erect and tail spread fanwise, he gave a deep, resonant call. Under the dim moonlight, the sound echoed across the prairie.

If one incident can change the course of a person’s life, that morning surely was one of them. It also was the beginning of a long journey. I grew up in Bangkok, Thailand, far away from the heartland of the United States. I came to this country in 1993 to attend college, never imagining that someday I would become a full-time wildlife photographer or that I would spend more than a decade pursuing imperiled grouse—including some many people have never heard of—that live in the nation’s prairielands.

When the first European settlers arrived here, an estimated 370 million acres of native grasslands flourished in the Great Plains region. Millions of grouse, representing five species and several subspecies, also thrived. Today only about 70 million acres of those original grasslands remain. With their decline, the grouse also have suffered. The heath hen, a species that once ranged along parts of the East Coast, is extinct. Another bird, Attwater’s prairie chicken, now numbers fewer than 50 in the wild, all in Texas. And in Missouri, the greater prairie chicken’s statewide population has declined from about a million to no more than 500.

After that March morning in 2001, I became determined to photograph all grassland grouse during their spring breeding seasons. Every year, I set out to see their mating dances and listen to their booming calls. I traveled to the high, rugged terrain of southern Idaho, the hot and humid coastal plains of Texas, the rolling sandhills in Nebraska and the endless grasslands of Kansas. I walked through blizzards in Wyoming, blowing dust and sand in Oklahoma and frigid temperatures in Colorado. But my most unforgettable experiences were witnessing the birds themselves performing their rituals.

“All grassland grouse dance during their spring mating musicale, an energized stomp that more resembles a jitterbug than it does Swan Lake,” observes author and long-time prairielands denizen Joel M. Vance. “The grouse provide their own orchestral accompaniment with a variety of sounds. These children of the vast sweep of grass can only exist where their eerie mating calls echo in the still of a spring dawn, like the ghosts of those that once roamed there as free as the soft, sighing wind.”

Through my long journey, I’ve come to cherish those calls and appreciate even the slightest breeze on a prairie morning. If a person like me—who grew up in a city on a continent 10,000 miles away—can fall in love with these birds, anyone can. If only they get to know them. 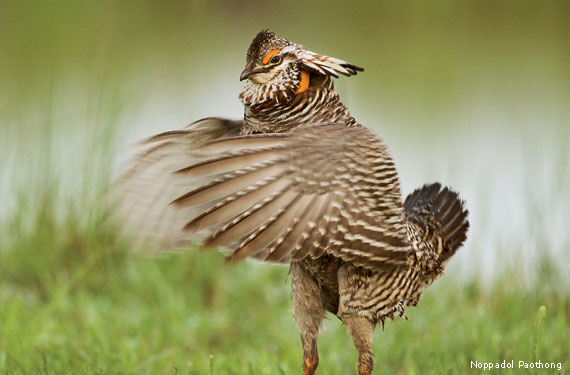 A male Attwater’s prairie chicken performs his spring mating dance. Fewer than 50 of the critically endangered birds survive in the wild today. A captive-breeding program in a Texas national wildlife refuge is underway to help restore the bird’s numbers. “You can imagine how rare it is to get permission to photograph this fragile population,” says the author, who spent dozens of hours waiting in a blind for opportunities to make images of the birds.

Largest of the nation’s grassland grouse, greater sage grouse gather during spring on lekking grounds, where the males show off for prospective mates and battle each other for the right to breed. The male’s courtship display begins with a rapid wing-swish, followed by inflating chest air sacs. As they fill up and then deflate, the air sacs make loud popping sounds that echo across the prairie.

The males, which weigh more than 5 pounds, fight fiercely over breeding territories. Suffering from habitat loss, the species now inhabits only about half of its historic range in western North America. 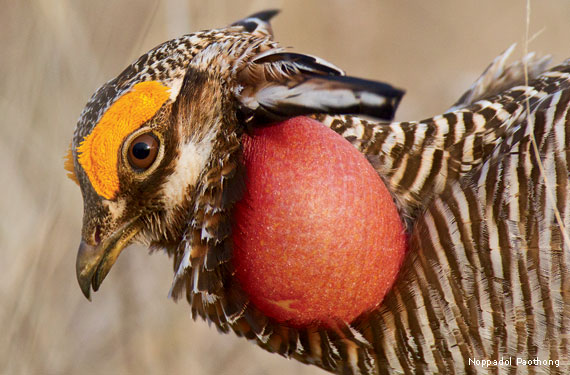 Marked by distinctive yellow eye combs, a male lesser prairie chicken inflates his air sac during mating season on a Kansas prairie. Smaller in size but somewhat similar in appearance to the greater prairie chicken, the lesser’s overall population has declined dramatically in recent decades as much of it former short-grass domain in five southern Great Plains states has been developed or converted to agriculture. 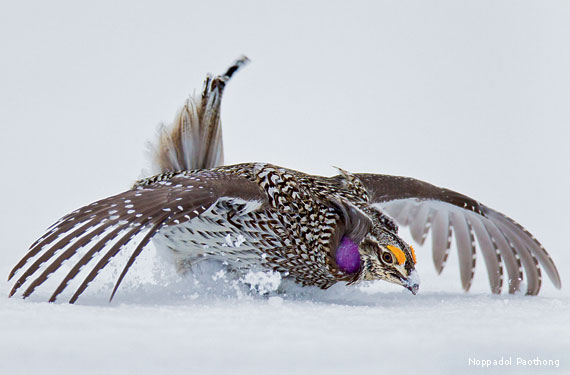 Rattling his tail and stomping his feet, a male Columbian sharp-tailed grouse struts his stuff in a Wyoming field. The Columbian is the smallest of six subspecies of sharp-tails. To photograph it, the author hiked through several feet of snow during a blizzard. “The powder flew around the birds as they danced,” he says. “It was one of my most memorable moments.”


Watch and listen to these greater sage grouse as they perform their mating dances. Video: Gail Patricelli's lab at the University of California, Davis.

Three out of four U.S. grassland bird species have declined during the past three decades—the steepest population declines of any group of North American birds. To help prevent further losses of their prairie habitats, NWF is actively working to ensure that the conservation provisions of the U.S. Farm Bill remain strong.

“The law is the largest source of funding for wildlife conservation on U.S. private lands,” says Julie Sibbing, NWF director of agriculture and forestry programs. “We’re working to expand funding for its grassland-protection programs and reduce incentives for plowing prairielands by limiting subsidies farmers get if they bring these lands into production.”

By producing technical reports and convening workshops to discuss these challenges, NWF also is working to ensure that federal mandates promoting bioenergy do not result in more grassland destruction. To learn more, visit www.nwf.org/farmbill.