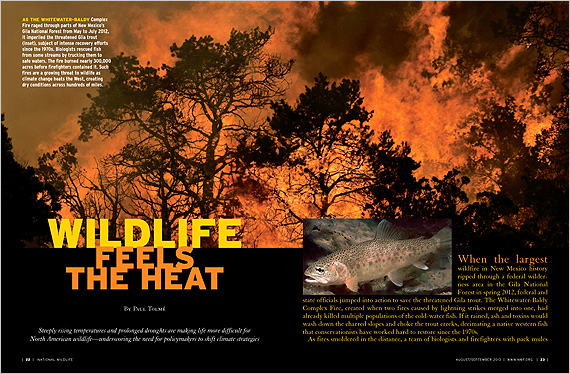 WHEN THE LARGEST WILDFIRE IN NEW MEXICO HISTORY ripped through a federal wilderness area in the Gila National Forest in spring 2012, federal and state officials jumped into action to save the threatened Gila trout. The Whitewater-Baldy Complex Fire, created when two fires caused by lightning strikes merged into one, had already killed multiple populations of the cold-water fish. If it rained, ash and toxins would wash down the charred slopes and choke the trout creeks, decimating a native western fish that conservationists have worked hard to restore since the 1970s.

As fires smoldered in the distance, a team of biologists and firefighters with pack mules carrying equipment trekked through the burnt landscape to Whiskey Creek, a remote stream with a distinct genetic line of Gila trout. “If we lost those populations, all that genetic material would be gone forever,” says Jill Wick, Gila trout biologist for the New Mexico Department of Game and Fish. “It was a race.”

Working fast, team members jolted the water with a mild electric shock, stunning the trout long enough to capture them. A helicopter airlifted the fish to a tank truck, which delivered the trout to a federal hatchery. Evacuating the trout, Wick says, was “a huge effort.”

By the time firefighters contained the Whitewater-Baldy Complex Fire in late July, it had burned almost 300,000 acres. Call it a glimpse of the future in a warming world. Huge efforts and difficult rescue operations will become ever more necessary if humans are to avoid species extinctions in the coming decades as climate change burgeons. Recent studies by climate experts predict that weather extremes such as heat waves and droughts that now strike periodically will become the norm in the years ahead—causing more colossal fires, altering the landscape and pushing vulnerable species closer to the brink.

“Some species can handle a level of drought and heat,” says Amanda Staudt, a senior scientist in NWF’s Climate and Energy program. “The problem is we are pushing them beyond their ability to cope.” 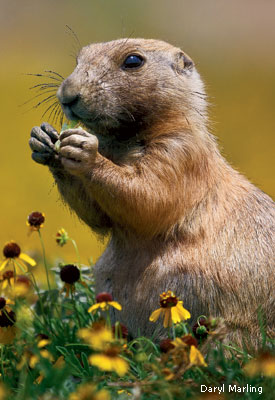 Last year was the hottest in the continental United States since the federal government began keeping records in 1895. July 2012 was the hottest month ever in the nation, and a multiyear drought affected two-thirds of the nation. While humans cranked up the air conditioning, in many areas wildlife suffered. Across parts of the Midwest and Southwest, rivers and streams dried up or warmed to intolerable temperatures, prompting massive fish kills. Megafires raged and grasslands withered in New Mexico, Colorado, Kansas and other western states, eliminating food and cover for prairie species. “The bulk of the evidence tells us that climate change is happening here and now,” Staudt says. “We need to take action.”

The consequences of failing to act are detailed in a recent NWF report, Wildlife in a Warming World: Confronting the Climate Crisis, which highlights the difficulties ahead and lays out the challenges facing conservationists. Written by Staudt and other NWF staff, the report consolidates data from 175 peer-reviewed studies to examine the landscape-level changes and wildlife impacts already under way, and those to come, in various regions of the United States—from the southwestern sagebrush steppe and the Great Lakes to Appalachia and the coasts.

The Southwest, for example, is becoming more arid, decreasing vegetation important to wildlife survival. A study by scientists from the Los Alamos National Laboratory, U.S. Geological Survey, University of Arizona and other partners, published recently in the journal Nature Climate Change, concludes that increased summer heat will cause the Southwest to exceed megadrought conditions during 40 of the last 50 years of this century. “The ultimate conclusion of our study is that in a warmer world, we won’t be able to have forests in many places where they exist today,” says A. Park Williams of the Los Alamos lab, lead author of the paper. “Continued warming will cause forest distributions to change substantially in the southwestern United States.”

Reduced precipitation is already a culprit in local extinctions of desert bighorn sheep populations in California. It is also hampering efforts to restore the endangered black-footed ferret, a prairie carnivore that feeds almost exclusively on prairie dogs. 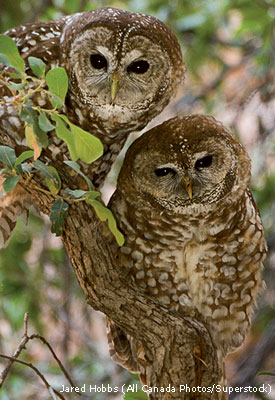 Animals that rely on the pinyon-pine forestlands of the Southwest are likewise having a harder time finding food. More than 2.5 million acres of pinyon pine in the Southwest have died in recent years because of drought, and a study last February from the University of Colorado–Boulder showed that pinyon pines in New Mexico and Oklahoma are producing 40 percent fewer seed cones than 40 years ago. The seed-filled cones of pinyon woodlands are an important food source for species ranging from black bears to Clark’s nutcrackers (below).

Fire is also becoming more common in landscapes that previously burned infrequently, such as the Great Basin’s sagebrush steppe. Invasive cheat grass, native to Europe, southwestern Asia and northern Africa, has made this habitat more fire prone by supplying more tinder. Scientists worry that sagebrush, which did not evolve with repeated wildfires, may be replaced by the fast-growing cheat grass. “In this case, global warming is advancing a wholesale habitat transition,” Staudt says.

Heat waves like those in summer 2012 already are causing major fish kills. Warm water contributes to algal blooms that deplete oxygen and spur the growth of parasites. Last summer, large fish kills struck Texas, Michigan, Minnesota, Pennsylvania, Wisconsin, Ohio, Indiana and Illinois, among other states. On Iowa’s Des Moines River, the water reached a bathtub temperature of 97 degrees, causing the death of 37,000 shovelnose sturgeon, the only commercially fished U.S. sturgeon species and the source of hackleback caviar. At the same time, gradually warming waters are particularly troublesome for cold-water fish, which can’t survive in streams above their species’ temperature range. In the Appalachians, federal scientists predict that more than half of wild trout populations are vulnerable to climate change.

In addition to their many fish species, the Appalachians are a global epicenter of salamander diversity, with more than 100 species, including such colorfully named specimens as the Cow Knob and Peaks of Otter salamanders. “We have species that exist nowhere else but on one mountaintop,” says Kyle Barrett, a Clemson University assistant professor of aquatic ecology.

Barrett is working on a study of the climate-change vulnerability of 21 salamander and frog species in the Southeast and throughout the Appalachians. Increasing temperatures are already changing the timing of salamander breeding, and as air and water temperatures spike, suitable habitat will shrink. Mountain salamanders will be forced to climb uphill, toward higher Appalachian peaks, in search of cooler temperatures. “If they overheat, they die, so they can’t disperse to nearby habitats,” Barrett says. Salamanders in the Southeast’s coastal plains, such as the rare flatwoods salamander, likewise face difficulty. They have no mountains to climb in search of more hospitable temperatures. 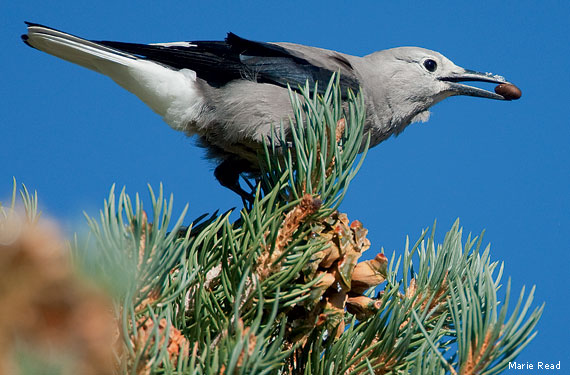 To avoid species losses, conservationists now recognize that wildlife managers must adapt their strategies. “We are at a stage where we need to get creative,” says Bruce Stein, director of NWF’s Climate Change Adaptation program. “We can’t necessarily rely on the same bag of tricks as in the past.” Humans are undertaking adaptation programs to protect their communities from rising seas and other climate impacts, and wildlife professionals similarly must prepare for and respond to the impacts of climate change. At times this will involve efforts to resist these changes and buy time for important resources, while in other instances, managers will need to accept that change is coming and work to enhance the resilience of our species and habitats to cope with that change.

Adaptation measures include identifying and protecting cold-water refuges in rivers by restoring riparian tree cover and planting native species that can better handle the heat. In some places, rivers themselves are being engineered to help fish cope. On Ohio’s Black River, NWF has helped design fish shelves that will provide suitable habitat even in the face of increasingly wide swings in water levels. Similarly, on Hawaii’s Big Island, conservationists are restoring upper-elevation forests to provide endangered birds a safe haven from the warming-induced upward climb of malaria-infected mosquitoes. And along the shores of the mid-Atlantic, NWF is working with Delaware officials to create new coastal impoundments that are inland and upland from existing impoundments, protecting freshwater sites for shorebird habitats threatened by sea-level rise.

In addition to reducing greenhouse gas emissions, which are the underlying cause of global warming, the NWF report recommends some key steps to give wildlife a fighting chance in a warmer world:

• promote “climate-smart conservation,” a practice developed by NWF and its partners that encourages resource managers to adopt forward-looking conservation goals and to design conservation strategies and actions that address key climate impacts and vulnerabilities;

• encourage the use of nature-based approaches to protecting human communities from climate change impacts, taking advantage of the protective benefits of living shorelines, wetlands and natural dune systems; and

• implement the new National Fish, Wildlife and Plants Climate Adaptation Strategy, a collaborative effort among federal, state and tribal partners that provides a unified, science-based approach for reducing the negative impacts of climate change on wildlife and habitat.

“We need to look at what the climate conditions will be and manage coming changes so that we end up with habitats that still have ecological value,” Stein says.

Back in New Mexico’s Gila Wilderness, trout biologist Wick says she and her colleagues are grappling with the new reality of massive wildfires. “The big lesson is that when you have small numbers of fish confined to small ranges, these catastrophic fires can come through and wipe out half the population,” Wick says.

This summer, Wick and colleagues will survey Whiskey Creek and other streams to assess how the Gila trout that remained behind are faring. “We think we lost seven populations,” Wick says. When conditions are safe, some 340 trout helicoptered to safety will be returned to the wild.

But there may be one silver lining to the 300,000-acre fire: It likely eliminated some populations of introduced rainbow trout. Gila trout and rainbows cross-breed if mixed, so biologists avoid placing Gilas in streams containing rainbows. If the fire extirpated rainbows from some streams, biologists can reintroduce Gilas. It’s a small bit of good news both for a species and for its protectors as they confront the new realities of a warming planet.

Finding ways to reduce the threat of global warming is a top NWF priority. For information about how you can help, visit www.nwf.org/globalwarming. The consequences of failing to act are detailed in the new NWF report Wildlife in a Warming World: Confronting the Climate Crisis, which highlights the challenges conservationists face.