Declining over parts of their range, these insect-eating, winged tenants need nest boxes now more than ever 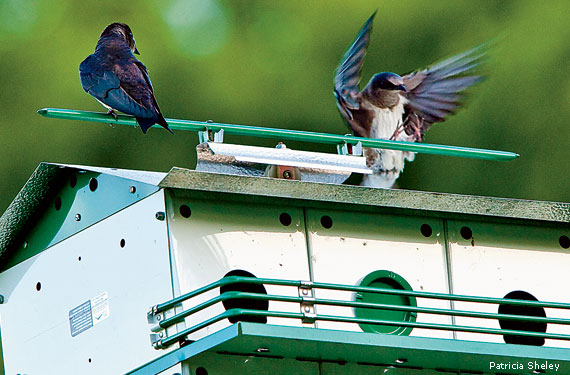 ON A SULTRY SUMMER EVENING, more than two dozen boats are anchored off a small island in Lake Murray, not far from Columbia, South Carolina. Their passengers are waiting to see one of nature's most amazing avian spectacles: a gathering of huge numbers of purple martins at a post-breeding roost. At first, only a handful of the dark, long-winged birds twitter high above the boats. Then, as the sun begins to set, their numbers build dramatically until tens of thousands of martins are circling over the island.

“The birds move together in formation,” says Sara Green, director of education for the South Carolina Wildlife Federation, an NWF affiliate. “It almost looks like a dance.” Precisely at dusk, she explains, the cloud of martins will fly down all at once and land on the island’s trees and bushes. “When they leave in the morning, the flocks are so big they can be seen on radar,” says Green, who has witnessed the event several times.

Lake Murray’s purple martin roost is the largest in the country. Though numbers vary from year to year, a survey conducted in the mid-1990s estimated that more than 700,000 of the birds were descending on the 12-acre island each evening during late July and early August. Similar but smaller roosts are scattered across the country, including sizable ones in Richmond, Virginia; Nashville, Tennessee; and Omaha, Nebraska. After martins migrate to their winter range in Brazil, they again gather in large roosts, often settling down for the night in towns and cities.

North America’s largest swallows, purple martins have a long association with people. Native Americans hung hollowed-out gourds for the birds to use for nesting, and European colonists quickly adopted the practice. Eventually, someone developed nest boxes with multiple compartments for these social birds, and the idea spread. “Almost every country tavern has a martin house,” wrote artist and ornithologist John James Audubon back in 1831. Today more than a million people in the United States and Canada are purple martin “landlords” who put up nest boxes or gourds for the birds on their property.

“East of the Rockies, martins now depend almost entirely on people for nest sites,” says John Tautin, executive director of the Purple Martin Conservation Association in Erie, Pennsylvania. He adds that this is a good time for even more property owners to become landlords. “Overall, the population of martins is stable,” Tautin says, “but it is starting to tip toward decline.” In particular, there’s been a downturn along the northern edge of the species’ breeding range. “Minnesota has lost 75 to 80 percent of its martin population in the last 40 years,” he says. Numbers also have dropped in Canada and New England.

Scientists don’t know for sure why these populations are declining. Tautin points out that fewer people install nest boxes these days than in years past. Another possible threat is pesticide use in South America, though most researchers believe weather plays a more significant role.

“My guess is martins have always been extremely susceptible to unusual weather events,” says Charles Brown, a swallow expert and professor at the University of Tulsa who adds that with climate change, such events are increasing. This year, for example, “the Great Plains endured one of the coldest springs on record, and we may be experiencing martin declines as a result.” One reason: Martins are among the earliest migrants to return from the Tropics, with the first birds reaching Florida by January. Tree swallows also return early, says Brown, but they can feed on berries. “Martins eat only insects,” he explains, and the appearance of insect prey can be delayed by cold weather. 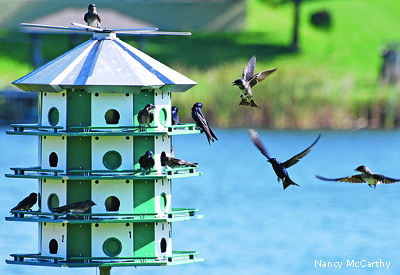 If you live in an area where purple martins breed and decide to put up a nest box, you have a good chance of attracting the birds. The species seems to like being close to humans, says Larry Melcher, a purple martin landlord in Shepherdsville, Kentucky. “They don’t even mind urban environments,” adds Melcher, who oversees 40 gourds on the grounds of the Ford Motor Company plant where he is employed. “Trucks come in and out all day,” he says, “but it doesn’t seem to bother the birds.”

Like many people, Melcher first got interested in the birds as a child when his father put up a martin box in their backyard. Today, in addition to caring for the birds where he works, Melcher hosts martins at his home and, in his spare time, gives talks to aspiring landlords. He suggests starting small, either with a basic house or six to eight gourds. “If you attract martins the first year, you can always expand later,” Melcher says.

“The location of the nest box is very important,” says Kathy Freeze, a martin landlord in Licking, Missouri, who has 72 pairs of the birds breeding on her property. “The house should be placed at least 50 feet from trees,” she says. Melcher agrees, pointing out that wide-open flyways are best for enticing martins. Also, he says, don’t place the house or gourds too low. “They should be at least 12 to 15 feet high.” And remove vines and shrubs from the area directly underneath the nest box.

“Another important thing to do is keep house sparrows and starlings from nesting in martin houses,” says Melcher. “Sparrows will destroy martin eggs, and starlings will kill the young.” Freeze says it’s also critical to protect martins from predators such as snakes and raccoons. “Snakes can climb high,” she says, and some type of predator guard on the pole is the best solution. “Keep your birds safe,” she says.

Both Melcher and Freeze recommend placing martin houses near your home. Not only do the birds seem to prefer it, “you can enjoy them,” Freeze says. “They’re such fun to watch. It’s infectious.”

NWF’s Certified Wildlife Habitat® program provides gardeners with information about native plants and other elements needed to create inviting outdoor spaces for birds and other wildlife. To learn how to certify your yard, visit www.nwf.org/nwfgarden.

Birdhouses can be crafted in a workshop, or they can be purchased at a local bird supply store or National Wildlife Federation's catalog.

Find out more about becoming a purple martin landlord at purplemartin.org.