A camera-toting biologist captures images of “one of the most mysterious, striking and unusual canids in the world” 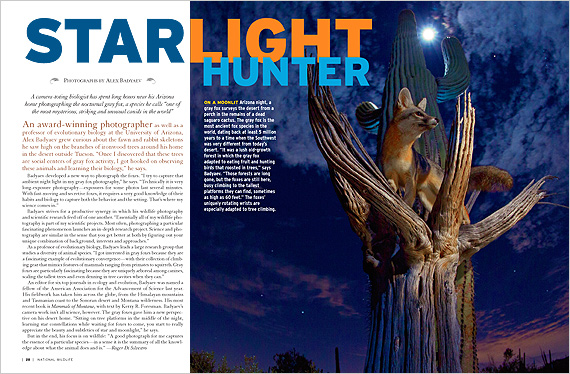 AN AWARD-WINNING PHOTOGRAPHER as well as a professor of evolutionary biology at the University of Arizona, Alex Badyaev grew curious about the fawn and rabbit skeletons he saw high on the branches of ironwood trees around his home in the desert outside Tucson. “Once I discovered that these trees are social centers of gray fox activity, I got hooked on observing these animals and learning their biology,” he says.

Badyaev developed a new way to photograph the foxes. “I try to capture that ambient night light in my gray fox photography,” he says. “Technically it is very long-exposure photography—exposures for some photos last several minutes. With fast-moving and secretive foxes, it requires a very good knowledge of their habits and biology to capture both the behavior and the setting. That’s where my science comes in.”

Badyaev strives for a productive synergy in which his wildlife photography and scientific research feed off of one another. “Essentially all of my wildlife photography is part of my scientific projects. Most often, photographing a particular fascinating phenomenon launches an in-depth research project. Science and photography are similar in the sense that you get better at both by figuring out your unique combination of background, interests and approaches.”

As a professor of evolutionary biology, Badyaev leads a large research group that studies a diversity of animal species. “I got interested in gray foxes because they are a fascinating example of evolutionary convergence—with their collection of climbing gear that mimics features of mammals ranging from primates to squirrels. Gray foxes are particularly fascinating because they are uniquely arboreal among canines, scaling the tallest trees and even denning in tree cavities when they can.”

An editor for six top journals in ecology and evolution, Badyaev was named a fellow of the American Association for the Advancement of Science last year. His fieldwork has taken him across the globe, from the Himalayan mountains and Tasmanian coast to the Sonoran desert and Montana wilderness. His most recent book is Mammals of Montana, with text by Kerry R. Foresman. Badyaev’s camera work isn’t all science, however. The gray foxes gave him a new perspective on his desert home. “Sitting on tree platforms in the middle of the night, learning star constellations while waiting for foxes to come, you start to really appreciate the beauty and subtleties of star and moonlight,” he says.

But in the end, his focus is on wildlife: “A good photograph for me captures the essence of a particular species—in a sense it is the summary of all the knowledge about what the animal does and is.” 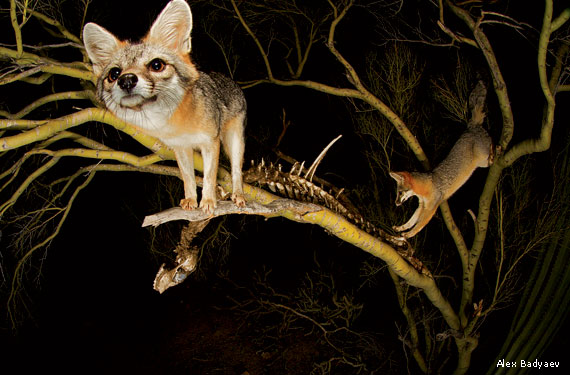 Gray foxes share a branch with the skeleton of a fawn killed by a coyote. “We don’t know why breeding pairs of foxes drag bones high up to the canopy,” Badyaev says, “but a typical territory of a breeding pair has two or three such skeleton trees. These dried-out bones seem to be used mostly for resting and for marking territory.” Gray foxes, which range from southern Canada to montane habitats in northern South America, are mostly nocturnal. Mated pairs often sleep by day high in trees. 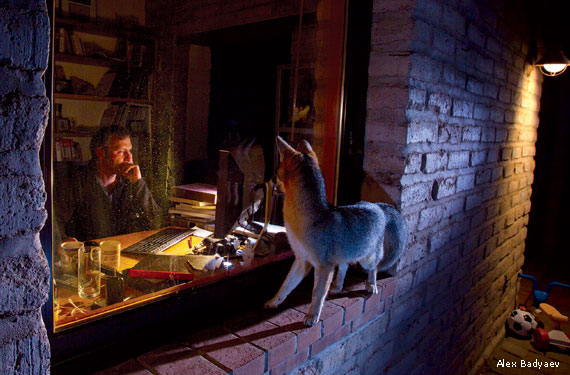 Elevated platforms are a rarity in the desert, making a flat windowsill of Badyaev’s adobe cabin outside Tucson a tempting place for a male fox to mark his territory while searching for females. “Lit by a small porch light and the moon, the window glass gave the male a reflection that looked like a challenging rival,” Badyaev says. “For several nights I was mesmerized to see on the other side of the window this elusive, beautiful animal defiantly staring down his own image. After he realized that my cabin was not the place to find females, he moved on.” Badyaev used a camera mounted outside and controlled by a switch on his desk to take this photo of himself and the fox. 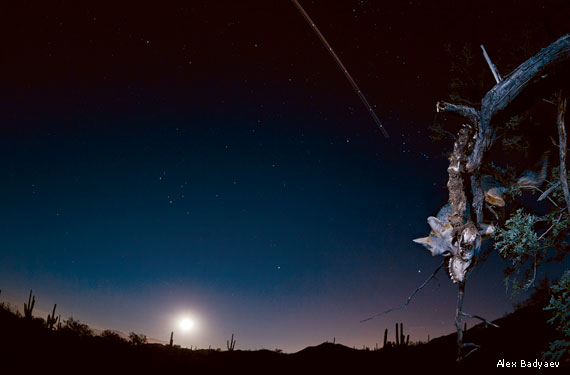 A gray fox munches on a skeleton from the safe perch of a tree. The lights of a jet flying to Tucson International Airport 50 miles away form a line in the night sky, a sign that this photo was made with a long exposure. “Photographing under moonlight and starlight is challenging but uniquely rewarding,” Badyaev says. “Not only do you see commonly missed behaviors, but it also greatly awakens your senses. You pause to let a mouse cross your path because you hear it coming for minutes, you smell approaching deer, and you greatly appreciate the ability to tell time on photographs by the position of constellations.”