Crows Can Distinguish Faces In a Crowd

For years, these birds can recognize the people who have frightened them at roost sites 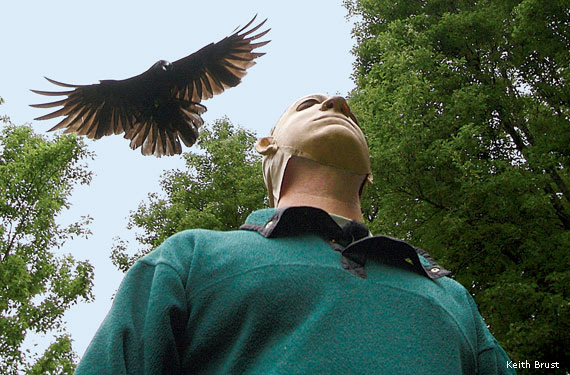 HAVE YOU EVER THOUGHT that the crow sitting on your garbage can was giving you the eye? Not just watching you, but thinking about you? Turns out, you were right. New findings by wildlife biologist John Marzluff and his students at the University of Washington in Seattle suggest crows are highly adept at recognizing human faces. What’s more, the research has uncovered evidence that the birds use their keen perceptive abilities to distinguish between what they consider to be good and bad humans, forming opinions that can last for years.

The results verify suspicions Marzluff has had since he began studying crows in the early 1990s. “As soon as we started paying close attention to them—either catching them or going to their nests—you could tell they were acting differently when we were around,” he says. “If you got within several hundred meters, the birds were alert, they stopped whatever they were doing, and they were watching you as opposed to what you wanted to do, which was watch them.”

In 2006, crow behavior that had been an inconvenience was put to the test with an experiment in which researchers netted and banded sets of crows at various sites on campus and around Seattle while wearing rubber human masks.

A few days later the researchers walked through the same areas wearing assorted masks and recording how the birds responded. At each site the crows ignored all but the particular mask that had been worn during the banding, which they greeted with loud scolding cries and the formation of small mobs. The effects were the same regardless of what clothing the researchers wore or who wore which mask. “The interesting part was that not a whole lot mattered except the face,” Marzluff says.

The ability to recognize human faces may not be as rare among nonhuman animals as one might think. After banding western gull chicks on California’s Southeast Farallon Island in spring 1980, biologist Larry Spear, then of the Point Reyes Bird Observatory, found himself mobbed whenever he reentered his study site, a problem he eventually rectified by donning a Halloween mask. In lab research, biologists have found human facial recognition among species ranging from dogs and pigeons to sheep, octopuses and even honeybees. More recent studies have found similar skills among free-roaming magpies in South Korea and mockingbirds in Florida.

But the most interesting aspect of the Seattle study may be the degree to which campus crows have clung to their memory. Today, close to seven years after the study began, the birds continue to harangue the banding mask even though they see it only twice a year for a few hours at a time. Even more remarkable, the percentage of birds joining the ruckus has roughly doubled since the experiment began, even though most have never been banded and likely didn’t witness the original traumatic event. Some are young birds born in years since.

Given the variability of human behavior, Marzluff suspects that the crow’s skill at telling us apart helps explain why the bird thrives in cities. At least some of his scolding crows also recognize people who regularly offer food. “It would be a rare hawk that would be nice to a crow,” he says. “But with humans you have to classify us as individuals. Clearly, they’re able to do that.”

Garry Hamilton wrote about gopher tortoises in the August/September issue of National Wildlife.