Conservationists are racing to build up new populations of this island's national bird, once believed extinct for nearly 400 years 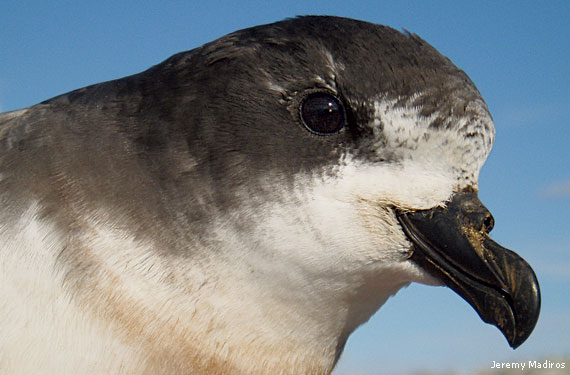 EXTINCTION IS FOREVER, RIGHT? As in gone, dead, kaput. Thank goodness no one told the once-vanished Bermuda petrel.

Not that the seabird’s disappearing act was unconvincing. First encountered by Spanish sailors in the 1500s, the mariners thought the bird’s eerie, nighttime courtship calls were the shrieks of devils. The petrels then may have numbered as many as half a million birds, all native to the Bermuda Islands, now a British territory in the Atlantic Ocean about 650 miles east of North Carolina.

After that maiden contact with European seafarers, it was downhill for the bird. Pigs, unloaded on Bermuda as food for shipwrecked Spanish sailors, quickly destroyed most of the petrel population, rooting up their underground nests and eating eggs, chicks and even adults. When English colonists arrived in 1609, they brought the petrel a new name—cahow—suggestive of the bird’s nocturnal cry. They also brought dogs, cats and rats that feasted on the remaining petrels. By the 1620s, the cahow had gone extinct. Or so it seemed.

Then a lone petrel turned up on the island in 1906, and others in 1935 and 1941. Scientists soon launched a search for the species’ Bermuda nesting habitat. In 1951, they found 17 nesting pairs, producing a total of only seven or eight chicks yearly, hunkered down on four rocky islets in Castle Harbor. 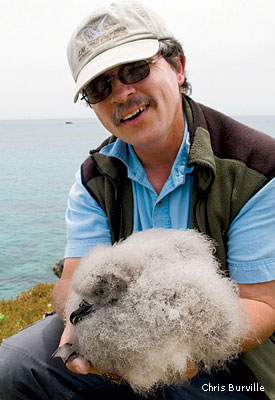 More than 300 years after it dropped off the radar, the Bermuda petrel turned out to be only almost extinct. That was the good news. The bad news was that the bird’s entire nesting habitat consisted of those four “god-awful little rocks,” says Jeremy Madeiros, senior terrestrial conservation officer with Bermuda’s Department of Conservation Services (right, with petrel chick), who since 2001 has directed efforts to save the territory’s official bird. Madeiros inherited his job from David Wingate, the grand old man of Bermuda petrel recovery, who, as a bird-crazy teenager, took part in the 1951 search.

Petrel pairs, mated for life, rear a single chick per nesting season, normally in deep burrows the adults dig using beaks and feet. But on the limestone islets where they were rediscovered there was little soil; the birds were nesting in rock crevices. Wingate, then Madeiros, constructed artificial burrows, using concrete to stabilize each nest site against the huge waves that break over the rocks during hurricanes. With the man-made burrows, the petrels slowly began increasing.

Beginning in 2004, Madeiros started taking petrel chicks born on the rocks and relocating them to nearby Nonsuch Island, a protected, 17-acre nature reserve and historical cahow breeding site that offers higher-elevation, forest cover and a deep soil layer. Madeiros parked each chick in one of the two dozen artificial burrows he had dug on Nonsuch and, like a proper petrel parent, reared them on squid and anchovies. In due time, the fledglings flew off to sea. Bermuda petrels visit land only to nest, spending most of their lives ranging across the North Atlantic from the coastal United States and Canada to waters off western Europe. The birds begin breeding at three to five years old, usually returning to nest on the individual islands on which they fledged.

It was one thing to rear young petrels on Nonsuch. But how could Madeiros get them to return to the island as adults? “We had to cheat,” he says, referring to a solar-powered, weatherproof sound system he installed adjacent to the Nonsuch petrel burrows. In autumn, when adult petrels return to Bermuda after their wanderings at sea, they are guided by a recorded broadcast of the same weird courtship cries that terrified Spanish sailors. “We made Nonsuch into the hottest cahow nightclub in the island,” Madeiros says. “The calls from the speakers encouraged the birds that had returned to land to start prospecting for nests, and sure enough they started occupying the artificial burrows that were closest to the speakers.”

Madeiros’s labors have begun paying off. In 2009, a petrel pair produced the first chick hatched on Nonsuch since 1620, an event Madeiros calls “probably the best part of my whole career.”

Another milestone was reached in 2012, when the petrel population climbed to 101 nesting pairs, including 13 on Nonsuch. A record total of 58 chicks fledged successfully to sea, seven of them from the new Nonsuch colony. “We’ve been able to dance a bit of a jig with that, for sure,” Madeiros says.

Despite such success, the cahow remains in grave danger from hurricanes and the effects of climate change because most of its population remains on the forlorn rocks. “On Bermuda, sea level is rising at three times the rate it once occurred,” says NWF President Larry Schweiger, who toured the birds’ nesting sites with Maderios not long ago. “That’s why the work to establish a cahow nesting population on higher ground is so crucial to the species’ future. It’s a striking example of what conservationists and wildlife now have to go through when backed into a corner from climate change.”

Michael Lipske, based in Washington, D.C., is a former National Wildlife senior editor.