Moles turn out to be stereo sniffers 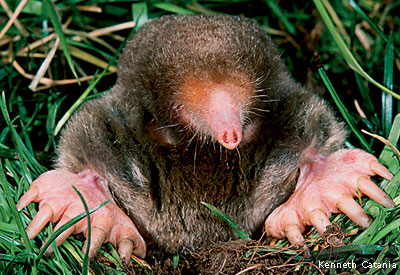 Thanks to directional, or stereo, hearing, most mammals can tell by sound which direction a noise is coming from. Now it appears that some species also use stereo scent to determine an object’s location.

A new study shows that the common mole—often found in burrows under lawns and gardens—relies on stereo sniffing to locate prey such as worms. “I came at this as a skeptic,” says Kenneth Catania, the biologist at Vanderbilt University who conducted the research, published recently in Nature Communications. “I thought the moles’ nostrils were too close together to effectively detect odor gradients.”

The common mole is virtually blind and doesn’t have a very good sense of touch, says Catania, “so I was quite surprised when they turned out to be very good at locating prey.” Experimental evidence established that they can tell which direction a scent is coming from, the first evidence of a directional sense of smell in a wild mammal. “The fact that moles use stereo odor cues to locate food suggests other mammals that rely heavily on their sense of smell, like dogs and pigs, might also have this ability,” Catania says.