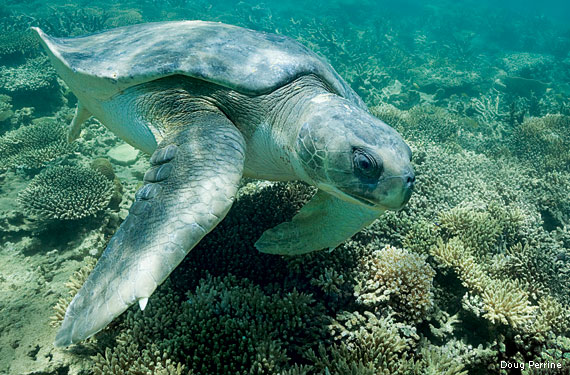 IN THE 1990s, WHEN I WAS GATHERING PHOTOS for a book on sea turtles, I succeeded in capturing underwater images of all seven species except the Australian flatback, a native of the South Seas that grows up to 200 pounds and had never been photographed underwater. As with all sea turtles, female Australian flatbacks must leave the sea to deposit eggs on sandy beaches, a process of a few hours. The rest of their lives remains largely unknown. The males, which presumably never leave the sea after hatching, are a major mystery. One of the world’s leading sea turtle authorities, after studying the species for 14 years, has never even seen a male.

Despite the obvious challenge, I needed underwater photographs of the flatback sea turtle to round out my book. With what I recognize now as daring—or perhaps foolish—optimism, I considered that, after a bit of research, I could be the first person to take a photograph of an adult flatback sea turtle in its marine habitat.

On a Wild Sea Turtle Chase

“Can’t be done,” said Australian sea turtle guru Colin Limpus, chief scientist for threatened aquatic species at the Queensland Department of Environment and Heritage Protection. He should know. He’s studied sea turtles at various sites around the world since 1976. “Flatbacks live in turbid water,” he explained. “End of story.” All other sea turtles, immediately after hatching, swim out to open ocean, but flatback hatchlings stick to shallow coastal waters, preferring murky, soft-bottom habitats restricted to the northern Australian continental shelf. 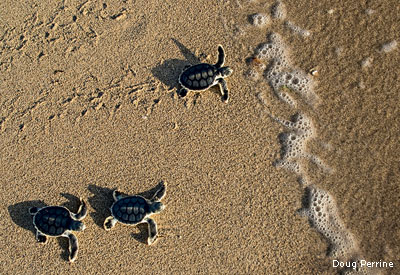 Discouraged but undeterred, in 2000 I headed to an island off Queensland known for its flatback turtle nesting beaches. Massive rainstorms preceded my arrival, turning a nearby river into a torrent of mud and clouding the sea. However, a local diver told me he had seen flatbacks hiding under ledges during the dry season when there was a bit of visibility around the island. Encouraged, I went back for a second trip but found only more bad weather. Worse, when I did find the turtles under the ledges, I saw they were small green sea turtles—not flatbacks.

I turned next to the academic literature on sea turtles. An extensive review concerning flatbacks revealed only one paper that offered a glimmer of hope. It mentioned remote islands between Australia and New Guinea where water clarity might be sufficient for underwater observations. Flatbacks had been recorded nesting on these islands in years past, but there were no recent records.

I was eager to get rolling, but one obstacle or another stood in my way. The islands lay hundreds of miles from the nearest port where I could hire a charter vessel, and very few captains were familiar with these waters. Five years passed before I could arrange for a private yacht to take me to these islands, on one of which I found only dark, murky water, crocodile tracks and a turtle carcass with a shark bite. To top it off, the island that looked most promising on paper had eroded to a fraction of its former size. Washed over by waves at high tide, it was no longer suitable turtle-nesting habitat.

But luck did not entirely desert me. I did find one island where nests were hatching. Water visibility was not ideal, but I was able to get the first underwater photos of hatchling flatbacks (below). 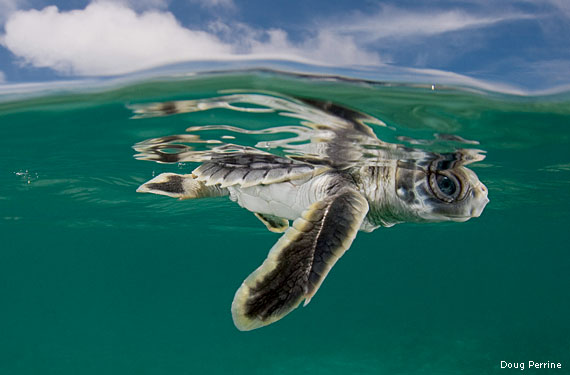 Finally, in November 2011 I checked into a mainland hotel and chartered a boat to take me to an island (which I leave nameless for the sake of the turtles living there) where I might find my elusive quarry. Strong currents made swimming around the island difficult, and the limited and inconsistent visibility made it hard to spot turtles underwater. Moreover, I needed to find flatbacks in “rest mode” on the bottom, which meant I had to make a very slow and nonthreatening approach to get within about 15 feet in order to photograph them.

I soon found myself peering through greenish water at an Australian flatback sea turtle resting on the sandy seafloor. Over the course of the next few days I learned which tides and winds produced the best water clarity, and after four days I had the underwater photos I had pursued for so long—but too late for my book, which came out in 2003. Still, I was the only person on the planet to have taken underwater photographs of all the world’s sea turtle species.

While flatbacks are not believed to be in great danger, a number of threats may impact the species in the future, including climate change, coastal erosion, nest predation and commercial development. The flatback is the most poorly understood of all sea turtles, largely ignored even though resources for researching and conserving other sea turtle species have expanded exponentially during the past few decades. I like to believe that seeing the beauty of these fascinating creatures and their native environment in my photographs will spark an interest in someone, somewhere, that will lead to better stewardship of this neglected but important component of Australia’s tropical marine environment.

NWF in Action: Saving the Endangered

NWF has a long history, dating to the 1930s, of protecting imperiled species both in the oceans and on land, from sea otters and sea turtles to grizzly bears and gray wolves. To learn more about the Federation’s activities for endangered wildlife, visit www.nwf.org/endangered.

Doug Perrine has written frequently for National Wildlife on marine subjects such as whale sharks.