After braving treacherous Alaskan weather to get close to a herd of musk oxen, Florian Schulz takes a photo of a lifetime 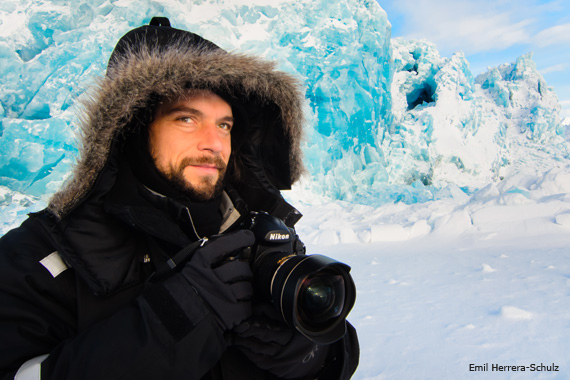 MY EYE WAS GLUED to my camera’s viewfinder as I watched every move of a big musk ox bull that was surrounded by his harem some 15 yards in front of me. I was hunkered down on the ground, resting my telephoto lens on frozen rocks. The bull’s eyes studied me in return. Above them curled powerful horns, bleached and cracked and resembling the branches of a thousand-year-old tree. There was something ancient about these animals—and for good reason.

Musk oxen have inhabited parts of the Arctic for thousands of years. Today in North America, they range primarily in Canada, Greenland and Alaska, where the animals were reintroduced several years ago to replace populations that long ago disappeared. Weighing as much as 900 pounds, they are well-adapted to survive in the frigid domain where I was attempting to photograph them.

As part of a year-long project to photograph wildlife in the Far North, I was in Arctic Alaska during winter. It had taken me several days to get near this particular group of musk oxen. I had learned to stay close to the ground—often lying on my stomach and sliding closer to the animals foot by foot—because my low profile was less intimidating. I wanted to prevent them from stampeding and burning valuable energy.

Generally, however, the burly creatures’ instincts tell them to stay put. Instead of fleeing when threatened, they tend to form a tight group with their heads facing out and the calves placed in the center for protection. Sometimes, however, musk oxen are less docile and defensive and may attack in a stampede, or a lone bull will charge to protect the herd. I tried to read the bull in front of me, hoping to anticipate how he would react.

Fortunately, he seemed unconcerned with my presence and went back to herding the harem. As I lay there, I wondered what these animals survive on. No matter where I looked, there was not a tree, bush or even a blade of grass in sight. I saw only loose rocks covered by wind-blown snow. What could they possibly find in this barren landscape that would sustain their large bodies?

The next day, I discovered the answer. I woke up well before sunrise and began searching for the musk oxen. To my surprise, I eventually found them in what seemed to be one of the worst locations: an area where the wind beats in full force across the face of a steep mountain. There, I watched the animals dig to get to their food source—lichens growing on rocks beneath the snow cover. As the sun started to peek over the horizon, I pulled out my wide-angle lens and carefully framed the entire group just as the hair of the musk oxen began to glow with the first morning rays.

With the force of the wind picking up by the hour, I spent most of the following day in a protected valley waiting for the dramatic light of the evening to set in. With the wind chill, the temperature felt much colder than the recorded 20 degrees below 0 F. As I approached a group of bulls, I found myself wishing for a musk ox’s coat to protect myself from the weather. Their long, shaggy guard hair hangs from their bodies like beautiful overcoats. Underneath, their wool is eight times warmer than the highest-quality sheep wool.

Standing on the tundra, I felt the gripping cold and wind-blown snow crystals lashing my face like grains of sand. But I was excited about the frigid turn in the weather, which allowed me to create images that show the true Arctic conditions musk oxen have to withstand many times during the course of a year. Soon the wind became so intense that the animals almost disappeared behind a curtain of blowing snow. I tried to get close enough to photograph them before the sun dipped behind the ridgeline. Dropping to my knees, I framed the scene just as the last rays cast pink light on the musk oxens’ fur. Then something magical happened.

Three bulls took off from the group, heading directly toward the setting sun. For an instant they were in perfect formation. The blowing snow was so thick that the animals seemed to be floating miraculously above the ground. I recorded the scene with my camera—a photograph of a lifetime and worth everything I had to endure to get it. 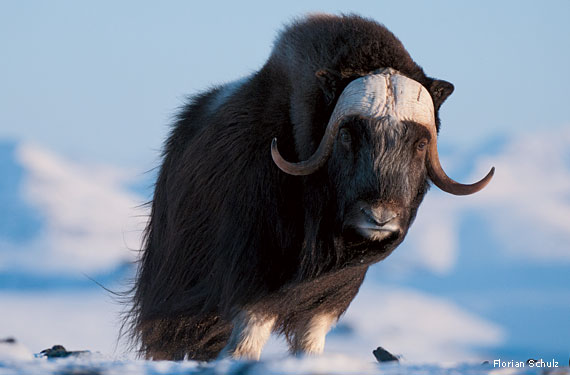 To avoid posing a threat while taking photos of this musk ox bull, the author crawled slowly on his belly for several yards across the Alaska tundra. “I had learned to stay close to the ground,” says Schulz, who spent a year photographing wildlife in the Far North. 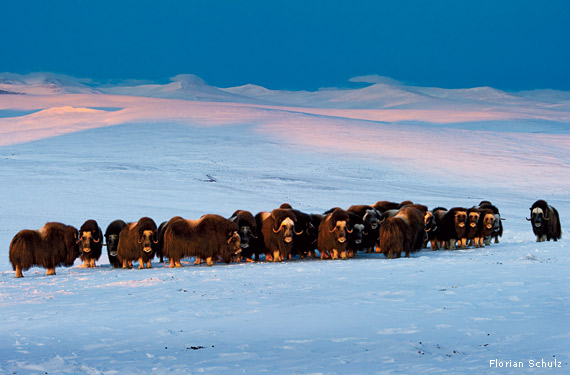 At dawn, a musk ox herd huddles close for protection against the harsh winter conditions. Beneath their shaggy guard hairs, the animals have a thick layer of fur that is several times warmer than the highest-quality sheep wool. “I found myself wishing for a musk ox’s coat to protect myself from the weather,” says Schulz. 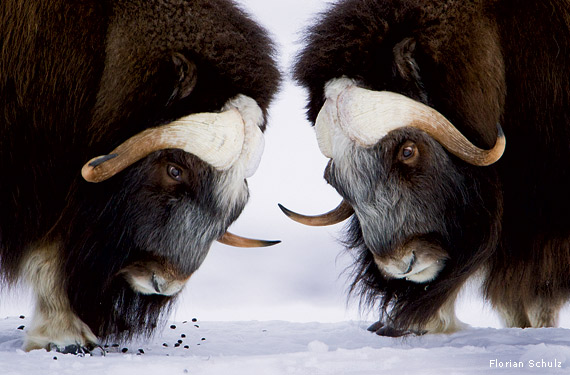 Possibly play-fighting in preparation for breeding season later in the year, two bulls spar on the frozen ground. A dominant male may breed multiple times with each of the half-dozen females in his harem. 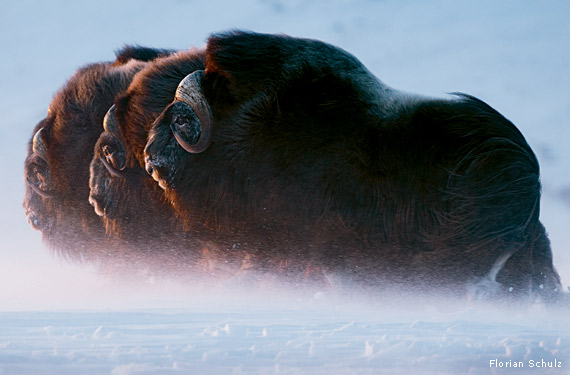 Seemingly floating off the ground in perfect unison, three bulls charge headlong into the thick, hard-blowing snow. Schulz calls the image “a photograph of a lifetime.”

Protecting musk oxen, polar bears and other Arctic wildlife is a high priority for NWF. The Federation and its partners are working to help shift the United States to a clean-energy economy. They also are seeking to safeguard habitats in the Far North by advocating for national and international policies that will reduce greenhouse gas emissions, including carbon dioxide pollution from burning of fossil fuels such as coal. As part of its educational efforts, NWF has created special curricula for schools and published several reports for the public on the effects of climate change. To learn more, visit www.nwf.org/globalwarming and www.eco-schoolsUSA.org. 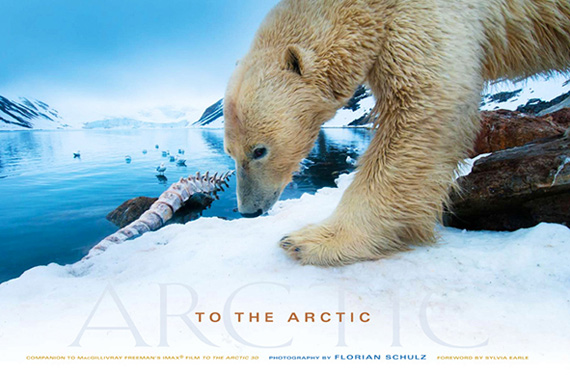 Photographer Florian Schulz’s text and photos from his year-long Far North adventure appear in his latest book To the Arctic (The Mountaineers Books, 2011), from which this article was excerpted.