Crafty Mussels Use Mimicry and Muscle 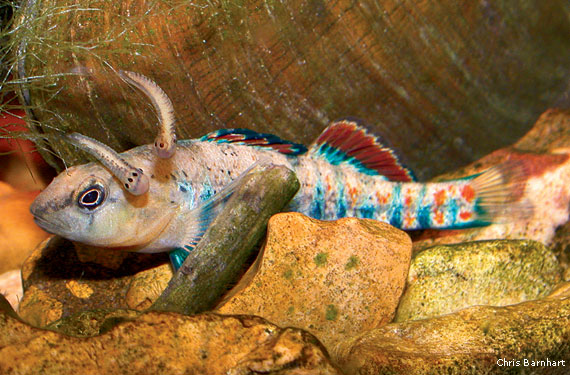 BURIED BENEATH THE SAND AND GRAVEL of North America’s streams and rivers lie wonders of evolution: freshwater mussels. In spring, female bivalves, seemingly simple organisms, use clever tricks to help their progeny survive.

Their goal is to lure a fish closer so that their larvae may use their tiny shells to clamp onto its gills. The fish forms a cyst around the larvae, and there the young mussels hitchhike, continuing to develop for several weeks until they are ready to drop off in their new habitat.

Some species, such as the snuffbox (below) and riffleshell, take a direct approach to finding a host for their young: They trap unwary fish with a quick snap of their shells and then douse them with a cloud of tiny larvae. Still others rely on luck: The giant floater releases her larvae in mucus webs that stick to fish as they swim by. 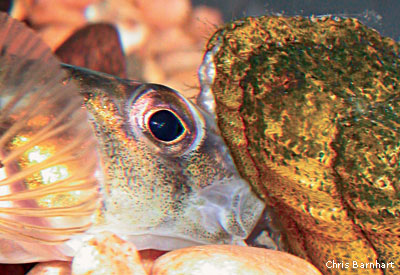 Other mussels deploy elaborate lures to attract a specific species. The Ouachita kidneyshell (above), for example, releases larvae in packages that look like insect larvae or small fish. When a larger, hungry fish bites the package, it bursts, releasing the larvae so they reach the fish’s gills. Like a fisherman, the shiny-rayed pocketbook reels out a clump of its larvae on a long thread of mucus that flitters in the current like a tiny fish. The broken-ray has evolved a lure from the soft tissue inside its shell that is a dead-ringer for a minnow (below). “It’s a visual lure created by a blind animal that has no way of appreciating what a fish looks like,” marvels Chris Barnhart, a freshwater mussel expert at Missouri State University.

Freshwater mussels live in rivers and lakes throughout most of the world, but North America has the greatest number of species—more than 300. The Mississippi River and its tributaries alone boast more than three times as many species as the Amazon.

Mussels perform important functions in aquatic ecosystems. A single adult can filter pollutants from 8 to 9 gallons of water per day and store toxic metals in its shell. The nutrients mussels collect from water and excrete as feces help nourish insects and algae. Many other creatures that live in and near water, including birds, otters, muskrats and fish, eat the mussels themselves.

Yet these ecologically important filter-feeders are among the most imperiled organisms on the planet.

Until the late 19th century, U.S. streams and rivers were thick with mussels. Naturalists wrote of walking for miles on mussel beds. But in 1891, Johann Boepple, a German immigrant in Iowa, began making buttons for clothing out of mussel shells. The button business became so profitable that factories quickly sprung up throughout the Mississippi River Basin to process mussels. “They were overharvested terribly,” says Barnhart.

The worst blow has come from dams, which have ruined the habitat of many once-rich mussel beds. “They’re gone forever,” says James Williams, an aquatic biologist at the Florida Museum of Natural History in Gainesville. Dams replace fast-running shoals with reservoirs, changing the water quality. They also release water that is too cold and oxygen-poor for many downstream species of mussel. In addition, dams often prevent migratory fish, potential mussel hosts, from swimming upstream. For example, last year Robert Bringolf, an ecotoxicologist at the University of Georgia, discovered the highly endangered purple bankclimber mussel depends on just one fish species to serve as host for its young, the threatened Atlantic sturgeon, which is stymied during migration by a massive dam in southern Georgia.

Starting in the 1970s, even mussels in smaller, healthy streams started to mysteriously disappear. Something, potentially pesticides, seems to have hindered their reproduction, leaving just a few old mussels behind, says Wendell Haag, an ecologist at the U.S. Forest Service. All told, about 30 North American mussel species are known or presumed extinct and about 31 percent of surviving species are listed by federal authorities as threatened or endangered.

The 1972 Clean Water Act’s mandates have led to improvements in sewage treatment and lessened industrial pollution in U.S. waters. This, along with increased awareness of mussel habitat needs, has allowed some of the creatures’ populations to recover somewhat in recent years. In the Cahaba River in Alabama, relict populations of rare mussels such as the triangular kidneyshell dramatically expanded in the 1990s. And modifications to a dam on the Duck River in Tennessee increased the amount of oxygen in the water. Mussels there have since “rebounded immediately and dramatically,” says Paul Johnson, director of the Alabama Aquatic Biodiversity Center.

This center and similar facilities in more than a dozen states and Canada have cultivated millions of mussels for release into the wild. This has helped reestablish or bolster populations, including a handful of extremely rare species, such as the Coosa moccasinshell in Georgia and Tennessee. “We reduce the risk of extinction if something happens to the one place they remain,” says Johnson. 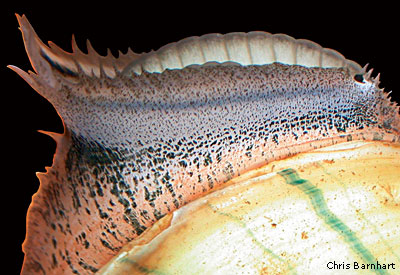 “On the whole, we’ve slowed down the decline,” says Williams, but dangers for mussels continue. Pharmaceuticals in wastewater can impair reproduction, and invasive species, like the black carp that eat mussels and zebra mussels that outcompete them for habitat and food, are growing problems. What worries Bringolf most, however, is increasing development. As suburbs expand, more pollution and road salt, which essentially dehydrates mussels, drain from parking lots into rivers, lakes and wetlands. And more people means higher demand to take water from mussel habitat.

Experts predict that rare species will continue to vanish during the coming decades unless more is done to ensure enough clean, freeflowing aquatic habitat exists for these evolutionary wonders to survive. “There are mysterious and wonderful organisms living in our own backyards,” Barnhart says, “and they are being lost.” Still, it’s not too late to help, he says, or even to wade into clear streams with a face mask in spring to see these exotic creatures shaking their lures.

NWF is working to restore the full strength of the 1972 Clean Water Act, which recent Supreme Court decisions have weakened, allowing pollution into streams, rivers, lakes and wetlands. Doug Inkley, NWF senior scientist, says that protecting such habitat is critical. “Mussels are a key part of our aquatic ecosystems,” he says. “We are working extensively to protect the waters of the United States.”

Erik Stokstad is a staff writer for Science magazine.