The Culture of Cetaceans 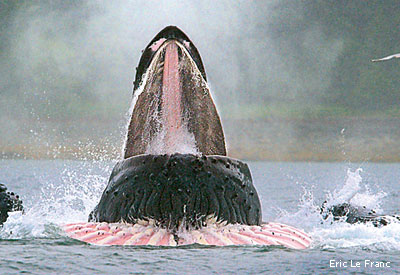 A RECENT STUDY OF HUMPBACK WHALES  shows that the cetaceans learn new hunting techniques from one another, a form of cultural transmission like that underlying much of human behavior. Published earlier this year in Science, the study, by biologists from Scotland’s University of St. Andrews, England’s Anglia Ruskin University and the Whale Center of New England, focused on a community of humpback whales feeding on Stellwagen Bank, off New England. The whales were forced to find new prey after herring stocks—their preferred food—crashed in the early 1980s. The whales’ new strategy—hitting the water with their tails (called “lobtailing”) while hunting a different prey, the sand lance—has spread through the population.

By 2007, the biologists observed nearly 40 percent of Stellwagen humpbacks lobtailing. Luke Rendell, of the University of St. Andrews, says, “Our study really shows how vital cultural transmission is in humpback populations—not only do they learn their famous songs from each other, they also learn feeding techniques that allow them to buffer the effects of changing ecology.” Humpbacks around the world herd shoals of prey by blowing bubbles underwater to produce “bubble nets.” The Stellwagen whales now lobtail before diving to bubble.