Rattlesnakes on the Hunt 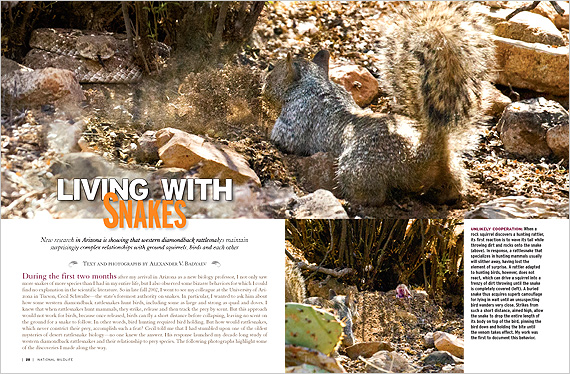 DURING THE FIRST TWO MONTHS after my arrival in Arizona as a new biology professor, I not only saw more snakes of more species than I had in my entire life, but I also observed some bizarre behaviors for which I could find no explanation in the scientific literature. So in late fall 2002, I went to see my colleague at the University of Arizona in Tucson, Cecil Schwalbe—the state’s foremost authority on snakes. In particular, I wanted to ask him about how some western diamondback rattlesnakes hunt birds, including some as large and strong as quail and doves. I knew that when rattlesnakes hunt mammals, they strike, release and then track the prey by scent. But this approach would not work for birds, because once released, birds can fly a short distance before collapsing, leaving no scent on the ground for a snake to follow. In other words, bird hunting required bird holding. But how would rattlesnakes, which never constrict their prey, accomplish such a feat? Cecil told me that I had stumbled upon one of the oldest mysteries of desert-rattlesnake biology—no one knew the answer. His response launched my decade-long study of western diamondback rattlesnakes and their relationship to prey species. These photographs highlight some of the discoveries I made along the way.

Unlikely cooperation: When a rock squirrel discovers a hunting rattler, its first reaction is to wave its tail while throwing dirt and rocks onto the snake (above). In response, a rattlesnake that specializes in hunting mammals usually will slither away, having lost the element of surprise.

A rattler adapted to hunting birds, however, does not react, which can drive a squirrel into a frenzy of dirt throwing until the snake is completely covered. A buried snake thus acquires superb camouflage for lying in wait until an unsuspecting bird wanders very close. Strikes from such a short distance, aimed high, allow the snake to drop the entire length of its body on top of the bird, pinning the bird down and holding the bite until the venom takes effect. My work was the first to document this behavior. 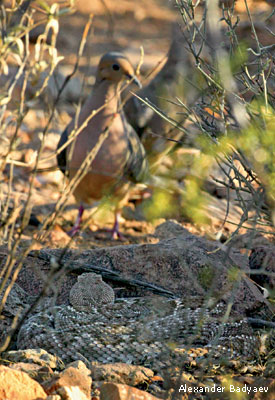 Necessary rituals: All desert birds that are potential prey for diamondbacks, such as the mourning dove (left), engage in complex behavioral rituals that let a snake know it has been discovered. Such displays vary among species, but usually the bird faces the snake and repeatedly points to it with its beak, head crest or spread wings.

Birds have a reaction time comparable to that of snakes and can evade a strike unless surprised. Because strikes are costly for snakes in terms of energy and risk—notice a cactus spine sticking out of the right side of the snake’s head—snakes will not strike once they have been discovered by birds. For this reason, the camouflage provided by rock squirrels is essential for successful bird hunting. 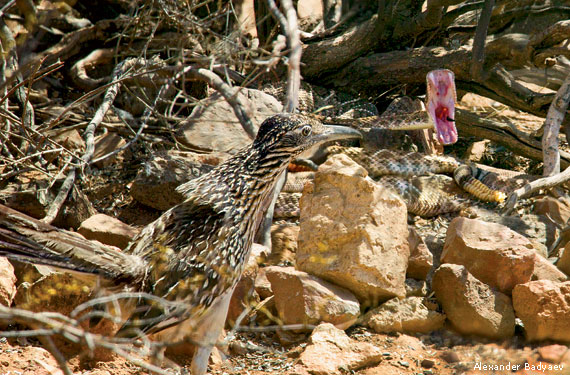 In a Darwinian turn of events, rattlesnakes sometimes find themselves being hunted by birds such as roadrunners (below), hawks and owls. 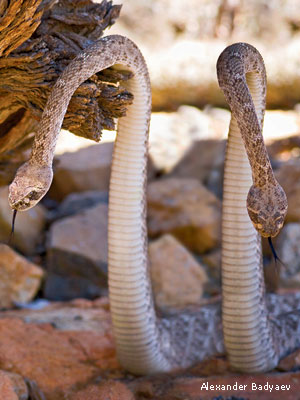 Elegance and cheating: Male western diamondback rattlesnakes establish hierarchies during elegant but energetically demanding bouts of wrestling in which the male that stays off the ground longest wins. Here an inventive male (left) stacks the deck in his favor by using a dead tree as a crutch to remain in the upright position. My colleagues and I carefully marked territories of local snakes and found that this male, for a few years, was able to monopolize the breeding territories of several neighboring females, likely enjoying exceptional fecundity. 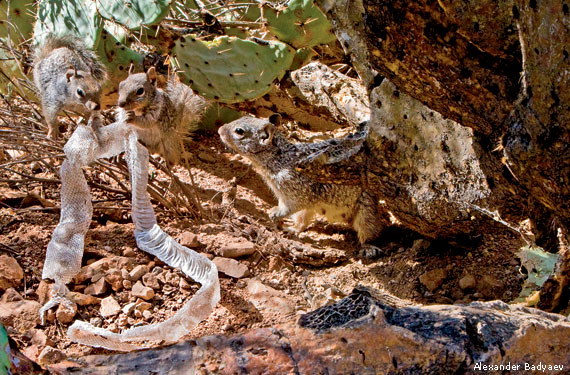 Skin lesson: A mother rock squirrel (below) brings her pups a western diamondback rattlesnake skin from a nearby packrat nest. The recently emerged pups play with the skin, learning its smell, taste and texture, until nothing is left of it. This lesson is the pups’ introduction to their life-long neighbor and frequent enemy. Although adult rock squirrels are immune to diamondback venom, the juveniles are not. Coexistence between squirrel and snake yields complex behavioral patterns, as when the squirrels serve as unwitting partners in helping a snake capture feathered prey.

To see more of Alexander Badyaev's photos of rattlers and other animals, visit www.tenbestphotos.com