Tips for outwitting these clever thieves at your bird feeders 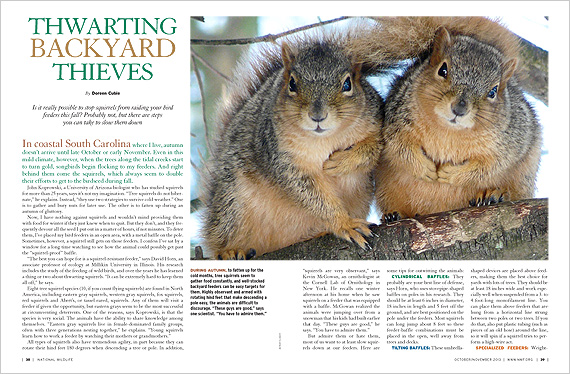 IN COASTAL SOUTH CAROLINA WHERE I LIVE, autumn doesn’t arrive until late October or early November. Even in this mild climate, however, when the trees along the tidal creeks start to turn gold, songbirds begin flocking to my feeders. And right behind them come the squirrels, which always seem to double their efforts to get to the birdseed during fall.

John Koprowski, a University of Arizona biologist who has studied squirrels for more than 25 years, says it’s not my imagination. “Tree squirrels do not hibernate,” he explains. Instead, “they use two strategies to survive cold weather.” One is to gather and bury nuts for later use. The other is to fatten up during an autumn of gluttony.

Now, I have nothing against squirrels and wouldn’t mind providing them with food for winter if they just knew when to quit. But they don’t, and they frequently devour all the seed I put out in a matter of hours, if not minutes. To deter them, I’ve placed my bird feeders in an open area, with a metal baffle on the pole. Sometimes, however, a squirrel still gets on those feeders. I confess I’ve sat by a window for a long time watching to see how the animal could possibly get past the “squirrel-proof” baffle.

“The best you can hope for is a squirrel-resistant feeder,” says David Horn, an associate professor of ecology at Millikin University in Illinois. His research includes the study of the feeding of wild birds, and over the years he has learned a thing or two about thwarting squirrels. “It can be extremely hard to keep them all off,” he says.

Eight tree squirrel species (10, if you count flying squirrels) are found in North America, including eastern gray squirrels, western gray squirrels, fox squirrels, red squirrels and Abert’s, or tassel-eared, squirrels. Any of them will visit a feeder if given the opportunity, but eastern grays seem to be the most successful at circumventing deterrents. One of the reasons, says Koprowski, is that the species is very social. The animals have the ability to share knowledge among themselves. “Eastern gray squirrels live in female-dominated family groups, often with three generations nesting together,” he explains. “Young squirrels learn how to work a feeder by watching their mothers or grandmothers.” 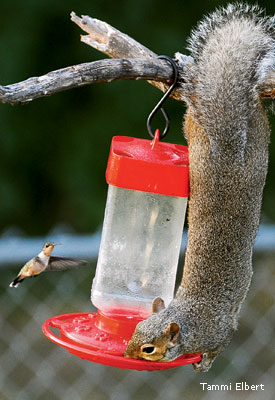 All types of squirrels also have tremendous agility, in part because they can rotate their hind feet 180 degrees when descending a tree or pole. In addition, “squirrels are very observant,” says Kevin McGowan, an ornithologist at the Cornell Lab of Ornithology in New York. He recalls one winter afternoon at his home when he saw squirrels on a feeder that was equipped with a baffle. McGowan realized the animals were jumping over from a snowman that his kids had built earlier that day. “These guys are good,” he says. “You have to admire them.”

Tips for Slowing Down Squirrels

But admire them or hate them, most of us want to at least slow squirrels down at our feeders. Here are some tips for outwitting the animals:

Cylindrical Baffles: They probably are your best line of defense, says Horn, who uses stovepipe-shaped baffles on poles in his research. They should be at least 6 inches in diameter, 18 inches in length and 5 feet off the ground, and are best positioned on the pole under the feeders. Most squirrels can long jump about 8 feet so these feeder-baffle combinations must be placed in the open, well away from trees and decks.

Tilting Baffles: These umbrella-shaped devices are placed above feeders, making them the best choice for yards with lots of trees. They should be at least 18 inches wide and work especially well when suspended from a 3- to 4-foot-long monofilament line. You can place them above feeders that are hung from a horizontal line strung between two poles or two trees. If you do that, also put plastic tubing (such as pieces of an old hose) around the line, so it will spin if a squirrel tries to perform a high-wire act.

Specialized Feeders: Weight-activated bird feeders drop down and block access to the seed when a squirrel steps on the perch. They can be effective, though some individuals learn to get to the food without tripping the cover. McGowan says this type of feeder works well for him, especially because he likes to feed flying squirrels, which are not heavy enough to trip it. If you are mostly interested in attracting small songbirds to your feeders, another possibility is to use a feeder surrounded by a wire cage. Any bird cardinal-sized or larger can’t get in. A third option is a feeder that will spin when a squirrel lands on it. The animal can’t hang on for long and is deposited safely on the ground. All of these specialized feeders can be purchased at garden centers or bird-supply stores.

Safflower Seeds: This grain is frequently advertised as being unappealing to squirrels, but Horn has found that’s not necessarily the case. “There seem to be regional differences,” he says. In his studies, squirrels avoid safflower seed about 50 percent of the time. Unfortunately, many bird species don’t like safflower either, so it may make your feeder less desirable to them.

Spicing It Up: Capsaicin, the substance that makes chili peppers hot, is sometimes added to birdseed mixes to discourage squirrels. “It has no deleterious effect on birds,” says McGowan. “Avian nerve endings aren’t shaped the same way as mammals.” However, McGowan cautions that it should be used with care. Getting capsaicin in your eyes can be extremely unpleasant. Also, says McGowan, “squirrels can build up a tolerance,” though it does slow them down in the beginning without harming the animals. “Try it,” he suggests, “but don’t count on it.”

Squirrel Spookers: These clever devices can be used alone or with a baffle. They work by attaching a movable sleeve, held in place with a counterweight, to a feeder pole. When a squirrel steps on it, the sleeve slides down and the animal loses its footing. Then the apparatus moves back into place, waiting for the next challenger. Simpler spooking devices include putting a slinky on the pole or hanging DVDs near the feeders.

Divide and conquer: Another alternative is to set up a feeding station just for the squirrels, stocked with cracked corn or peanuts in the shell. If you have baffles on your bird feeders and no baffle on these diversion feeders, you can usually solve the problem. However, you can run through a lot of food. And if you have raccoons or opossums in your yard, this option is not a good idea. 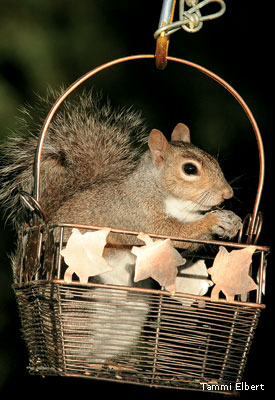 Things Not To Do: Don’t put grease or petroleum jelly on the feeder pole. “Imagine if that substance was on you,” says Horn. It can coat the fur of a squirrel or get in the feathers of a bird. Also, don’t hang mothballs. They are a registered pesticide and should be used only as directed.

“Every yard is different,” says Horn. He points out it will take some trial and error to figure out what works best for you, which usually involves some combination of deterrents. But no matter what, says Horn, “have fun exploring your options.” Part of the enjoyment of feeding birds is matching wits with squirrels.

Make Your Yard a Wildlife Haven

Want to learn how to entice native wildlife to your property? For a wide range of tips, information about appropriate plants to cultivate and how to join NWF’s Certified Wildlife Habitat® program, visit www.nwf.org/nwfgarden.