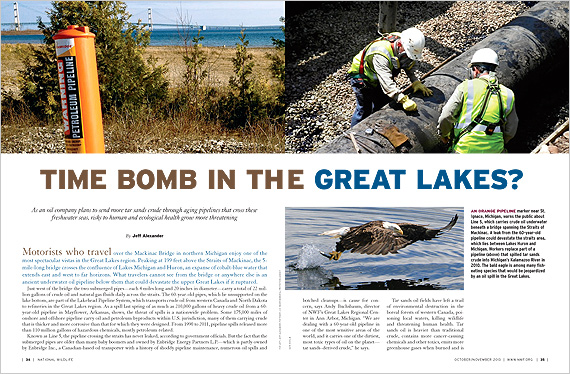 MOTORISTS WHO TRAVEL OVER THE MACKINAC BRIDGE in northern Michigan enjoy one of the most spectacular vistas in the Great Lakes region. Peaking at 199 feet above the Straits of Mackinac, the 5-mile-long bridge crosses the confluence of Lakes Michigan and Huron, an expanse of cobalt-blue water that extends east and west to far horizons. What travelers cannot see from the bridge or anywhere else is an ancient underwater oil pipeline below them that could devastate the upper Great Lakes if it ruptured.

Just west of the bridge the two submerged pipes—each 4 miles long and 20 inches in diameter—carry a total of 22 million gallons of crude oil and natural gas fluids daily across the straits. The 60-year-old pipes, which lie unsupported on the lake bottom, are part of the Lakehead Pipeline System, which transports crude oil from western Canada and North Dakota to refineries in the Great Lakes region. As a spill last spring of as much as 210,000 gallons of heavy crude oil from a 60-year-old pipeline in Mayflower, Arkansas, shows, the threat of spills is a nationwide problem. Some 175,000 miles of onshore and offshore pipeline carry oil and petroleum byproducts within U.S. jurisdiction, many of them carrying crude that is thicker and more corrosive than that for which they were designed. From 1990 to 2011, pipeline spills released more than 110 million gallons of hazardous chemicals, mostly petroleum related.

Known as Line 5, the pipeline crossing the straits has never leaked, according to government officials. But the fact that the submerged pipes are older than many baby boomers and owned by Enbridge Energy Partners L.P.—which is partly owned by Enbridge Inc., a Canadian-based oil transporter with a history of shoddy pipeline maintenance, numerous oil spills and botched cleanups—is cause for concern, says Andy Buchsbaum, director of NWF’s Great Lakes Regional Center in Ann Arbor, Michigan. “We are dealing with a 60-year-old pipeline in one of the most sensitive areas of the world, and it carries one of the dirtiest, most toxic types of oil on the planet—tar sands–derived crude,” he says.

Tar sands oil fields have left a trail of environmental destruction in the boreal forests of western Canada, poisoning local waters, killing wildlife and threatening human health. Tar sands oil is heavier than traditional crude, contains more cancer-causing chemicals and other toxics, emits more greenhouse gases when burned and is extremely difficult to clean up because it can sink in water.

As tar sands oil production has increased during the past decade, most refineries in the Great Lakes region have been retrofitted for processing the fuel. “The Midwest and the Great Lakes basin are quickly becoming the anchor for tar sands transportation and refining,” says Beth Wallace, community outreach coordinator at NWF’s Great Lakes Regional Center. Transporting diluted tar sands oil (dilbit) through the pipelines amplifies the risk of spills because the major oil pipelines in the Great Lakes region were designed to transport lighter conventional crudes. Dilbit requires higher pressures, which heats pipelines and increases the likelihood of corrosion and ruptures.

Good reasons exist for concern about tar sands oil transportation in the lakes region. The Great Lakes hold 20 percent of all surface freshwater on the planet and provide drinking water for 30 million people. The backbone of one of the world’s largest regional economies, including a fishery worth $7 billion annually, the lakes also are home to species ranging from moose to endangered piping plovers.

The pipeline crossing the Straits of Mackinac, and near some of the region’s best trout streams, is one of the biggest in the Midwest in terms of volume, and it’s now carrying more oil than ever. Enbridge Partners recently began pumping 10 percent more oil through Line 5 by boosting the horsepower in pumps along the route, according to company officials. The company also has proposed a series of small pipeline projects that will result in a system-wide expansion, allowing Enbridge to ship dilbit from Alberta to Maine, much of it via the Straits of Mackinac, where the pipeline load will increase by 1.8 million gallons daily.

Such increases in volume likely would have generated little public concern prior to 2010, but the political landscape changed that year after an Enbridge Partners pipeline ruptured in southern Michigan and dumped about 1 million gallons of tar sands crude into the Kalamazoo River. That disaster was the largest inland oil spill ever in the lower 48 states, sickening more than 300 people, killing an undetermined number of fish and birds and perhaps disrupting the river ecosystem for decades. The U.S. Department of Transportation’s Pipeline and Hazardous Materials Safety Administration (PHMSA) fined Enbridge a record $3.7 million for that mess. Cleanup, still in progress, will cost an estimated $1 billion.

Federal investigators were scathing in their critique of Enbridge Partners, likening the company to the Keystone Kops. They concluded that the spill—which occurred in a section of pipeline roughly the same age as the pipes that cross the Straits of Mackinac—was caused by the company’s failure to repair known pipeline defects and by lax government oversight of pipeline maintenance and spill-response plans.

The Kalamazoo disaster raises a disturbing possibility: With the increase in the amount of oil moving through Line 5, a spill in the Straits of Mackinac could dwarf the extensive water pollution and health effects that the Kalamazoo incident inflicted on people and wildlife. Line 5 carries twice as much oil as the pipeline that polluted 35 miles of the river. According to the Enbridge Partners emergency response plan, the company needs a minimum of 8 minutes to shut down a ruptured pipeline and isolate flow from a leak. For Line 5, the company has estimated that in a worst-case scenario, 1.5 million gallons of oil would be released during that time. However, reality could be much worse. Enbridge didn’t react to the Kalamazoo spill for 17 hours despite warnings from the company’s leak-detection system. 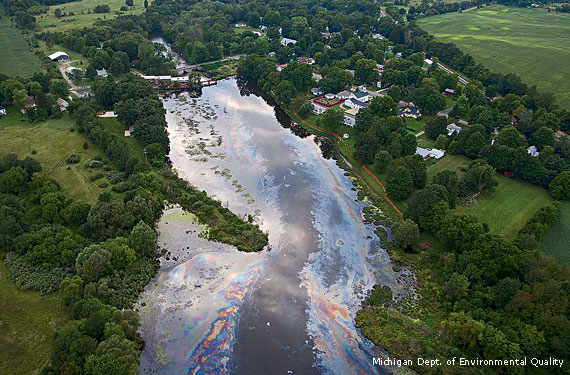 The potential for a pipeline rupture in the straits isn’t an imaginary threat. Enbridge Inc. pipelines have suffered nearly 800 spills nationally since 1999, discharging about 6.8 million gallons of oil, according to a 2012 NWF analysis of government data. Eighty of those spills occurred since 2001 along the Lakehead Pipeline System. Several occurred on the same pipeline that crosses the Straits of Mackinac but in other locations. Last year, PHMSA ordered Enbridge Partners to clean up its act, citing a history of failures “throughout all parts of the Lakehead System.”

Enbridge spokesman Larry Springer says inspections of the interior and exterior of the twin pipes that cross the Straits of Mackinac have consistently found they are in good condition and safe, though he declined to share any inspection reports. Enbridge Partners  also has conducted joint training exercises with the U.S. Coast Guard to improve oil-spill response capabilities in the straits, Springer says, adding that the pipes crossing the straits are more resistant to leaks than are typical pipelines, the walls of which are one-quarter to one-half inch. “Each of the twin 20-inch pipes has a wall thickness of more than 0.75 inch—an over-engineering factor that goes far beyond what’s necessary to provide an extra safety margin to the pipe-wall strength,” Springer says.

Thicker pipes are more durable than thinner versions but not indestructible, according to Steven Wright, a professor of civil and environmental engineering at the University of Michigan who studies pipelines. Pipe thickness may not even offer meaningful protection because many pipeline leaks, he says, are caused by cracks or corrosion along welded seams and joints and can occur on pipelines of any size as they age. “The welded joints present the greatest risk” of leaking oil, Wright says. PHMSA data support that claim: Bad welds and faulty materials are blamed for a quarter of all pipeline failures in the United States since 1993.

NWF wants Enbridge to replace the 60-year-old underwater pipes. Company officials have contended, however, that there is no reason to do so. “A well-maintained pipeline can last indefinitely,” according to the Enbridge website. That statement surprised Wright. “Indefinitely sounds too optimistic to me,” he says.

The Federation has recommended that Enbridge develop more response centers in Michigan’s upper and lower peninsulas and that state and federal agencies strengthen pipeline regulations designed to protect the Great Lakes against oil spills. NWF also has filed a petition asking the U.S. Environmental Protection Agency and PHMSA to stop shipments of tar sands–derived crude through any U.S. pipelines until stronger safety regulations are enacted.

PHMSA officials say the agency has increased the penalties for pipeline-maintenance violations, hired more inspectors, held numerous safety seminars and levied more fines since the 2010 Kalamazoo River spill. Nevertheless, Wallace says, existing pipeline regulations are still inadequate, and government officials are too trusting of Enbridge executives and their claims that the company has improved its pipeline operations. “Enbridge asked federal officials to trust them to fix their damaged pipelines just 10 days before the Kalamazoo River spill, and we all know where that got us,” Wallace says.

NWF in Action: Fighting for the Great Lakes

NWF is working throughout the nation, from Alaska to the Gulf of Mexico, to help prevent the threat of oil spills and other hazards stemming from the use of fossil fuels. The Federation also plays a wide range of roles in the Great Lakes. In addition to helping ensure that pipeline networks are properly regulated and that dangerous pipelines are kept out of the region, NWF is working to protect the lakes from pollution by farm runoff, air-borne mercury and other toxics and from fossil-fuel pollution that causes global climate change. The Federation also is leading the charge to prevent the spread of Asian carp and other ecologically dangerous foreign species from invading the lakes, and it is defending a premier tributary of Lake Superior from a proposed sulfide mine. To learn more, visit www.nwf.org/greatlakes.

Jeff Alexander is the coauthor, with Beth Wallace, community outreach coordinator at NWF’s Great Lakes Regional Center, of the NWF report  Sunken Hazard: Aging oil pipelines beneath the Straits of Mackinac an ever-present threat to the Great Lakes.


Help NWF protect wildlife against climate change and other threats >>