Raccoons: A League of Their Own 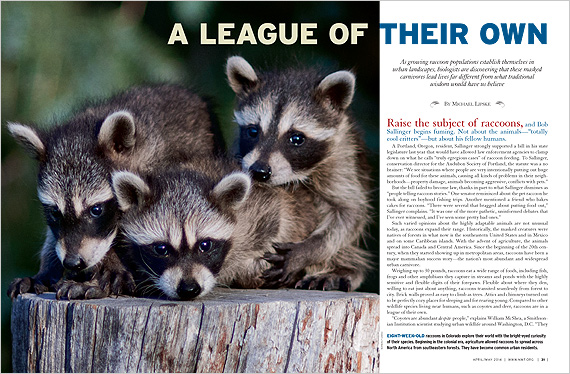 RAISE THE SUBJECT OF RACCOONS, and Bob Sallinger begins fuming. Not about the animals—“totally cool critters”—but about his fellow humans.

A Portland, Oregon, resident, Sallinger strongly supported a bill in his state legislature last year that would have allowed law enforcement agencies to clamp down on what he calls “truly egregious cases” of raccoon feeding. To Sallinger, conservation director for the Audubon Society of Portland, the statute was a no brainer: “We see situations where people are very intentionally putting out huge amounts of food for these animals, causing all kinds of problems in their neighborhoods—property damage, animals becoming aggressive, conflicts with pets.”

But the bill failed to become law, thanks in part to what Sallinger dismisses as “people telling raccoon stories.” One senator reminisced about the pet raccoon he took along on boyhood fishing trips. Another mentioned a friend who bakes cakes for raccoons. “There were several that bragged about putting food out,” Sallinger complains. “It was one of the more pathetic, uninformed debates that I’ve ever witnessed, and I’ve seen some pretty bad ones.”

Such varied opinions about the highly adaptable animals are not unusual today, as raccoons expand their range. Historically, the masked creatures were natives of forests in what now is the southeastern United States and in Mexico and on some Caribbean islands. With the advent of agriculture, the animals spread into Canada and Central America. Since the beginning of the 20th century, when they started showing up in metropolitan areas, raccoons have been a major mammalian success story—the nation’s most abundant and widespread urban carnivore.

Weighing up to 30 pounds, raccoons eat a wide range of foods, including fish, frogs and other amphibians they capture in streams and ponds with the highly sensitive and flexible digits of their forepaws. Flexible about where they den, willing to eat just about anything, raccoons transited seamlessly from forest to city. Brick walls proved as easy to climb as trees. Attics and chimneys turned out to be perfectly cozy places for sleeping and for rearing young. Compared to other wildlife species living near humans, such as coyotes and deer, raccoons are in a league of their own. 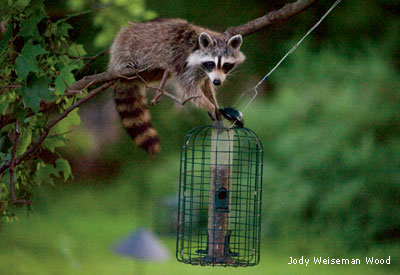 “Coyotes are abundant despite people,” explains William McShea, a Smithsonian Institution scientist studying urban wildlife around Washington, D.C. “They are able to fit in the cracks where people can’t see them and find them. Deer can tolerate people down to a certain density. I don’t think raccoons know any limits.” He laughs. “They like people. They like the things that people do, and they aren’t afraid of people. They’re not fitting in the cracks. They’re right out there!”

And they’re not just sauntering through kitchen cat doors or knocking over garbage cans. “Psycho killer raccoons terrorize Olympia” was the headline on an Associated Press story about a cat-killing, dog-chasing raccoon pack in Washington a few years back. In Seattle last year, a pair of raccoons camped out behind the cab of a construction crane 150 feet above the ground, temporarily shutting down the machine. In Alabama, a trespassing raccoon came crashing through the ceiling of a police station; a police sergeant gave the animal “10 out of 10” for the skill of its landing.

In Brooklyn, New York, a couple years back, realtor Suzanne DeBrango entered her kitchen one morning and was startled to see three raccoons—“Big ones!”—trying to break in through a window. Another time, she stepped out of her back door, and a raccoon “stood up on his legs, and he hissed at me.” Fed up with the neighborhood marauders, DeBrango hosted what she dubbed a “raccoon summit.” In a meeting at her home, neighbors complained to local politicians and the news media about the raccoons that were skittering along fence tops, breaking and entering, and otherwise disturbing the peace. The result? “They brought us some brochures,” DeBrango says with a note of resignation. “We got plenty of response, but there’s really nothing anybody can do.”

Raccoons have even gone global. In 1934, in an effort to “enrich the fauna” of the German countryside, forest superintendent Wilhelm Freiherr Sittich von Berlepsch released two pairs of former pet raccoons near a reservoir in the state of Hesse. A second group of about two dozen animals escaped from a fur farm east of Berlin during a 1945 air raid. Today, Germany’s raccoon population is nearing a million animals. Hunters complain about the threat to game birds from the waschbär. Conservationists warn that raccoons are eating the endangered European pond turtle. In some places, homeowners are using rocks and bungee cords in an effort to seal garbage cans. “The species is firmly established here,” biologist Ulf Hohmann, who works for a forest research institute in Trippstadt, Germany, told Spiegel Online. Raccoons have invaded other European countries as well.

In Japan, after the animated cartoon Rascal Raccoon became a hit in 1977, demand for raccoons as pets led to the import of more than 1,500 North American raccoons yearly before the craze ended. Cute and cuddly baby raccoons usually become fierce adults and end up being released. Raccoons today are at home in 42 of Japan’s 47 prefectures. On the nation island of Hokkaido alone, agricultural damage from the alien species is put at 30 million yen annually (about $290,000 U.S). A few years ago, rascal raccoons took up residence in the attic of Kyoto’s Byodo-in temple, a national treasure. Perhaps no one would have cared had the raccoons, on their comings and goings from the attic, not left long scratches on woodwork in the 10th-century structure.

Burgeoning urban raccoon populations have led to a series of new studies on the animals, yielding a revelation or two about their behavior. “Raccoons have been historically thought of as being solitary,” says Suzanne Prange, a mammalogist with the Ohio Department of Natural Resources. In areas with low population densities of raccoons that’s probably still the case. But using new tracking technology, Prange has shown that some raccoons are “much more social than we gave them credit for.”

Focusing on a high-density raccoon population in a forest preserve outside Chicago in 2005 and 2006, Prange fitted 42 animals with special proximity-detecting radio collars. Unlike old-style tracking collars, the new ones collected a wealth of precise information on every raccoon’s location simultaneously. In particular, the collars recorded whenever two or more raccoons came in close contact with each other and how long they stayed together.

Recent studies have shown that male raccoons tend to form loose social groups of two to five animals. “I’ve seen that at night when I’m radiotracking,” Prange says. “I’ll see three males just walking along the trail together.” Male raccoons also share dens, but the groups are anything but permanent. “It’s a very fluid system,” Prange says. It may help males to hunt more effectively, to defend territory from other male groups and, most importantly, to preserve exclusive access to females during the winter-spring breeding season. 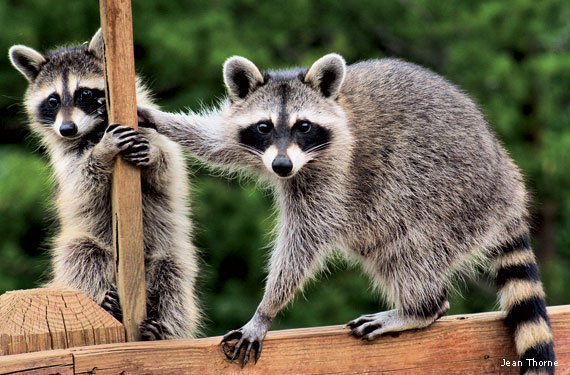 The big news from Prange’s research was the discovery that female raccoons also socialize. “They do interact with other females, and they spend more time with males than we thought.” According to Prange’s study, during mating season, “Some females essentially became temporary members of male groups.” She also documented cases of females sharing dens, particularly in winter.

In most cases, however, female-female contacts are at best “fleeting,” Prange says, and whatever associations they have are probably a way of coping with dense populations. She says the raccoons she studied live in “a fission-fusion society made up of short-term casual acquaintances and a smaller number of long-term positive associations.”

Her motive for studying raccoons was partly personal: “I’ve always been fond of raccoons. I have a good bit of respect for animals that can make a living and get by, even do well, in the face of changing landscapes and urbanization. No matter what we do, they seem to do just fine.”

Nevertheless, raccoons may be in decline in some places. Smithsonian scientist McShea thinks he is seeing fewer raccoons in suburbs he has studied. He wonders if disease is taking a toll. And another wily carnivore could be turning the tables on raccoons. “Coyotes are one of the few things that can take down raccoons,” McShea says. “It could be that the spread of coyotes is limiting raccoons to a certain extent.” As a result, in at least some corners of the raccoon universe “life is not as good as it used to be,” he adds, but the animals continue to thrive amid human neighbors.

Contrary to popular belief, raccoons do not “wash” their food. Scientists have never documented this behavior in the wild. Raccoons do feed on many aquatic species that they capture with their front paws, a habit that probably led early observers to think the animals were washing food.

Become a NWF Wildlife Gardener. It's free and you will receive great gardening tips and learn how to certify your yard as a Certified Wildlife Habitat® site.  During May, NWF will plant a tree for each yard certified during Garden for Wildlife Month.