Sharks and Wolves: Separated at Birth?

Top predators in very different ecosystems can have similar effects on their habitat, prey and other species 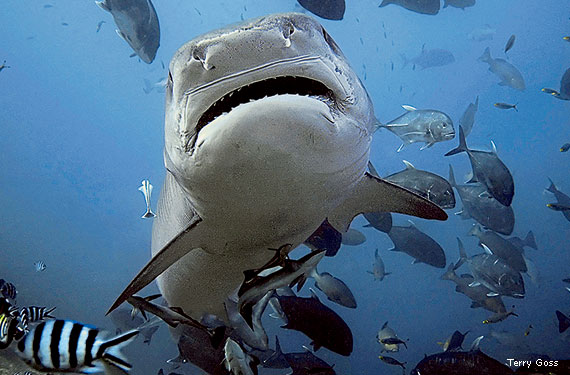 GRAY WOLVES AND TIGER SHARKS (above) may seem to have little in common, but new research comparing the predatory behavior of U.S. wolves with that of Australian sharks is showing that the two species are remarkably similar in how they function in their respective habitats.

Scientists from Oregon State University (OSU) and the University of Washington reported recently in Frontiers in Ecology and the Environment that these predators not only help control prey populations but also alter prey behavior through the “ecology of fear,” a term biologists are applying to the way predation affects how prey species use habitat.

“For too long we’ve looked at ecosystem functions on land and in the oceans as if they were completely separate,” says William Ripple, a professor in the OSU Department of Forest Ecosystems and Society. “We’re now finding that there are many more similarities between marine and terrestrial ecosystems than we’ve realized.”

Ripple and collaborator Aaron Wirsing from the University of Washington’s School of Environmental and Forest Sciences compared the interactions of wolves and elk in Yellowstone National Park with those of tiger sharks and dugongs in Shark Bay, Australia. Wolves (right) were wiped out in the park during the 1920s, allowing elk numbers to rise and letting the animals move into areas they would have avoided if wolves were present. These changes led to a decline in some plant species on which elk feed: aspens on some mountainsides and willows along streams. Reintroduction of wolves in 1995 and 1996 has reduced elk numbers and forced the animals to alter their use of feeding areas, staying in habitat that gives them room for escape. In some regions of the park, aspen and willows are starting to recover, yielding positive impacts on other wildlife as well, including songbirds and beavers.

Similar effects take place between Australian tiger sharks and dugongs, the researchers found. Dugongs are large marine mammals, similar to manatees, that can exceed 1,500 pounds and that feed primarily on seagrasses. When sharks are abundant, dugongs graze less in shallow water, where seagrass grows thickest but where dugongs are most vulnerable to sharks. The dugongs’ shift to feeding in deeper waters allows seagrass meadows to thrive, along with a range of other plants and animals that depend on the vegetation. Ripple says scientists have observed a similar interaction in the North Atlantic, where overfishing caused a drop in sharks, allowing prey species such as cownosed rays to expand and feed more heavily on their prey, leading to a collapse in commercially important bay scallops.

Understanding the similarities of predator ecology in marine and terrestrial environments gives scientists a better grasp of the general behaviors that underlie the interplay of predator and prey. “We need to better understand these commonalities and, from them, learn how interactions on land may be a predictor of what we will see in the oceans, and vice versa,” Ripple says.