The Buzz About Bumblebees

Across North America and beyond, bumblebees are in trouble, but gardeners can help these critical pollinators 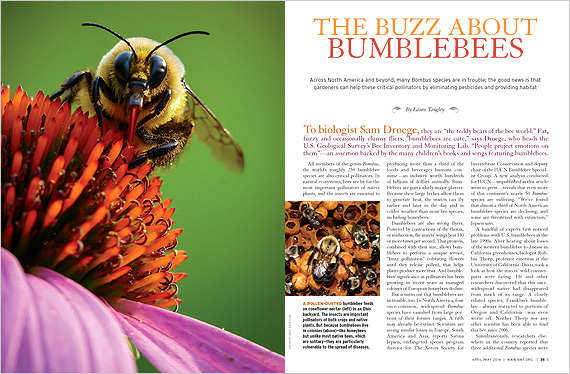 TO BIOLOGIST SAM DROEGE, they are “the teddy bears of the bee world.” Fat, fuzzy and occasionally clumsy fliers, “bumblebees are cute,” says Droege, who heads the U.S. Geological Survey’s Bee Inventory and Monitoring Lab. “People project emotions on them”—an assertion backed by the many children’s books and songs featuring bumblebees.

All members of the genus Bombus, the world’s roughly 250 bumblebee species are critical pollinators. In natural ecosystems, bees are by far the most important pollinators of native plants, and the insects are essential to producing more than a third of the foods and beverages humans consume—an industry worth hundreds of billions of dollars annually. Bumblebees are particularly major players: Because their large bodies allow them to generate heat, the insects can fly earlier and later in the day and in colder weather than most bee species, including honeybees.

Bumblebees are also strong flyers. Powered by contractions of the thorax, or midsection, the insects’ wings beat 130 or more times per second. That prowess, combined with their size, allows bumblebees to perform a unique service, “buzz pollination” (vibrating flowers until they release pollen), that helps plants produce more fruit. And bumblebees’ significance as pollinators has been growing in recent years as managed colonies of European honeybees decline. 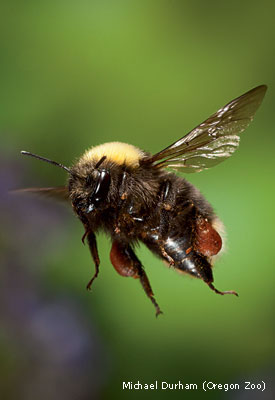 But it turns out that bumblebees are in trouble, too. In North America, four once-common, widespread Bombus species have vanished from large portions of their former ranges. A fifth may already be extinct. Scientists are seeing similar losses in Europe, South America and Asia, reports Sarina Jepsen, endangered species program director for The Xerces Society for Invertebrate Conservation and deputy chair of the IUCN Bumblebee Specialist Group. A new analysis conducted for IUCN—unpublished as this article went to press—reveals that even more of this continent’s nearly 50 Bombus species are suffering. “We’ve found that almost a third of North American bumblebee species are declining, and some are threatened with extinction,” Jepsen says.

A handful of experts first noticed problems with U.S. bumblebees in the late 1990s. After hearing about losses of the western bumblebee (right) to disease in California greenhouses, biologist Robbin Thorp, professor emeritus at the University of California–Davis, took a look at how the insects’ wild counterparts were faring. He and other researchers discovered that this once-widespread native had disappeared from much of its range. A closely related species, Franklin’s bumblebee—always restricted to portions of Oregon and California—was even worse off. Neither Thorp nor any other scientist has been able to find this bee since 2006.

Simultaneously, researchers elsewhere in the country reported that three additional Bombus species were missing from regions where they once were common. Because these losses seemed sudden—and because most declining species are closely related, unlike others in the same habitats that appeared fine—“the evidence in these cases pointed to disease as the culprit,” Thorp says.

Specifically, Thorp believes that when bumblebee queens were shipped to Europe in the early 1990s to generate colonies for crop pollination in the United States, the colonies brought back a nonnative parasitic fungus that wiped out wild relatives with no prior exposure to the pathogen. So far his hypothesis has been supported by experimental evidence.

In 1994, the U.S. Department of Agriculture (USDA) suspended bumblebee shipments between Europe and the United States, yet scientists remain concerned about the domestic Bombus trade—an industry that has grown exponentially during the past two decades as demand for bumblebee-pollinated berries, tree fruits, peppers and, especially, hothouse tomatoes has skyrocketed. Unregulated by the federal government, commercial bumblebee producers routinely transport insects to parts of the country where they are not native. Even in cases where bees are intended for use only in greenhouses, nonnatives escape, potentially outcompeting indigenous bumblebees and threatening them with a host of novel parasites and other pathogens.

Four years ago, a coalition of scientists and conservation groups, including Thorp and The Xerces Society, petitioned USDA to begin regulating the bumblebee trade. Specifically, they’re asking the department to prohibit transfer of bumblebees outside their native ranges and to establish a system for certifying that bee shipments are disease-free. So far, USDA has not acted on the petition.

Bumblebees face many other threats, including habitat loss, pesticides, climate change and, outside Europe, competition from nonnative honeybees. Of particular concern to many conservationists is a new class of popular insecticides, the neonicotinoids, that are long lasting and absorbed by the vascular systems of plants, meaning bees are exposed to the poisons through nectar and pollen. Beyond killing the insects, “a rapidly growing body of research shows that these compounds have sublethal effects on bumblebees, ranging from decreased colony production to diminished foraging success,” Jepsen says.

Some activists have asked the U.S. Environmental Protection Agency to ban neonicotinoids—a ban in place already in Europe—which are widely used both on crops and ornamental plants. Scientists such as Droege are not convinced. “If we get rid of the neonics, farmers will turn to other insecticides that could be worse,” he says. Another potential problem with pesticide bans: “The less food we produce per acre, the more land gets plowed under,” Droege adds, “and habitat loss is a big problem for bees.”

Yet Droege and other scientists and conservationists agree that neonicotinoids should be avoided for “cosmetic” purposes—cases where food crops and human health are not at risk. Moreover, “they should not be used on plants that are particularly attractive to bumblebees,” Jepsen says. A particularly egregious example of such misuse occurred last June, when contractors at a shopping center in Wilsonville, Oregon, sprayed the neonicotinoid dinotefuran on bumblebee-laden linden trees around a parking lot. The incident killed an estimated 50,000 of the insects, the largest single bumblebee die-off ever recorded. 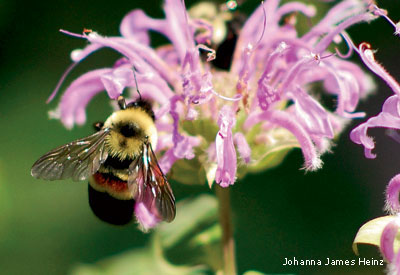 Fortunately, the news about bumblebees is not all bad. Last summer, insect hunters in Washington and Oregon spotted and photographed several western bumblebees in locations where they had vanished. To Thorp, the news suggests that some bees carrying genes that provide resistance to the nonnative fungus may have survived and passed that tolerance along to their progeny. In eastern North America, participants in a Xerces Society citizen science program have reported a handful of rusty-patched bumblebees (left) in habitats thought to have lost this severely depleted species.

The most encouraging news of all, perhaps, is the extent to which such citizen scientists, along with gardeners and other nonbiologists, can help bumblebees. “From the products you buy in the hardware store or nursery to how you plant and manage your property, nearly anyone can contribute to conserving these indispensable pollinators,” Jepsen says.

To learn more about the problems bumblebees are facing and how to help the insects, go to www.xerces.org/bumblebees.

How to Garden for Bumblebees

Bumblebees face many threats, ranging from pesticides and disease to overgrazing, climate change and competition from European honeybees. While individuals can do little to combat many of these problems, anyone with a garden—no matter how large or small—can make a difference for bumblebees that live nearby.

Here’s how to get started:

Provide pollen and nectar for food: Active from early spring through late fall, bumblebees need access to a variety of nectar- and pollen-producing flowers so food will be available throughout all stages of the insects’ life. Bumblebees prefer flowers that are purple, blue or yellow as well as perennial versus annual plants. To accommodate species with varying tongue lengths, cultivate flowers of different sizes. Native plants are best because they require less maintenance, rarely become invasive and have coevolved with indigenous bumblebees. To see a list of native plant recommendations for your region, go to www.xerces.org/lbj.

Ensure bumblebees have nesting sites: Unlike the majority of native bees, bumblebees, like honeybees, are social insects that live in colonies containing between 50 and 500 members. Most bumblebee species nest underground, usually in abandoned holes created by ground squirrels, mice or rats. Others nest aboveground in abandoned bird nests, grass tussocks or cavities such as hollow logs or spaces beneath rocks. In gardens, the insects make use of compost piles and unoccupied birdhouses. Having as many of these habitat features as possible will help bumblebees, as will minimizing practices such as mowing and tilling that destroy both nests and potential future nest sites.

Provide overwintering habitat: In late fall, bumblebee colonies die, leaving behind only new queens, which will hibernate during winter and emerge the following spring to form new colonies. Most queens overwinter in small holes just below or on the ground’s surface. In yards and other human-dominated landscapes, they may seek shelter in sheds, rock walls and woodpiles. Leaving leaf litter, downed wood and uncut bunch grasses provides additional options. If you mow, do so with the mower blade set at the highest safe level. When spring arrives, avoid raking or mowing until April or May to protect hibernating queens. 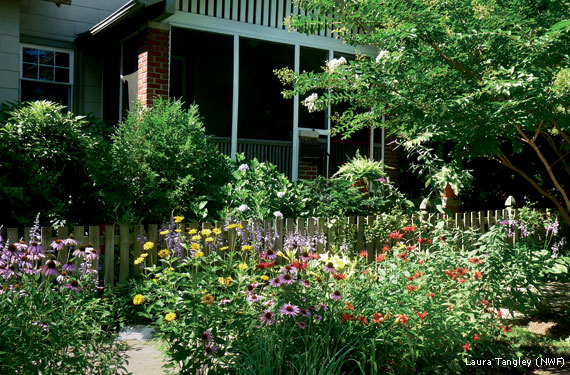 Avoid or minimize pesticides: Designed to kill insects, insecticides should be avoided, as should herbicides that may kill the plants on which bumblebees depend. In cases where pesticides cannot be avoided—to control a destructive invasive species, for example—The Xerces Society recommends that you “choose targeted formulations with the least-toxic ingredients, follow the manufacturer’s directions, apply the pesticide as directly and locally as possible and apply when bumblebees are not active (either after dark or during winter).” In addition, steer clear of systemic pesticides (such as neonicotinoids, which are taken up by the vascular systems of plants) and broad-spectrum pesticides (such as organophosphates and pyrethroids).

Become an NWF Wildlife Gardener. It's free and you will receive great gardening tips and learn how to certify your yard as a Certified Wildlife Habitat® site or your community as part of NWF's Community Wildlife Habitat® program.