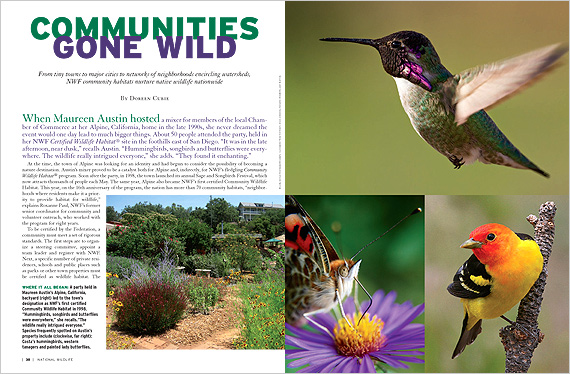 WHEN MAUREEN AUSTIN HOSTED A MIXER for members of the local Chamber of Commerce at her Alpine, California, home in the late 1990s, she never dreamed the event would one day lead to much bigger things. About 50 people attended the party, held in her NWF Certified Wildlife Habitat® site in the foothills east of San Diego. “It was in the late afternoon, near dusk,” recalls Austin. “Hummingbirds, songbirds and butterflies were everywhere. The wildlife really intrigued everyone,” she adds. “They found it enchanting.”

At the time, the town of Alpine was looking for an identity and had begun to consider the possibility of becoming a nature destination. Austin’s mixer proved to be a catalyst both for Alpine and, indirectly, for NWF’s fledgling Community Wildlife Habitat® program. Soon after the party, in 1998, the town launched its annual Sage and Songbirds Festival, which now attracts thousands of people each May. The same year, Alpine also became NWF’s first certified Community Wildlife Habitat. This year, on the 16th anniversary of the program, the nation has more than 70 community habitats, “neighborhoods where residents make it a priority to provide habitat for wildlife,” explains Roxanne Paul, NWF’s former senior coordinator for community and volunteer outreach, who worked with the program for eight years.

To be certified by the Federation, a community must meet a set of rigorous standards. The first steps are to organize a steering committee, appoint a team leader and register with NWF. Next, a specific number of private residences, schools and public places such as parks or other town properties must be certified as wildlife habitat. The number depends on a community’s population. Neighborhoods also must complete other projects such as creating and distributing native plant lists for their areas, removing invasive plants from public sites, developing demonstration gardens or partnering with nearby parks to establish wildlife-friendly landscapes. The number of projects, again, is dictated by population. “Through these on-the-ground volunteer efforts, individuals come together and make a big difference for wildlife in their communities, both now and in the future,” says Eliza Russell, NWF’s director of education. 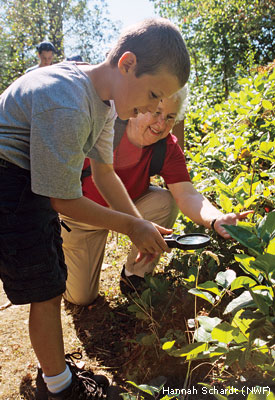 Certified communities come in all sizes. Some, such as Austin, Texas, are large cities. Others, such as Ajo, Arizona, are small towns. Located deep in the heart of the Sonoran Desert, Ajo has a permanent population of just 3,500 people. “It was a challenge,” says team leader Vivian Sartori. One complication: Ajo is a “snowbird” community hosting many part-time residents, which made getting some people to certify their yards more difficult. It also is surrounded by federal land. But Sartori and her team persevered. Ultimately, the community certified 57 homes, one school, one local park, the historical museum’s grounds, several community gardens, Organ Pipe Cactus National Monument’s visitor center and the Cabeza Prieta National Wildlife Refuge headquarters. Five and a half years after it began the process, Ajo crossed the finish line in early 2013. “We were so excited,” Sartori says. “It took me awhile to come back down to earth.” Her community now provides important habitat for a variety of desert wildlife ranging from Gambel’s quail to javelina to coyotes.

Today a total of 24 states host certified communities. Washington has the most with 15, followed by Florida, which has nine. Four counties also have joined the program: Arlington and Fairfax in Virginia, Broward in Florida and Sonoma in California. And there’s even one lake: North Carolina’s Lake Norman, where the eight communities surrounding the lake were certified in 2011.

“Lake Norman is a man-made lake with 520 miles of shoreline,” says team leader Don West, president of Lake Norman Wildlife Conservationists, the local chapter of NWF state affiliate North Carolina Wildlife Federation that spearheaded the certification process. About 200,000 people live around the lake, which is just north of Charlotte.

Because the lakeshore is heavily developed, West’s group has focused on replacing lost wildlife habitat. One recent endeavor involved putting up nesting platforms for great blue herons and ospreys. “Birds have always nested on an island in Lake Norman,” he explains, but most of its trees had fallen down, and other nesting options were in short supply. In another project, volunteers created deep-water reefs for striped and hybrid bass, and “they’re now teeming with fish,” West says. Participants also planted more than 1,000 native buttonbushes along the lake to stabilize its shoreline and provide food for wildlife.

Promoting native plants is an important component of all community habitats. In Chesterfield, Missouri, certified in 2005, the Citizens Committee for the Environment provided families, businesses and others with hundreds of native trees, woody shrubs, wildflowers and grasses at 12 educational events it hosted. The group also has reestablished a native tallgrass prairie.

Twenty-five miles west of St. Louis, Chesterfield, with its rolling hills and tree-lined neighborhoods, is a likely choice for a community habitat. But NWF has certified several less-obvious candidates, including Bethlehem, Pennsylvania. Once highly industrialized—the former home of Bethlehem Steel Corporation—this city of 75,000 inhabitants recently launched an ambitious recycling program, and residents are also building a greenway. Bethlehem Backyards for Wildlife registered with NWF in 2009, and three years later the city was certified.

Because Bethlehem has abundant row houses with little space for landscaping, “one of our focuses is very small backyards,” says team leader and elementary school teacher Martha Christine. “We wanted to emphasize that you don’t need a lot of space to garden for wildlife.” Small yards are particularly good for helping small species, she adds. “We tried to educate people about pollinators, especially monarchs and other butterflies.” 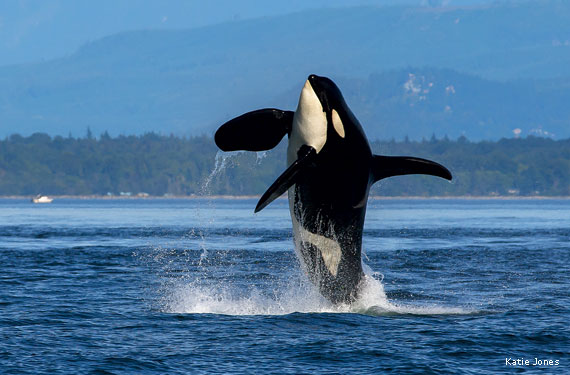 Another priority for certified communities is addressing specific needs such as conserving water or reducing or eliminating chemical fertilizers. By reducing fertilizers, neighborhoods keep excessive nitrogen runoff—a major source of nonpoint pollution—from flowing into nearby watersheds. One place this is especially important is Washington’s Puget Sound, which stretches for 100 miles north from the city of Olympia past Seattle to the Pacific Ocean. In addition to being home to orcas (above), salmon and shorebirds, the sound hosts 15 certified and 11 registered communities. Most are working to help protect Puget Sound.

One community is Fidalgo Island and its main town of Anacortes, located about 80 miles north of Seattle. Though most of the island is rural and forested, it also has many lakes and wetlands. In one project, the community habitat team is helping restore a stream called Ace of Hearts, a waterway that rises in the island’s interior, winds through Anacortes and, ultimately, into Puget Sound. Though most of the stream is channeled into a series of ditches and culverts where it passes through town, the local government recently returned a two-block-long section to a more natural flow. Since then, Anacortes’ habitat team has further improved a block-long section of the stream, putting in native plants and streamside grasses with help from property owners and local fourth-grade students.

Florida’s Broward County, home to Fort Lauderdale and about 1.8 million people, is another certified community focusing on fragile watersheds. In this case, they stretch “from sawgrass to seagrass,” or from the Everglades to the Atlantic Ocean. “We have 22 miles of shoreline with coral reefs offshore,” says team leader Diana Guidry, who runs a county program called NatureScape Broward. “Two-thirds of our county is protected land. The rest is mostly built out.” To tackle that challenge, Guidry promotes Florida-friendly landscapes, which not only create wildlife habitat but also conserve water and reduce pollution. Nonpoint source pollution is one of the county’s biggest problems. “We are trying to prevent polluted runoff both to the ocean and to the Everglades,” she says.

Guidry oversees her certified community as part of her job with Broward County. But most team leaders are volunteers, including Malcolm Barnard (watch video below), who was still a middle school student in 2010 when he decided his town of Johns Creek, Georgia, should become an NWF community habitat. Johns Creek is a suburb of Atlanta, and since 35 percent of its population is younger than 19, it was fitting that a teenager took charge. Barnard, who has “always been interested in nature,” first learned about the program while working on a school project. Later he approached the Johns Creek government and convinced them the town should participate. His team had six other people, all adults. They got the town certified in 2012.

Barnard, who is now in the 12th grade and hopes to become a biologist, says he is passionate about environmental education for future leaders. Because of this, he worked to get all 18 public schools in Johns Creek certified through NWF’s Schoolyard Habitats® program. “Every certification, whether it is a school or a single backyard or a community, lays down a brick in the foundation of a better tomorrow,” Barnard says. “If every community started something, think how we could change the planet.”

The Federation has set its sights on surrounding the Chesapeake Bay with certified Community Wildlife Habitats. One community, Maryland’s capital city Annapolis, completed its certification in August 2013, and Centerville, Maryland, was certified a month later. In early 2013, the city of Baltimore registered with NWF and is now working toward certification and a healthier Chesapeake. To learn more about the city’s efforts, visit www.nwf.org/Baltimore.

Frequent contributor Doreen Cubie is based in South Carolina.