As more birds alter their ranges to cope with a warming climate, you can take steps in your yard to help the animals survive 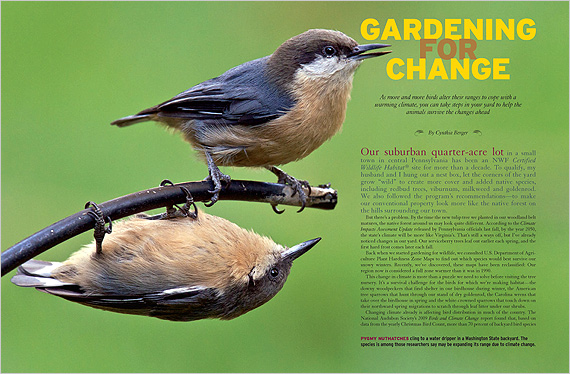 OUR SUBURBAN QUARTER-ACRE LOT in a small town in central Pennsylvania has been an NWF Certified Wildlife Habitat® site for more than a decade. To qualify, my husband and I hung out a nest box, let the corners of the yard grow “wild” to create more cover and added native species, including redbud trees, viburnum, milkweed and goldenrod. We also followed the program’s recommendations—to make our conventional property look more like the native forest on the hills surrounding our town.

But there’s a problem. By the time the new tulip tree we planted in our woodland belt matures, the native forest around us may look quite different. According to the Climate Impacts Assessment Update released by Pennsylvania officials last fall, by the year 2050, the state’s climate will be more like Virginia’s. That’s still a ways off, but I’ve already noticed changes in our yard. Our serviceberry trees leaf out earlier each spring, and the first hard frost comes later each fall.

Back when we started gardening for wildlife, we consulted U.S. Department of Agriculture Plant Hardiness Zone Maps to find out which species would best survive our snowy winters. Recently, we’ve discovered, these maps have been reclassified: Our region now is considered a full zone warmer than it was in 1990. 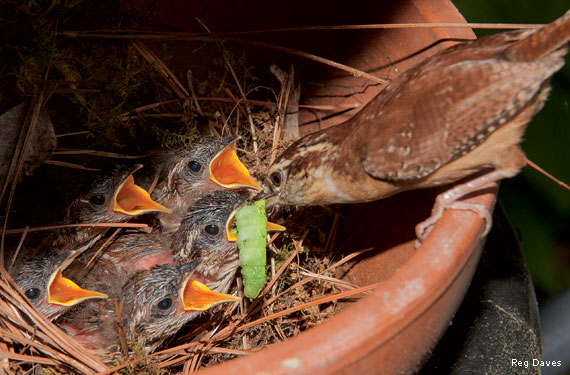 This change in climate is more than a puzzle we need to solve before visiting the tree nursery. It’s a survival challenge for the birds for which we’re making habitat—the downy woodpeckers that find shelter in our birdhouse during winter, the American tree sparrows that hunt through our stand of dry goldenrod, the Carolina wrens (above) that take over the birdhouse in spring and the white-crowned sparrows that touch down on their northward spring migrations to scratch through leaf litter under our shrubs.

Changing climate already is affecting bird distribution in much of the country. The National Audubon Society’s 2009 Birds and Climate Change report found that, based on data from the yearly Christmas Bird Count, more than 70 percent of backyard bird species have shifted their ranges north during the past four decades. The average range shift is about 35 miles, but the change is not uniform. During cold months, some species are now observed more than 100 miles north of their former winter ranges, including backyard regulars such as the American goldfinch, pine siskin, boreal chickadee and pygmy nuthatch.

“It’s not as simple as whole bird communities moving north or moving up a mountain slope with climate change,” says John Alexander, executive director of the Klamath Bird Observatory in Oregon. “There’s going to be a shuffle. You’ll start to see new groupings of species. Birds that never used to be part of the same community will start to coexist and interact.” This means some birds will face new competition for resources. Others will be threatened by new predators.

Experts can’t predict with certainty which plants will thrive in our yards in the future or which birds will be there to benefit from what we plant. But we can take steps to prepare our land for future changes. “You can be ‘climate ready’ for whatever shows up,” says Tom Gardali, a California biologist who leads riparian restoration projects for Point Blue Conservation Science. Gardali already has made changes to the way his teams conduct their stream bank restoration work. “We’re choosing a mix of species based on what the climate might do rather than what it is right now,” he says. “We’re intentionally planting for climate change.”

Because warming is expected to bring dryer conditions to coastal central California, Gardali’s teams have redesigned their planting schemes to include varieties that can rebound after a drought as well as species that are more fire-resistant. “That may not be what you might expect in moist riparian habitat,” he says. “But it’s a kind of ‘ecological insurance policy’—safe, low-risk and something you can actually do.”

Gardali believes you can apply the same principles behind his riparian work to backyard habitats. “You may not know whether it will be wetter or dryer in your location, or whether it will warm a little or a lot,” he says. “But if you plant a diversity of species, your yard can handle whatever comes.” The backyard habitat guidelines published by NWF already recommend planting a variety of native species. “However, see if you can do even more,” Gardali urges, noting that because of warming, we may increasingly see mismatches in timing between when migratory birds arrive at their breeding grounds and the important food sources that are waiting for them. 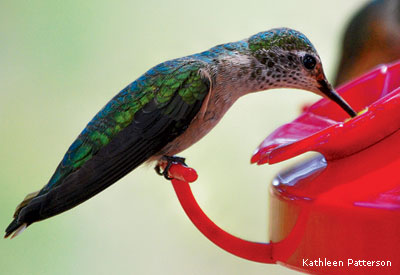 Case in point: broad-tailed hummingbirds (left), popular backyard visitors in some regions that overwinter in Central America, then migrate north to breed in the western United States. Their natural habitat in this country includes mountain meadows, where glacier lilies start to bloom about two weeks after males set up territories—right on time to sustain new hummingbird families. With the warming climate, however, University of Maryland researchers David Inouye and Amy McKinney have found that glacier lilies now bloom about 17 days earlier in the birds’ high-mountain breeding areas than they did in the 1970s. If this warming trend continues, the hummingbirds may show up one spring to find the lilies are done blooming—and a key food source is gone.

To temper the impact of such mismatches, Gardali says, try to extend the time period over which your property offers resources. “Look at your yard and ask yourself, ‘In any given month, which plants are flowering? Which plants are fruiting? Which are seeding?’” he says. “Then ask, ‘Can I add species so there’s food and cover in every month of the year?”

Doug Tallamy agrees. “Put more plants in your landscape, but also put in higher-quality plants,” says the University of Delaware entomologist and author of Bringing Nature Home: How You Can Sustain Wildlife with Native Plants. Though many birds include fruits or seeds in their diet, caterpillars are by far the food most birds feed their young. “They’re high in protein and easily available” he says.

Tallamy currently is collecting data on which plants support which insects—research that can frame recommendations for backyard plantings. “For example, don’t plant a ginko,” he says. “About three species of caterpillars will feed on it. If you live in the Northeast, put an oak in your yard instead and you can support more than 550 caterpillar species!”

Are similar recommendations available for other regions of the country? Right now, unfortunately, there’s no handy guide to the backyard plants that will grow the most caterpillars. But Naomi Edelson, NWF’s director of state and federal wildlife partnerships, notes that Tallamy, NWF and the U.S. Forest Service are working on it. Look for a set of state-by-state lists of caterpillar-friendly plants to be published this fall.

Edelson notes that many other longstanding backyard wildlife habitat recommendations will become even more important in the face of pending climate change. “In much of the country,” she says, “we expect hotter days and more frequent and longer periods of drought, so providing even small amounts of water is essential.” By putting a pond, birdbath or other water feature in your yard, she adds, “you can provide not only a place for birds to drink and bathe but also a home for dragonflies and even salamanders if you create a simple vernal pool.”

A water feature also can play role in helping homeowners provide thermal refugia, or safe refuge for wildlife trying to cope with climate change. “In some regions, having shaded and cool areas in a yard is going to be super important for birds and other creatures,” says Gardali, “and it’s a simple thing gardeners can create.”

Another recommendation: Leave leaf litter in place in a yard. Tallamy’s research finds that catbirds and thrushes go after the crickets, centipedes, cutworms and earthworms that flourish in decaying leaves. Edelson has seen the advantages of this practice firsthand. “In my Maryland backyard,” she says, “I never rake under the trees that support my son’s tree house. Leaving plant litter is better than having a bird feeder; it’s a natural bird feeder.” 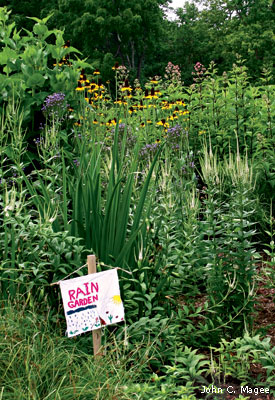 NWF certified habitat sites offer birds and other creatures food, cover, water and nest sites, but they also can help address another problem that is intensifying with climate change: heavier rains and more intense storms, especially in the Mid-Atlantic and Northeast. Converting a portion of your property to a so-called rain garden, filled with water-absorbing native plants will provide a boon to wildlife. It also will help reduce flooding in urban and suburban areas that result when hard surfaces such as roads, sidewalks and expanses of roof replace open land. “A rain garden returns porousness to the land,” Edelson says, keeping water in place so it soaks in slowly and recharges groundwater instead of running off in sheets. Edelson admits that a single rain garden has only a small impact on the surrounding environment. “But if you become an ambassador for such solutions,” she says, “you can encourage your neighbors to work together on projects.”

“Even if you‘re already doing all of these things in your backyard, you can still take it to another level,” says Carolyn Enquist. “You’re probably already making plant and wildlife observations in your yard. Why not do it systematically and contribute your data to a citizen-science project?”

“Researchers do need mountains of data to make sense of global climate change,” agrees Tallamy. He’s recruiting citizen scientists to help grow his database of observations of what birds eat by taking photos of the animals bringing insects to their young.“We’re trying to get to 10,000 images this year,” he says. When it was released, the 2010 State of the Birds report—issued by a coalition of U.S. government agencies and nongovernmental organizations—projected that climate change will have a negative impact on birds in all habitats. The 2013 State of the Birds report identifies the importance of private land in bird conservation. My property—and yours—can help make a difference.

“Most wildlife experts had written off the urban landscape and focused efforts on unspoiled landscapes,” says Edelson. “But particularly in an era of climate change, we can restore and reclaim this huge acreage and make it more viable and productive for wildlife—especially for birds.” 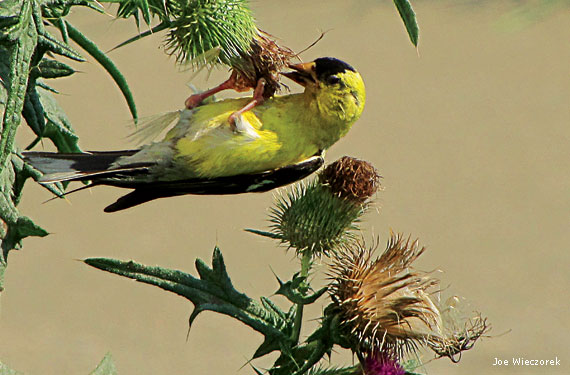 Now in its 41st year, NWF’s Certified Wildlife Habitat® program provides all of the information you need about native plants and natural gardening techniques to provide birds and other wildlife with safe havens around your property in the face of global warming. To learn more and find out how you can certify your yard, see the insert in the middle of this issue or visit www.nwf.org/nwfgarden.

The Federation also is working with conservation partners around the country to help wildlife managers and city planners become “climate smart” by anticipating climate change impacts and developing proactive tactics that can help make habitats and communities more resilient to a warming planet. “Climate adaptation increasingly will define 21st-century conservation, which is why NWF has made it a major focus of its current efforts,” says Bruce Stein, director of the Federation’s Climate Change Adaptation program.

Writer Cynthia Berger and her husband have maintained NWF certified habitat #34415 at their Pennsylvania property since 2002.