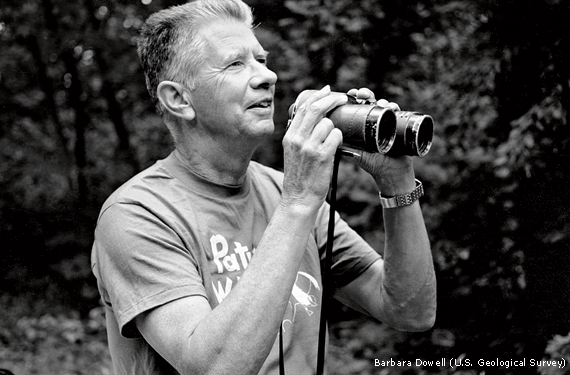 IN THE EARLY 1960s, CHANDLER ROBBINS, a young U.S. Fish and Wildlife Service biologist, received a handwritten note from a midwestern birder who had noticed a recent scarcity of American robins around her home. Concerned that expanding use of DDT could be taking a toll on the birds, “she wanted to know if this was a local phenomenon or part of a national trend,” Robbins recalls. “I couldn’t answer her question because we had no scientifically credible, large-scale monitoring programs for nongame birds in this country.”

Where Had All the Robins Gone?

Robbins’ inability to answer a simple question about such a familiar North American bird bothered him for months. Finally, the scientist decided it was up to him to create a continental bird-monitoring effort himself.

Because few professional ornithologists worked for federal or state governments, “I started thinking about enlisting skilled amateurs,” Robbins says. He ruled out setting up permanent plots for the project because the effort to monitor them would take more time than volunteers would have. His solution: Establish a large network of roadside routes—each including a representative sample of the region’s habitats—and ask birders to drive these routes just one day a year during the height of the breeding season. Every half mile, observers would stop, get out of their cars and record all species seen or heard for three minutes. Repeated annually by the same set of seasoned birders, the scheme had potential not only to yield valuable population trend data, “it also could turn out to be fun,” Robbins reasoned.

After a 1965 field test along 60 routes in Delaware and Maryland, the North American Breeding Bird Survey (BBS) officially launched in summer 1966, with birders covering 600 U.S. and Canadian routes east of the Mississippi River. According to BBS National Coordinator Keith Pardieck, this summer some 2,000 birders drove more than 3,000 routes across the United States, Canada and northern Mexico collecting data on more than 600 species. The number of routes is still growing, primarily in Mexico, adds Pardieck, a biologist for the U.S. Geological Survey (USGS, which now manages the U.S. portion of the survey) in Laurel, Maryland.

"Today the BBS is the best long-term monitoring program for bird populations anywhere in the world,” says Peter Marra, head of the Smithsonian Migratory Bird Center in Washington, D.C. Survey data have provided the scientific basis for countless conservation and management decisions and helped set research priorities for decades. “It’s amazing that Chan had the insight and the wisdom to start such a massive effort so many years ago,” Marra adds.

The biggest change during the past five decades has been improvement in how BBS data are analyzed and made available. Two decades into the program, “we had to dig through foot-high piles of paper in the basement to find what we were looking for,” recalls Sam Droege, a USGS biologist who coordinated the survey for several years during the 1980s. Because desktop computers were not powerful enough to analyze the data, staff had to rent time on room-sized, mainframe computers at the National Institutes of Health. By the early-1990s, personal computers had become fast enough to handle the data, and today all BBS results are available free of charge on the program’s website. “Users can run their own analyses and easily see changes in species distribution or abundance that might warrant conservation action,” Droege says.

Trouble in the Tropics—and at Home

One of the earliest and most influential trends to emerge was the discovery that dozens of bird species that breed in eastern U.S. forests and winter in Latin America had declined steeply between the mid-1970s and mid-1980s. Reported in a 1989 Proceedings of the National Academy of Sciences paper by Robbins, Droege and their colleagues, the finding “really fired up the conservation community,” Pardieck says. Specifically, the results focused conservationists’ attention on the problem of tropical deforestation in the Americas and led to many new initiatives during the following decade, including the creation in 1990 of Partners in Flight, an ongoing international collaboration among governments, foundations, universities, conservation groups and others to protect Neotropical migratory birds.

More recently, BBS data have revealed declines in other groups of birds, including grassland species (see maps below) and aerial insectivores such as swifts, swallows and nighthawks. After West Nile virus was detected in New York in 1999—with tens of thousands of dead birds eventually testing positive for the virus—Marra analyzed 26 years of BBS data on 20 bird species to determine whether the disease had decreased their numbers beyond what would be expected through natural variation. In 2007 he reported in Nature that populations of seven species—including the house wren, eastern bluebird, tufted titmouse, chickadee and, especially, American crow—had indeed declined significantly.

As the fortunes of the continent’s birds wax and wane, and as the BBS grows and generates ever-more-sophisticated data, one thing has remained virtually unchanged: the survey methodology that Robbins designed a half century ago. BBS data are considered scientifically reliable because Robbins ensured that sampling strategies, from weather conditions to the birders themselves, remained standard from year to year. “One key to the lasting legacy of the survey was Chan’s foresight in minimizing ‘noise’ during the counting process,” Pardieck says.
A Tale of Two Species

Rather than total population numbers, North American Breeding Bird Survey (BBS) data reveal changes in relative abundance and distribution of species over time. Though few species show consistent long-term increases or decreases rangewide, there are notable exceptions—including those shown on the maps below, where blue reflects population gain and red reflects loss. 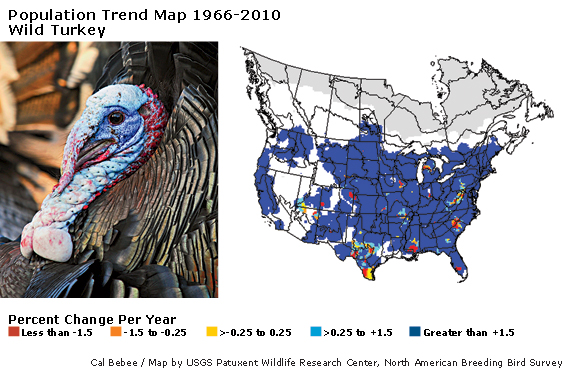 Aided by regrowth of forests cleared for agriculture, along with reintroductions to its former habitat, the once-imperiled wild turkey has been gaining ground throughout most of its range since the mid-1960s. 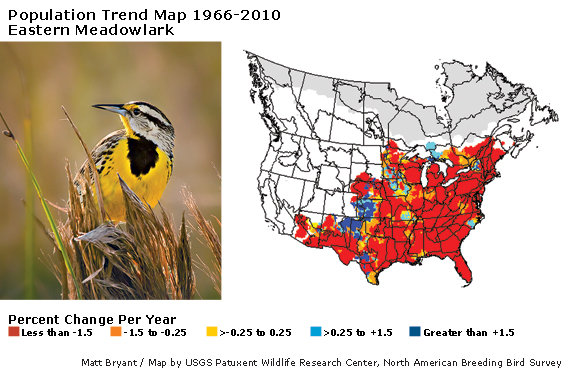 By contrast, the grassland-dwelling eastern meadowlark has been declining virtually everywhere it is found during the same period. As grassland and other open habitats are lost across the continent, BBS data are revealing similar downward trends for additional species that rely on these landscapes, including the bobolink, northern bobwhite, horned lark and field sparrow.