Dolphin Tale 2: An Inspiring Tale of a Tail

The only dolphin fitted with a prosthetic tail fluke is not only an acclaimed movie star but an inspiration to humans. 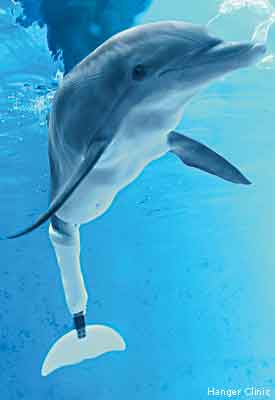 FOUND SEVERELY INJURED by a fisherman after she became tangled in a crab-trap rope off the east coast of Florida in December 2005, a 3-month-old female bottlenose dolphin was rushed by authorities to the Clearwater Marine Aquarium. The facility rescues, rehabilitates and, when possible, releases marine animals back to the wild.

Though the staff worked around the clock to save the dolphin, which they named Winter, they could not repair her badly damaged tail fluke. Without it, she could not swim properly and ultimately would died. But Kevin Carroll was not about to let that happen.

A vice president for the Hanger Orthopedic Group in Florida, a leading provider of prosthetics and orthotics, Carroll first heard about Winter on the radio. “We can help her,” he remembers thinking as he got in touch with the aquarium. He also contacted a colleague, Dan Strzempka, a licensed prosthetist and an amputee himself.

Together, the two men fabricated the world’s first artificial tail for a dolphin and, with help from a veterinarian, mounted it on the animal. “A lot of people thought we were crazy,” Carroll says. “But I thought why shouldn’t we put a tail on a dolphin?” Winter adapted well to wearing her prosthetic and the rest, as the saying goes, is show business.

Dolphin Tale, an account of Winter’s story, was released in 2011 and immediately became a box-office success. Today more than 750,000 people visit the Clearwater, Florida, rehabilitation facility annually to see her, and this September a sequel to the original movie entitled Dolphin Tale 2 from Alcon Entertainment and Warner Bros. Pictures will open in theaters nationwide.

Hope, a rescued young orphaned dolphin that could not survive in the wild and now lives at the aquarium, is featured in the sequel. But Winter remains the big attraction at the Clearwater aquarium. “She’s an inspiration, especially for kids,” says Strzempka, a Florida native who lost his leg in a lawnmower accident at the age of 4 and has devoted his career to helping other amputees. “Seeing her can be life changing.” Sometimes children refuse to wear their prosthetic devices, he explains. “But we’ve found that after seeing Winter, many kids are inspired by her story and start to wear their prosthetics.”

While working with the injured animal, Strzempka and Carroll (below) developed a product called WintersGel, a liner that protects her skin from the prosthetic tail. The gel is now used widely by human amputees. The two prosthetists also continue to volunteer their time to help Winter, fabricating a new tail for the growing dolphin every six months or so. “I love watching her and her prosthetic tail going through the water,” says Carroll. “It’s just a beautiful sight.” 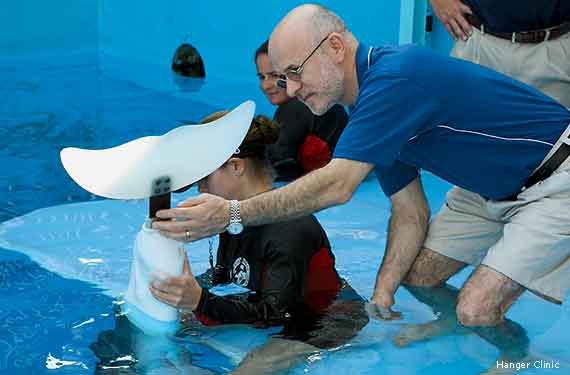 Education Partner: Celebrating Dolphins
NWF is teaming up with Dolphin Tale 2 in theaters nationwide this September. As an official education partner for the movie, the Federation is providing a variety of educational resources to help kids, parents and teachers learn more about the amazing abilities of dolphins and the threats they currently face in areas such as the Gulf of Mexico, where the marine mammals are still suffering from the effects of the 2010 oil disaster.

Watch a video of Winter and the scientists who helped her.
Help protect wildlife and wild places. Support NWF today! >>