Despite their dainty appearance, these backyard visitors are voracious predators 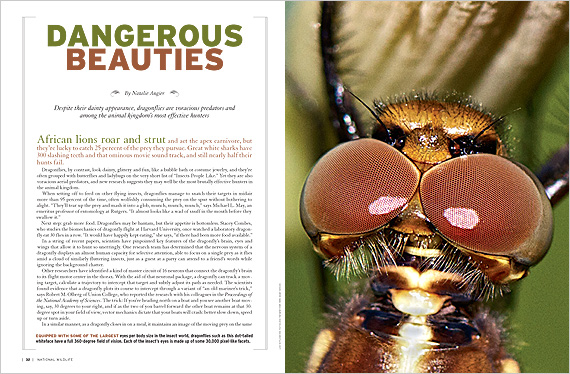 AFRICAN LIONS ROAR AND STRUT and act the apex carnivore, but they’re lucky to catch 25 percent of the prey they pursue. Great white sharks have 300 slashing teeth and that ominous movie sound track, and still nearly half their hunts fail.

Dragonflies, by contrast, look dainty, glittery and fun, like a bubble bath or costume jewelry, and they’re often grouped with butterflies and ladybugs on the very short list of “Insects People Like.” Yet they are also voracious aerial predators, and new research suggests they may well be the most brutally effective hunters in the animal kingdom.

Ambush Predators
When setting off to feed on other flying insects, dragonflies manage to snatch their targets in midair more than 95 percent of the time, often wolfishly consuming the prey on the spur without bothering to alight. “They’ll tear up the prey and mash it into a glob, munch, munch, munch,” says Michael L. May, an emeritus professor of entomology at Rutgers. “It almost looks like a wad of snuff in the mouth before they swallow it.”

Next step: grab more food. Dragonflies may be bantam, but their appetite is bottomless. Stacey Combes, who studies the biomechanics of dragonfly flight at Harvard University, once watched a laboratory dragonfly eat 30 flies in a row. “It would have happily kept eating,” she says, “if there had been more food available.”

In a string of recent papers, scientists have pinpointed key features of the dragonfly’s brain, eyes and wings that allow it to hunt so unerringly. One research team has determined that the nervous system of a dragonfly displays an almost human capacity for selective attention, able to focus on a single prey as it flies amid a cloud of similarly fluttering insects, just as a guest at a party can attend to a friend’s words while ignoring the background chatter. 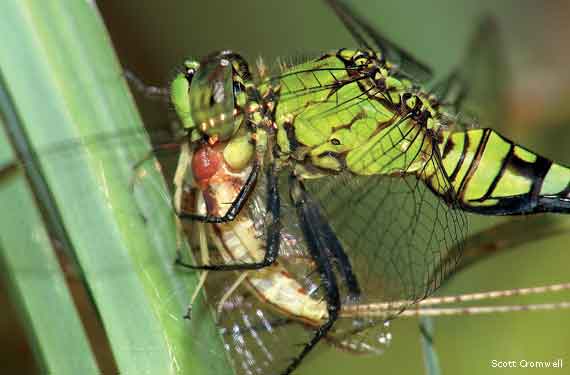 Other researchers have identified a kind of master circuit of 16 neurons that connect the dragonfly’s brain to its flight motor center in the thorax. With the aid of that neuronal package, a dragonfly can track a moving target, calculate a trajectory to intercept that target and subtly adjust its path as needed. The scientists found evidence that a dragonfly plots its course to intercept through a variant of “an old mariner’s trick,” says Robert M. Olberg of Union College, who reported the research with his colleagues in the Proceedings of the National Academy of Sciences. The trick: If you’re heading north on a boat and you see another boat moving, say, 30 degrees to your right, and if as the two of you barrel forward the other boat remains at that 30-degree spot in your field of view, vector mechanics dictate that your boats will crash: better slow down, speed up or turn aside.

In a similar manner, as a dragonfly closes in on a meal, it maintains an image of the moving prey on the same spot—the same compass point of its visual field. “The image of the prey is getting bigger, but if it’s always on the same spot of the retina, the dragonfly will intercept its target,” says Paloma T. Gonzalez-Bellido, an author of the report who now works at the Marine Biological Laboratory in Woods Hole, Massachusetts.

As a rule, the hunted remains clueless until it’s all over. “Before I got into this work, I’d assumed it was an active chase, like a lion going after an impala,” Combes says. “But it’s more like ambush predation. The dragonfly comes from behind and below, and the prey doesn’t know what’s coming.”

Aerial Acrobats
Dragonflies are magnificent aerialists, able to hover, dive, fly backward and upside down, pivot 360 degrees with three tiny wing beats, and reach speeds of 30 miles per hour—lightening fast for an arthropod. In many insects, the wings are simple extensions of the thoracic box and are moved largely as a unit by flexing the entire thorax. In the dragonfly, the four transparent, ultraflexible wings are attached to the thorax by separate muscles and can each be maneuvered independently, lending the insect an extraordinary range of flight options. “A dragonfly can be missing an entire wing and still capture prey,” Combes says.

Dragonflies also are true visionaries. Their eyes are the largest and possibly the keenest in the insect world, a pair of giant spheres each built of some 30,000 pixel-like facets that together take up pretty much the entire head. “They have a full field of vision,” Olberg says. “They can see you when they’re flying toward you and still see you when they’re flying away.”

Their other senses get short shrift. Dragonflies can’t really hear, and with their stubby little antennas they’re not much for smelling or pheromonal flirtations.

For neuroscientists, the dragonfly’s large head capsule, eyes and brain cells hold particular appeal. “It’s that much easier to insert tiny electrodes into single neurons and make neural recordings from inside the brain,” says Steven Wiederman of the University of Adelaide in Australia.

As they reported in Current Biology, Wiederman and his colleague David O’Carroll explored how dragonflies single out one target from a chaotic swarm. Working with the two-inch-long emerald dragonfly often seen darting around Australian ponds, the researchers inserted an electrode about 1/1500th the width of a human hair into a dragonfly neuron known to be involved in visual processing. They then positioned the dragonfly in front of an LCD screen and showed it first one and then two moving targets at a time. 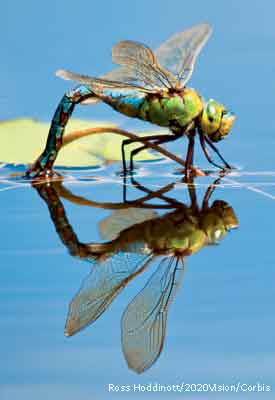 The scientists predicted that the dragonfly’s probed neuron would react to the competing targets as simpler nervous systems do, with the addition of the second target altering and degrading the response to the first. Instead, the scientists were amazed to find that the dragonfly attended to multiple stimuli in primatelike style, concentrating first on one target while ignoring the other, and then suddenly switching full attention to Target B, and then back to Target A—rather as we humans can sequentially shift our focus at a busy party from friend to friend, to a wineglass in need of a refill.

“It suggests the possibility of a top-down process of selective attention of the sort we normally associate with high-order thinking,” Wiederman says. “So here we have a simple brain of less than a million neurons behaving like our own brain of 100 billion neurons.” The scientists have yet to determine what cues might prompt a dragonfly to decide, “ah, there’s the target I will pursue.” Perhaps not surprisingly, much dragonfly research both in this country and abroad is supported by the United States military, which sees the insect as the archetypal precision drone.

Dragonflies are not a very species-rich group. Their order, Odonata, which means “toothed ones” after the notably serrated mandibles that crush prey, includes only some 7,000 species worldwide compared with hundreds of thousands of beetle and butterfly species. (And that 7,000 figure includes dragonflies, with their stiff wings, and the related damselflies, which can fold back their wings.)

Yet dragonflies are rich in history, their ancient lineage dating to the Carboniferous Period, some 300 million years ago. Back then, the atmosphere’s high oxygen content helped give rise to supersize dragonflies with wingspans the length of a human arm, three or four times the dimensions of today’s biggest tropical specimens.

Adults spend the great bulk of their days aloft, and not only to hunt and eat. Males spar with other males in midair and relentlessly swoop after females. Mating takes place on the wing, with male and female forming a circle that can look somewhat heart-shaped but is an awkward, aggressive affair. Grasping the female’s head in his mating pincers, the male first must transfer his sperm from a storage site on his lower abdomen to a copulatory organ inconveniently located on his upper abdomen. Then he must induce his headlocked mate to curl her genitals up toward that loaded midbelly penis. If she’s already mated, the male must pause to expand a little bristled lobe to scrape out the previous suitor’s sperm.

Some dragonfly species migrate long distances each year, a still-mysterious phenomenon not unlike the celebrated flight of the monarch butterfly. Recent studies have shown that green darner dragonflies migrate in sizable swarms each fall and spring between the northern United States and southern Mexico, while the globe skimmer dragonfly lives up to its name: It has been tracked crossing between India and Africa, a round-trip, multigenerational pilgrimage of some 10,000 miles.

Dragonflies migrate to maximize breeding opportunities, seeking warm freshwater ponds in which they can safely lay their eggs. From those eggs hatch dragonfly larvae: astonishing gilled predators that will spend from weeks to years hydrojetting through water and shooting their mouthparts after aquatic prey, until they’re ready to spread their wings and take the hunt to the sky.

Attracting Dragonflies to Your Yard 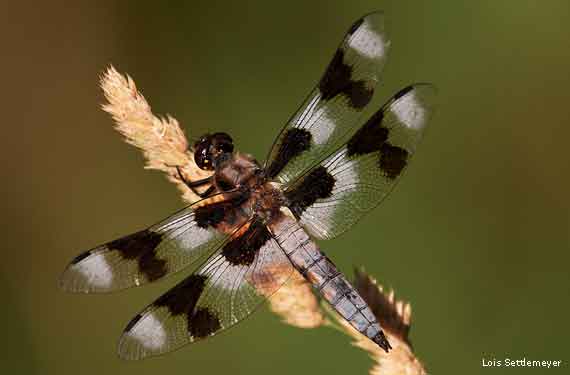 Dragonflies and damselflies belong to the insect order Odonata, and most members of this group rely on water throughout their life cycles. The juveniles, or nymphs, live underwater for months and sometimes years before emerging as adults; the adults tend to hunt for insects over water and lay their eggs in water or on adjacent vegetation.

Unless you live in the arid Southwest, your yard may be reasonably close to a stream, pond or wetland with a "source" population of the insects. Dragonflies are strong flyers, and though most individuals stay around their natal pond or stream, some of them will travel. So a backyard pond can attract these aerial acrobats to your yard.

The ideal dragonfly pond should vary in depth, be shallow at the edges and at least 2 feet deep in the center to provide nymphs with a refuge from predators. The British Dragonfly Society recommends building a pond that is about 20 feet in diameter, but under the right conditions, even a smaller pond or water feature will work.

To provide both developing nymphs and adults with perches, place underwater plants in a pond, including emergent vegetation such as sedges and rushes that stick up above the water’s surface. Experts also recommend growing native species of shrubs around the pond to provide more perching places.

For more gardening tips, become an NWF Wildlife Gardener. It's free and you can learn how to certify your yard as a Certified Wildlife Habitat® site.