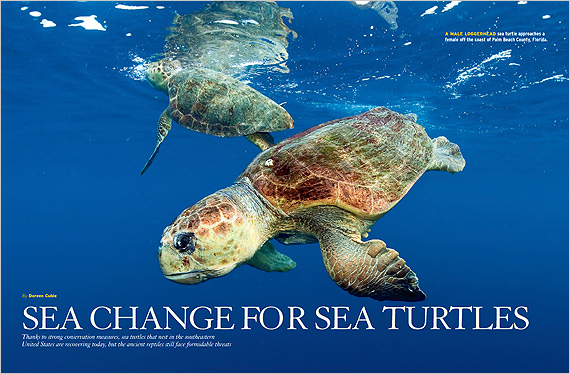 BEFORE AN AUDIENCE OF MORE THAN 300 PEOPLE, a half-grown loggerhead turtle named Portsmouth scooted down a beach in Sandbridge, Virginia, near the mouth of the Chesapeake Bay. The platter-sized, brown-and-white-speckled animal had been nursed back to health at Baltimore’s National Aquarium after swallowing two fishhooks and was wasting no time hustling back to freedom. Not long after Portsmouth slipped into the sea, researchers began tracking the young turtle’s movements with the aid of a satellite transmitter they had attached to its shell. “We’re trying to learn more about where loggerheads forage in the Chesapeake,” says Gwen Lockhart, a Virginia Aquarium and Marine Science Center geographic information system specialist who is following Portsmouth and a number of other loggerheads. “We also hope to better understand turtle migration patterns in and out of the bay.”

One thing scientists already know is that the Chesapeake Bay is one of the most significant North American nurseries for juvenile sea turtles. “It is very important developmental habitat for both loggerhead and Kemp’s ridley turtles,” says Kate Mansfield, who did her doctoral research in the Chesapeake and is now an assistant professor with the University of Central Florida’s Marine Turtle Research Group. The exact number of sea turtles in the bay is not known, but the Virginia Aquarium’s preliminary estimates show that between 7,000 and 10,000 individual turtles spend the summer months there feeding on whelk, blue crabs, hermit crabs and other prey.

Although green, leatherback and hawksbill turtles also have been documented in the Chesapeake, the vast majority are juvenile loggerheads like Portsmouth. One of the world’s seven sea turtle species, the loggerhead can weigh up to 450 pounds and grow a 44-inch-long shell. Named for their big heads, these reptiles’ powerful jaws evolved to crunch and consume hard-shelled prey such as mollusks and horseshoe crabs. The species ranges throughout the Atlantic, Indian and Pacific Oceans as well as the Mediterranean Sea. But the world’s largest concentration of nesting loggerheads is found on beaches of the southeastern United States, where more and more females are coming ashore each summer to lay their eggs.

“It’s pretty thrilling,” says Mark Dodd, a biologist for the Georgia Department of Natural Resources and the state’s sea turtle program coordinator who has seen nesting loggerheads in his state hit new highs for four years straight. “We think we’re seeing the beginning of a real trend.”

Turtles on the Rebound 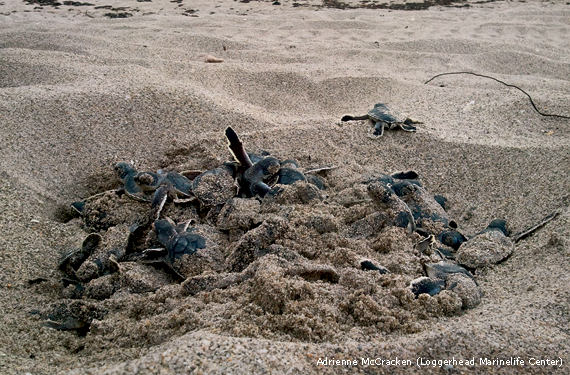 Loggerheads are not the only sea turtle species on the rebound. For green turtles (above), the story is even more remarkable. “They’re one of the greatest success stories in North American conservation,” says Llewellyn Ehrhart, a University of Central Florida professor emeritus who has studied green turtles since the 1970s. Like loggerheads, greens are found worldwide, but in the continental United States they nest primarily in Florida. Fifty years ago, renowned biologist Archie Carr, who almost single-handedly brought the plight of declining sea turtles to the world’s attention, estimated no more than 50 green turtle nests (laid by just five to eight individual turtles) were in the state. Even by 1989, the Florida Fish and Wildlife Conservation Commission located only 464 nests on the 26 Florida beaches it surveys each year. But by 2013, those same beaches hosted an amazing 25,553 nests. “It’s a miracle,” Ehrhart says.

Kemp’s ridleys (below), the rarest of all sea turtles, are bouncing back as well. Only 702 nests were tallied on their Tamaulipas, Mexico, nesting beaches in 1985. By 2012, there were nearly 22,000 nests, though that number dropped off to slightly more than 16,000 in 2013. Some Kemp’s ridleys also have begun nesting along the Texas coast, where the number of nests climbed from just six in 1996 to 209 in 2012. “Leatherback turtles are also doing quite well in the southeastern U.S.,” Ehrhart says. The largest of all sea turtles, these massive reptiles can weigh as much as 1,200 pounds.

Other simple but effective measures—such as turning down lights on nesting beaches—might not have happened without the act. Baby turtles hatch during the night and instinctively head for the brightest spot on the horizon, which historically had been the ocean. But as shorelines developed, street lamps and brightly lit buildings began to overwhelm the glow from the sea, and hatchlings often headed inland where they were crushed by cars or baked in the hot sun. Once sea turtles gained ESA protection, many coastal communities in the Southeast enacted laws eliminating or reducing beachfront lighting. “These local lighting ordinances have played a huge role in protecting sea turtles,” says Ann Marie Lauritsen, Southeast sea turtle coordinator for the U.S. Fish and Wildlife Service.

Fish and shrimp nets also used to trap and kill thousands of turtles a year off the U.S. coast. (Sea turtles must surface to breathe or they will drown.) After a long effort by NWF and other conservation groups, turtle excluder devices (TEDs)—which provide turtles an escape route if they are caught by shrimp nets—became mandatory in U.S. waters in 1993. The number of dead loggerhead and Kemp’s ridley turtles washing ashore dropped immediately and dramatically. Green turtles, which inhabit shallower water and feed primarily in seagrass beds, benefited significantly from a 1994 statewide ban on gill nets in Florida. 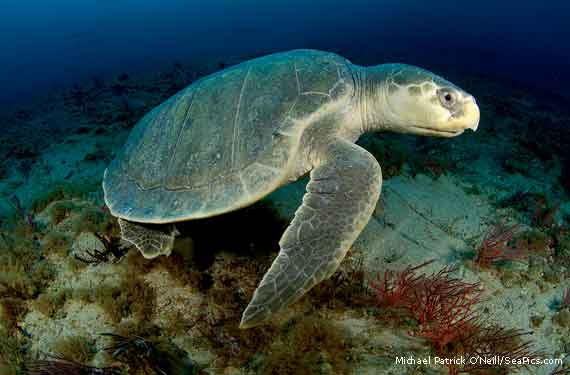 “We’ll never know which conservation measure was responsible for the turnaround,” Dodd says. “It was probably all of them.” But he cautions that sea turtles are not yet out of the woods, and the list of threats remains long. Beachfront development is taking away nesting habitat. Longline fishing in the open ocean hooks and drowns many turtles. Climate change and sea-level rise lurk on the horizon. And oil spills such as the 2010 Deepwater Horizon disaster in the Gulf of Mexico are deadly to turtles.

Water pollution is also a problem, especially in estuaries like the Chesapeake Bay, where polluted runoff and sediment from eroding stream banks can smother seagrass beds crucial for juvenile turtles. Thanks to the efforts of conservationists, which have led to new laws and regulations, the bay’s water quality is slowly improving. “We have made great progress in cleaning up the Chesapeake Bay, but what we have accomplished so far is not enough,” says Hilary Falk, director of NWF’s Mid-Atlantic Regional Center. She notes that while pollution entering the bay has declined during the past decade, new stressors such as climate change and human population growth continue to impede restoration. “We must improve water quality to a level where it can sustain both wildlife and the living resources, such as crabs and oysters, that are an economic driver for the region.”

Meanwhile, polluters still challenge limits established under the Clean Water Act more than a decade ago. In 2011, the American Farm Bureau sued the U.S. Environmental Protection Agency (EPA) in an attempt to overturn a federal pollution cleanup plan for the Chesapeake, claiming the agency did not have authority under the act to establish the plan. NWF intervened on behalf of EPA to support the agency’s authority, and last year a U.S. district court judge upheld the plan. “This decision gives EPA the authority it needs to move ahead to clean up the bay,” says NWF Senior Counsel Jim Murphy. “It will have a direct, positive effect on the Chesapeake’s sea turtles.”

Despite continuing threats to sea turtles, most biologists remain optimistic. “Turtles have survived ice ages and warm periods,” Dodd says. “They’ve been on the planet a long time.” Ehrhart also is hopeful. He believes continued protection of nesting beaches is the key: “If we can keep hatchlings streaming off the beaches every year, sea turtles can survive a tremendous amount of abuse.”

Luckily, nesting turtles have an army of biologists, interns, volunteers and other seasonal workers on their side. During spring and summer, these “turtle crews” (right) fan out across beaches from Virginia’s Back Bay south to Florida and west to Padre Island, Texas, to protect and manage as many nests as possible. Some members work for national wildlife refuges, some for state agencies or town governments, and some just do it as a labor of love. Setting out on foot or all-terrain vehicles, workers patrol nesting beaches every morning looking for “turtle crawls”—distinctive tracks made by females as they laboriously pull themselves across sand to the edge of the dunes. Once there, turtles dig a hole with their rear flippers and, depending on the species, lay 60 to 220 rubbery, ping-pong-ball-sized eggs. 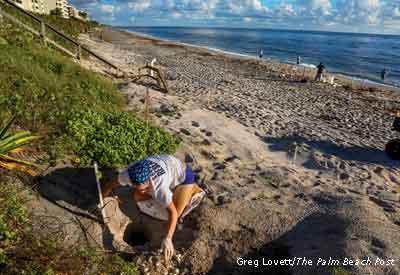 When crewmembers find a crawl on smaller beaches, they locate and mark the nest and keep a protective eye on it during the incubation period, which lasts 50 to 80 days. (On larger beaches, they mark only some nests.) If a nest is in a precarious location, they may dig it up and move it to safer ground. Workers often put wire cages around nests to keep raccoons, feral hogs or other predators from eating the eggs. After the young turtles have headed to sea, the crew conducts an inventory of the nest, counting the number of hatched and unhatched eggs, which helps biologists determine the success of each clutch.

Sometimes during the inventory a crewmember will pull out a live hatchling that hasn’t yet made it to the surface. One foggy morning on South Carolina’s Hilton Head Island, Dawn Brut did just that. Brut, who works for the Coastal Discovery Museum, is also a member of the island’s eight-person turtle crew. She was checking a recently hatched loggerhead nest when she unexpectedly found the baby turtle.

As she lifted the creature out of the nest, its flippers waved furiously in the air. Brut gently brushed sand off the tiny turtle and set it down on the beach. At first, it didn’t move. But when a wave washed over it, the turtle began to crawl to the sea. A second breaker upended it, but the hatchling persisted, tenaciously battling the incoming tide. Finally, it dipped under a cresting wave and disappeared into the dark ocean, one more small victory in a very big conservation success story.

Like Mother, Like Daughter
University of Georgia researchers Campbell J. Nairn and Brian Shamblin have discovered 50- to 60-year-old loggerhead mothers nest on the same beaches as their 25- to 30-year-old daughters. They’ve learned this by taking one egg from each nest laid in Georgia and the Carolinas, which enables them to analyze the mother’s DNA. With these “genetic fingerprints,” the scientists hope to identify individually every female and determine exactly how many loggerheads are nesting in the three states.


NWF Priority: Protecting the Chesapeake
NWF’s Mid-Atlantic Regional Center works to protect the natural beauty and wildlife that make the Chesapeake Bay a special place. It does this by facilitating coalitions and working with affiliates, partners and others in the region to restore and protect the bay, promote clean energy and deploy NWF’s suite of educational programming to connect people to nature through improved water quality.