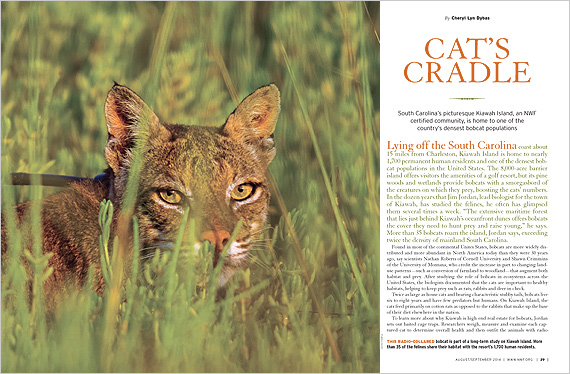 LYING OFF THE SOUTH CAROLINA COAST about 15 miles from Charleston, Kiawah Island is home to nearly 1,700 permanent human residents and one of the densest bobcat populations in the United States. The 8,000-acre barrier island offers visitors the amenities of a golf resort, but its pine woods and wetlands provide bobcats with a smorgasbord of the creatures on which they prey, boosting the cats’ numbers. In the dozen years that Jim Jordan, lead biologist for the town of Kiawah, has studied the felines, he often has glimpsed them several times a week. “The extensive maritime forest that lies just behind Kiawah’s oceanfront dunes offers bobcats the cover they need to hunt prey and raise young,” he says. More than 35 bobcats roam the island, Jordan says, exceeding twice the density of mainland South Carolina.

Found in most of the continental Unites States, bobcats are more widely distributed and more abundant in North America today than they were 30 years ago, say scientists Nathan Roberts of Cornell University and Shawn Crimmins of the University of Montana, who credit the increase in part to changing land-use patterns—such as conversion of farmland to woodland—that augment both habitat and prey. After studying the role of bobcats in ecosystems across the United States, the biologists documented that the cats are important to healthy habitats, helping to keep prey such as rats, rabbits and deer in check. 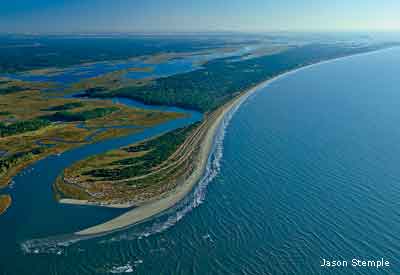 Twice as large as house cats and bearing characteristic stubby tails, bobcats live six to eight years and have few predators but humans. On Kiawah Island (left), the cats feed primarily on cotton rats as opposed to the rabbits that make up the base of their diet elsewhere in the nation.
To learn more about why Kiawah is high-end real estate for bobcats, Jordan sets out baited cage traps. Researchers weigh, measure and examine each captured cat to determine overall health and then outfit the animals with radio collars that use satellites to track their wanderings.

During the past 12 years, Jordan and colleagues at the University of Georgia and other institutions have monitored more than 60 island bobcats. “With GPS data,” Jordan says, “we can identify the corridors where bobcats travel. They use marsh edges, golf courses and other landmarks as feline highways. Kiawah has an abundance of these serpentine features.” By giving the cats safe passages in an increasingly human-dominated environment, these habitat features, along with the rich prey base of cotton rats and other species, are key to the island’s dense bobcat population.

Kiawah’s stands of loblolly pines, its glossy wax myrtle shrubs and its long, sandy beaches have something else going for them: The entire island is an NWF certified community, one of more than 70 across the nation. “Our healthy bobcat population and efforts to protect it were major contributors to receiving this status,” says Dave Achey, director of land management at the Kiawah Island Community Association. He spearheaded the effort to obtain certification, which requires that towns and cities meet certain standards for supporting wildlife habitat. Community habitats are part of the Federation’s Garden for Wildlife™ program, under which more than 150,000 habitats at private homes, schools, businesses, government buildings and parks nationwide provide wildlife with natural food, water, cover and places to raise young.

In 2005, Dale Anderson, who lives on Kiawah’s west end, was the first homeowner on the island to have his yard designated as an NWF certified wildlife habitat. Now dozens more are located at single-family homes on the island. “I’m proud to share my yard with bobcats,” Anderson says.

Last January, a bobcat heralded the New Year for Anderson. “I glanced out my kitchen window on New Year’s morning,” he says, “and at the end of my driveway was a bobcat, just standing there and looking at me. In another minute or two, the cat, a female, was joined by her several-month-old kitten. She gave it a signal to come out of the woods that seemed to say ‘get your tail over here.’ Then they both disappeared around the side of the garage.”

Anderson’s sighting is one of hundreds made on Kiawah every year, says Bill Lacey, manager of The Sanctuary, a 255-room hotel that’s an island centerpiece, with its grounds serving as an NWF certified habitat. “Bobcats are often seen along the edges of our driveways and sometimes much closer to the hotel,” Lacey says. “One evening we had a bobcat stroll across The Sanctuary’s Grand Lawn, which overlooks the ocean. The cat looked like it might have owned the place.”

Folks on Kiawah might see a bobcat just about anywhere, Jordan says. One family arrived home at the end of a day and surprised a bobcat in their front yard. The cat jumped out of a swaying palm and bolted for the shade. “I don’t know who was more startled,” Jordan says, “the people or the cat.”

Bobcats have been spotted sitting on manhole covers, docks, golf courses and beach boardwalks. A few cats have relaxed on decks, dozing away the day.

Others nap under the island’s abundant trees and shrubs. Last February, Liz King, director of Outdoor Programs for the Kiawah Island Golf Resort, heard crows creating a ruckus. “They weren’t happy about something,” King says. “At first I thought they were harassing a hawk, but it turned out to be a bobcat snoozing under a wax myrtle.”

Once in a while, bobcats are in places people wish they weren’t. Late one afternoon Jordan received a call that a bobcat was swiping Koi goldfish from an ornamental pond near the front doors of a hotel. When Jordan arrived, the cat was sprawled on the side of the pond, scooping up one fish after another. “He finally finished his snack and slowly eased off toward a brush pile,” Jordan says.

Although Kiawah Island bobcats dine primarily on rodents much of the year, in summer months they feed mostly on white-tailed deer fawns, accounting for 67 percent of fawn mortality on Kiawah. The thriving bobcat population helps keep island deer in check, says Achey. “Deer control is one of the keys to Kiawah’s conservation. The high rate of bobcat predation has eliminated the need for deer management, the envy of many a suburb.”

Without bobcats, Jordan says, “deer would soon be overabundant, resulting in damage to natural habitats and human property and in human injuries from deer-vehicle collisions.” 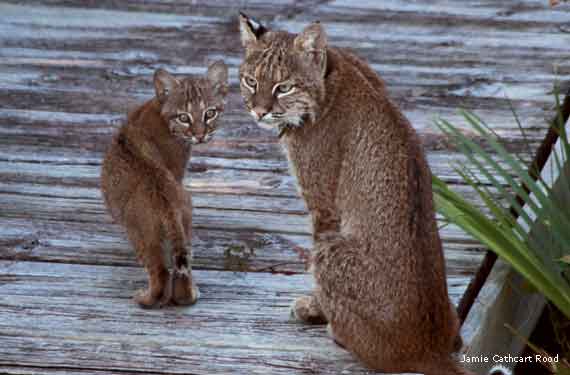 Although Kiawah Island clearly ranks as optimal bobcat habitat, with each passing year its unbroken, brushy forest becomes more fragmented in the wake of housing and road development. However, traffic volume is a better predictor of bobcat mortality on Kiawah than is any other factor, Jordan found. “Roads are the number one threat to our bobcats,” he says. “More are killed on highways than for any other reason. We ask that residents and visitors slow down for cats.”

Although research on Kiawah’s bobcats shows that the island has a stable, healthy population, Jordan has found that the overlapping home ranges of cats living on the more-developed west end are larger than those of cats on the less-developed east end. In one study, the average west-end bobcat’s home range covered 2,195 acres for a male and 1,576 acres for a female; east-end males needed 1,782 acres, and east-end females 687 acres. “West-end development may be forcing bobcats to travel greater distances—and across more roads—to find the necessities of life, such as food, cover and water,” Jordan says.

Although bobcats display an amazing ability to make the best of a rapidly changing environment, Jordan says, “more upheaval is coming. In the short-term, increasing development, and in the longer term, the effects of global warming.” Experts believe that climate change will result in a sea-level rise that could inundate low-lying Kiawah Island, suggesting that the good life for bobcats there may be fleeting. But for now, the felines benefit from a safe haven where their presence is appreciated by human neighbors. “Growing up in a family of avid outdoorsmen, these types of sightings weren’t unusual for me when I was out in the woods,” Jordan says, “but I was amazed to find these same animals literally living in people’s backyards.”

One aspect of Kiawah Island that makes it a haven for bobcats is its status as an NWF certified community, one of more than 70 across that nation that provide for the habitat needs of local wildlife under the Federation's Garden for Wildlife™ program. The yards of schools, businesses, government facilities and homes can all become certified if they meet certain standards for providing wildlife with natural food, water, cover and places to raise young.

Become a NWF Wildlife Gardener. It's free and you will receive great gardening tips and learn how to certify your yard or community as a Certified Wildlife Habitat® site.

Cheryl Lyn Dybas is an ecologist and science journalist based in Virginia.