Building a Sustainable Cattle Ranch on the Range

A new generation of progressive ranchers is pushing another product alongside its grass-fed beef: conservation 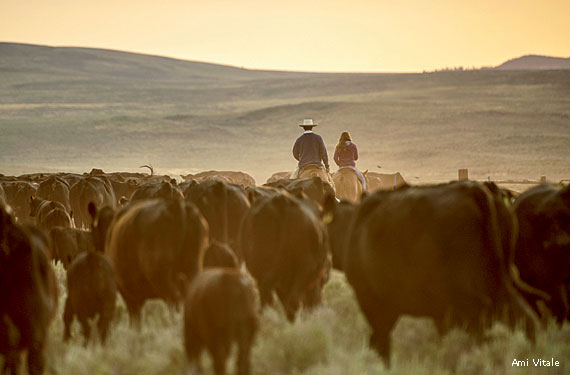 MONTANA'S CENTENNIAL VALLEY offers a glimpse of the iconic West as it once was: sweeping grasslands framed by distant mountains cloaked in an ominous sky. Home to wolves, grizzlies, elk and pronghorn, the Centennial’s wide-open expanse provides a key migratory corridor into Yellowstone National Park. It also is prime ranching country.

Cattle and wildlife have not always coexisted well, but here in southwestern Montana and other pockets of the West, a new type of conservation-minded ranching is taking hold. “We want to ranch in a way that gets back in synch with nature,” says Bryan Ulring, manager of the J Bar L Ranch, a sprawling 30,000-acre facility that markets its meat under the brand Yellowstone Grassfed Beef. “Our goal is to manage for biodiversity,” he adds, while simultaneously reducing expenses and increasing profits.

Instead of six-strand barbed wire fences that block migratory wildlife, J Bar L uses portable, solar-powered, single-strand electric fences that keep cattle in place but allow wildlife to pass through or around. If wolves den near or harass their herds, Ulring and his ranch hands temporarily move their cattle as soon as they are aware of the problem rather than going after the predators with rifles. Cattle are kept out of some habitat areas during nesting season and other sensitive periods in sage grouse and trumpeter swan life cycles. And rather than putting the cattle out to pasture and letting them graze wherever they please, the ranchers confine the animals in tight clusters to graze for a day or two in one area and move them frequently to new locations. In adopting these measures, Ulring is trying to mimic patterns of the bison herds that once thundered through the region along with their predators.

Ranching in this manner requires a different workload, but Ulring and other progressive western ranchers believe the benefits are worth the trouble: richer wildlife habitat on their lands and grass-fed beef that may be more expensive for consumers but that is healthier to eat than corn-fed, antibiotic-laden cattle produced in industrial feedlots. The majority of the cattle raised in those feedlots spend the first six months of their lives as we would like to imagine: out on the land, suckling mother’s milk and eating grass, much of it on publicly owned lands in the West.

Grazing takes place on 260 million acres of public lands, a footprint that dwarfs oil and gas development, timber cutting, mining and other commercial-resource extractions. It is no exaggeration to say that ranching and grazing have transformed much of the western landscape. The nonprofit Idaho-based group Western Watersheds Project, which monitors regional waterways, reports that 80 percent of streams in the arid West are degraded by livestock.

Cattle arrived on the public domain lands of the West in the late 1800s and “King Cattle” was born, subsidized by government programs to slaughter bison and eradicate predators and prairie dogs. Invasive species were introduced into many areas, and streams were channeled into irrigation ditches to grow hay for winter, others trampled into muddy wallows.

In 1934, President Franklin D. Roosevelt signed into law the Taylor Grazing Act, intended to “stop injury to the public grazing lands.” The law established a system of allotments and grazing permits and a legal framework that, while it since has been updated, remains largely intact today.

But reforming this system is challenging, in part due to the ranching industry’s strong political backing in Washington, D.C. “They have fought hard to minimize oversight by government land management agencies,” says Tom France, NWF senior director of western wildlife conservation. In June, the Federation sent a letter to the U.S. Senate opposing legislation that would weaken environmental reviews of grazing permits.

With legislative reforms difficult to achieve, conservation groups, including NWF, too often relied in past decades on litigation. “Litigating is tough because you are attacking the ability of federal permit holders to make a living,” says France. These days, conservation groups and federal land management agencies are trying a new tactic: collaboration.

Financial incentives, conservation easements and restoration projects in riparian areas are part of the recent push to partner with ranchers. Buyouts are another tool. Since 2002, NWF has utilized a market-based approach to pay ranchers to give up their grazing allotments on public lands and then convince federal authorities to permanently retire the permits, safeguarding those areas for wildlife habitat. (See sidebar.) “We’ve made progress over the past two decades,” France says.

Collaboration is vital, adds Nathan Korb, science and stewardship director for The Nature Conservancy in southwestern Montana. “Private landowners own most of the highly productive valley bottoms and riparian areas. We have to work with them.”

Like family farmers, many ranchers make a slim profit that barely allows them to carry on their way of life. As a result, financial strain is at the heart of many grazing problems. “If you have a big note at the bank, you need to run a certain number of cattle and push the land harder,” says Duke Phillips, owner of the 87,000-acre Chico Basin Ranch in Colorado. Several years ago, he came to the conclusion that traditional ranching techniques were unsustainable both for the land and his family’s future.

Chico Basin, like J Bar L, is now a grass-fed beef operation that is attempting to practice a more wildlife-friendly form of ranching. It sells its meat through the brand Lasater Grasslands Beef. By charging more for a higher-quality product, Chico Basin and J Bar L can afford to ranch more sustainably. They also have prospered by diversifying their revenue stream. Both are part of a growing movement to provide ecotourism opportunities and ranch stays that bring paying guests to ride horses, fish and recreate. NWF backs this trend. “We strongly support ranches diversifying and offering guest stays, fishing and hunting opportunities,” says John Kostyack, NWF vice president of wildlife conservation.

Some of the new thinking on wildlife-friendly ranching, however, needs more study. High-intensity grazing meant to mimic bison herds has, at least anecdotally, improved grassland conditions and wildlife diversity at Chico Basin and J Bar L. The idea is to concentrate the dung, urine and hoof action to turn and fertilize the soil, promote water absorption and increase the amount of soil insects. But many landowners remain skeptical about such practices.

Ranchers can be slow to accept new techniques, Phillips says. “It’s a generational thing,” he notes. “We are accustomed to following practices that were handed down to us by our forefathers.” Yet he, for one, understands the need for change. Chico Basin Ranch, says Phillips, is raising more than just cattle these days. “We view conservation as a product just like beef.”

NWF Takes Action: Safeguarding Habitat
Through its Adopt a Wildlife Acre program, which has been compensating ranchers for retiring grazing allotments on federal land since 2002, NWF has phased out livestock grazing on more than 600,000 acres in key areas of the Northern Rockies where wildlife range. To learn more, including how you can help, visit www.nwf.org/wildlifeacre.

California journalist Paul Tolmé wrote about the impacts of drought and fire on wildlife in the August/September issue.