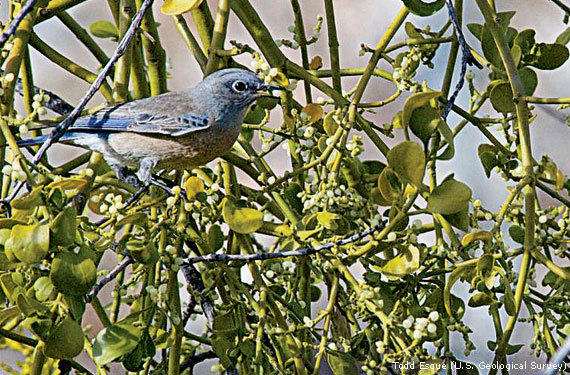 LONG BEFORE IT BECAME AN EXCUSE TO STEAL A KISS, mistletoe became a vital component in forest ecology, thriving on every continent except Antarctica. Nearly 40 of the world’s 1,400 mistletoe species occur in the United States.

All mistletoes grow as parasites on the branches of trees and shrubs, sucking up nutrients and water via roots that extend into the host’s bark. As they mature, they grow into thick, often basketlike masses of branches and stems, sometimes called “witches’ brooms,” that can reach 5 feet wide and weigh 50 pounds.

Following are some of the surprising discoveries scientists have made during the years about these ubiquitous plants. Perhaps you can use these facts to distract a would-be kisser trying to corner you under a hanging sprig this holiday season:

Mistletoes produce berries, each containing one sticky seed that can attach to animals for a ride to new growing sites. The ripe berries of dwarf mistletoe, a variety native to the western United States and Canada that infects only pines and junipers, also can explode, ejecting seeds at an initial average speed of 60 miles per hour and scattering them as far as 50 feet.

The parasitic plants may make trees more susceptible to bark beetles and fungus, says David Watson, a biologist at Australia’s Charles Sturt University who has studied the plants for more than 30 years. “At the stand and population level,” he says, “the effects of mistletoes are negligible, and many foresters consider mistletoe to be a powerful, positive force in forests, weeding out those trees poorly matched to the area and ensuring long-term forest health and tree vigor.”

A variety of birds nest directly in witches’ brooms, including house wrens, chickadees, mourning doves and pygmy nuthatches. Researchers found that 43 percent of spotted owl nests in one forest were associated with witches’ brooms and that 64 percent of all Cooper’s hawk nests in northeastern Oregon were in mistletoe. Several tree squirrel species also nest in witches’ brooms.

The mistletoe’s berries are favored as food during autumn and winter by mammals such as deer, squirrels and porcupines and by birds such as robins, chickadees and mourning doves. “The fruits are very high quality as a rule, with some species really rich in fat and others full of protein,” Watson says. But beware: Some species are poisonous to humans.

Extracts from mistletoe—used in Europe to combat colon cancer, the second greatest cause of cancer death in Europe and the Americas—show signs of being more effective against cancer, and less toxic to humans, than standard chemotherapy.

Find out how to create your own Certified Wildlife Habitat site >>