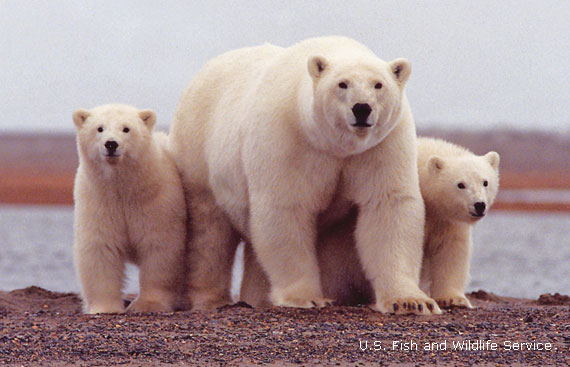 STANDING UP FOR WILDLIFE AND OUR CHILDREN'S FUTURE is not for the fainthearted. We have broken the climate system that has served humanity well for more than 11,000 years, and we are entering into an epoch that is unknown in Earth’s history. When did the simple concept of leaving the planet a better place for our kids become a partisan issue? Why are worldwide emissions of carbon dioxide, methane and other greenhouse gases still increasing when they need to be declining dramatically?

We must take unprecedented steps to dramatically reduce carbon pollution and give wildlife refuge and resilience from a rapidly changing climate. Today, more than ever, we must ignore manipulative advertisements and misinformation campaigns by oil companies and other polluters and listen carefully to what scientists are telling us.

We are facing an impending planetary crisis, and there is no time for delay. Every day we dither, the risks grow more acute and meaningful actions to solve the crisis become more difficult to achieve. While the environmental challenges facing the world clearly are complex and arduous, solving global warming is not so much a technical problem as it is a political challenge. We must transit to secure, efficient and clean-energy solutions at a speed, scope and scale that will create durable U.S. jobs and keep our dollars and our soldiers at home while protecting the nature of tomorrow.

We also must think globally. At the United Nations Framework Convention on Climate Change in Warsaw, Poland, last November, we saw our greatest hopes for a comprehensive solution to global warming nearly dashed by divisiveness and weak commitments. The United States’ unwillingness to participate in the 1997 Kyoto conference on climate change was a significant cause of the failure of that meeting. Our continued lackluster leadership must end. We have lost another critical year to act as a world community.

The United States must demonstrate to world leaders that our nation is moving beyond the flawed past and taking substantial actions. Without a strong signal from us, international leaders may not be emboldened to move to a second agreement. We must abandon our profligate consumption of fossil fuels. We must unite to give voice to this great healing opportunity. We must signal to the world that the U.S. public is forcing change in Washington, D.C., and that we will move from being a global laggard to a global leader in the fight to reduce global-warming pollution. We must each look within ourselves and ask, “Will I find the courage to fight climate change for wildlife and for future generations while there is still time?”

On a visit last fall to Churchill, Manitoba, my companions and I watched hungry polar bears gather on the shores of Hudson Bay, waiting for the winter cold that would allow them to hunt seals on the sea ice. Warming temperatures have extended the Bay’s ice-free summer when the bears fast by nearly three weeks, from an average of 120 days in the 1970s to about 140 days in recent years. I was saddened to think that we are the cause of these changes and that polar bears and other wildlife suffer from our inaction. My fellow traveler Eileen Rockefeller also was moved and soon afterward penned this poem she entitled Imagining:

I approach you now, white Ursa
of the starving frozen north,
with apologies for the weather.
I see you by the edge of ice
awaiting its arrival like
glass dinner plates with seals below.
Something tells me you know
the origins of your woe.

I come here with head bowed
humbled by your fortitude
and my great fortune
to see you close
enough to smell your sour belly,
and hear it growl.
Ursa, I'm not done with you
or the rising CO2
which I have added to.

Teach me your prayers;
show me your cubs and your lairs
and I will weave your hairs
into dream-weavers
above every child’s bed
and each worker’s desk.
For I see you, polar canary bear
sniffing the warming air,
and standing like all of us, on thin ice.

Eileen Rockefeller is a venture philanthropist and author of a recently published book Being a Rockefeller, Becoming Myself: A Memoir (Blue Rider Press).