After two decades of debate, a group of water consumers finally approved a plan to protect two vital underground springs in Texas 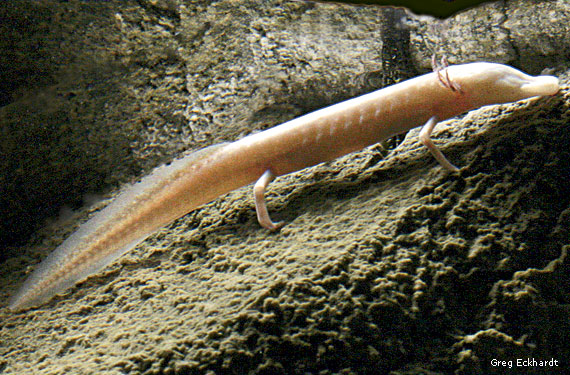 THE TEXAS BLIND SALAMANDER moves slowly on sticklike legs, detecting minute changes in water pressure that signal the presence of its small invertebrate prey. Red gills extend from the salamander’s flattened head like outsized, feathery ears, and faint spots mark where eyes once were found.

These odd, 3-inch-long creatures live entirely underground in Texas’ Edwards Aquifer—except when one occasionally pops out of San Marcos Springs, a cluster of 200-plus outflows that feed the San Marcos River. When that happens, the salamander quickly becomes fish food. And even underground, this species is far from safe. No one knows how many of the salamanders survive, but experts agree that the creatures face almost certain extinction if aquifer water levels fall too low.

Now, however, the endangered amphibians may be getting a new lease on life. Last year, after two decades of debate, the U.S. Fish and Wildlife Service (FWS) finally approved a new Habitat Conservation Plan (HCP) that protects both San Marcos Springs and nearby Comal Springs, the largest natural spring in the Southwest. Both natural treasures depend on water supplied by Edwards Aquifer, a vast underground reservoir that stretches nearly 200 miles across southern Texas. In addition to the salamander, several other endangered species inhabit the springs.

For decades, multiple water agencies in the region tapped into the aquifer with little cooperation among them to limit use or protect the springs. Then, in 1991, the Sierra Club filed a lawsuit seeking minimum flows to protect blind salamanders and other endangered residents of the springs. To save those species, FWS eventually suggested developing a plan that required support from a widely disparate group of stakeholders, including area municipalities, state agencies, environmentalists, farmers, businesses and outdoor enthusiasts.

“One of the key challenges was overcoming distrust and entrenched positions developed over decades of conflict,” says Myron Hess, manager of NWF’s Texas Living Waters program, who played a major role in creating the final HCP. “Early on, we decided to include everyone in the decision-making process in order to get broad buy in. We all agreed to trust the science.”

The plan includes habitat restoration and mitigation to minimize stress on the endangered species from low water flows. It also sets goals to keep flows at both springs at secure levels. “This is the most progress we’ve ever made in trying to reach a solution to this problem,” says Glenn Longley, director of Texas State University’s Edwards Aquifer Research and Data Center.

For local communities, the economic benefits of maintaining appropriate water levels are huge. Indeed, the recreational value of the springs and the rivers they create alone provide “a big incentive for seeing that the plan succeeds,” says Melani Howard, HCP coordinator for the City of San Marcos.

Beyond protecting water supplies and imperiled species, Hess says, “the HCP also recognizes how magical these springs are. Two rivers just suddenly emerge from the ground. I feel a real obligation to pass that magic on to future generations.”

NWF Priority: Protecting Texas Waters
For years, NWF’s Texas Living Waters program has worked with partners to safeguard wildlife habitats and freshwater supplies in the Lone Star State, while also educating the public about the need for increased water efficiency. “It’s imperative we tap into our supplies sustainably, using them only as fast as nature can replenish them,” says NWF program manager Myron Hess.

This January, Secretary of the Interior Sally Jewell presented one of the Department of Interior's 2013 Partners in Conservation Awards to the Edwards Aquifer Recovery Implementation Program's Habitat Recovery Plan that Texas Living Waters partners had help craft. This was one of 20 partnership projects that have received such an award for demonstrating exemplary natural resource conservation efforts through public-private cooperation.

Melissa Gaskill is based in Texas.