Images of Animals NWF is Working to Protect 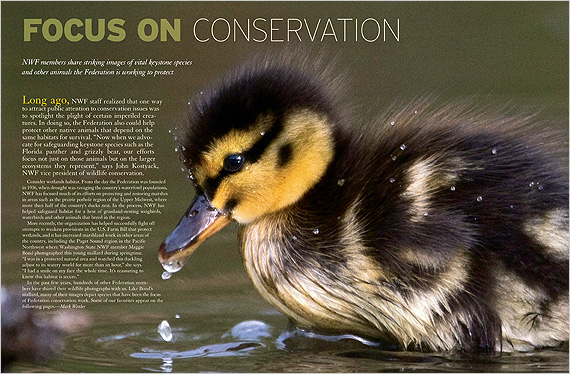 LONG AGO, NWF STAFF REALIZED that one way to attract public attention to conservation issues was to spotlight the plight of certain imperiled creatures. In doing so, the Federation also could help protect other native animals that depend on the same habitats for survival. “Now when we advocate for safeguarding keystone species such as the Florida panther and grizzly bear, our efforts focus not just on those animals but on the larger ecosystems they represent,” says John Kostyack, NWF vice president of wildlife conservation.

Consider wetlands habitat. From the day the Federation was founded in 1936, when drought was ravaging the country’s waterfowl populations, NWF has focused much of its efforts on protecting and restoring marshes in areas such as the prairie pothole region of the Upper Midwest, where more than half of the country’s ducks nest. In the process, NWF has helped safeguard habitat for a host of grassland-nesting songbirds, waterbirds and other animals that breed in the region.

More recently, the organization has helped successfully fight off attempts to weaken provisions in the U.S. Farm Bill that protect wetlands, and it has increased marshland work in other areas of the country, including the Puget Sound region in the Pacific Northwest where Washington State NWF member Maggie Bond photographed this young mallard during springtime. “I was in a protected natural area and watched this duckling adjust to its watery world for more than an hour,” she says. “I had a smile on my face the whole time. It’s reassuring to know this habitat is secure.”

In the past few years, hundreds of other Federation members have shared their wildlife photographs with us. Like Bond’s mallard (above), many of their images depict species that have been the focus of Federation conservation work. Some of our favorites follow. 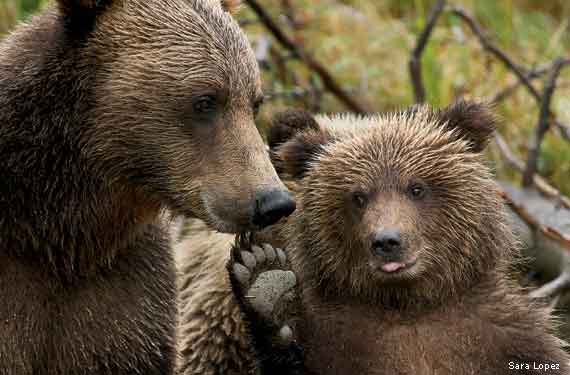 Though not far from Anchorage, Alaska, Lake Clark National Park and Preserve is accessible only by floatplane. “It’s an unbelievably beautiful place,” says Florida member Sara Lopez, who photographed this female grizzly and her cub during a late-summer trip to the reserve. “They were waiting to feed on salmon, and I was mesmerized by them.”

Lake Clark is among the more than 150 million acres of habitat for grizzlies and other wildlife that received permanent protection as national parks, wildlife refuges and wilderness areas with passage of the federal Alaska National Interest Lands Conservation Act in 1980. Similar legislation had collapsed in the U.S. Congress the previous two years under intense lobbying by the mineral and timber industries.

“The Federation put more of its resources into passage of the law in 1980 than it had done with any other legislation before,” said Pat Goggin-Robles, NWF legislative representative at the time. “It was a major victory."

Since then, NWF also has put considerable effort into protecting grizzlies in the Lower 48. In recent years, for instance, it has secured more than 600,000 acres of habitat for the bears and other species in the Northern Rockies through its Adopt a Wildlife Acre program. 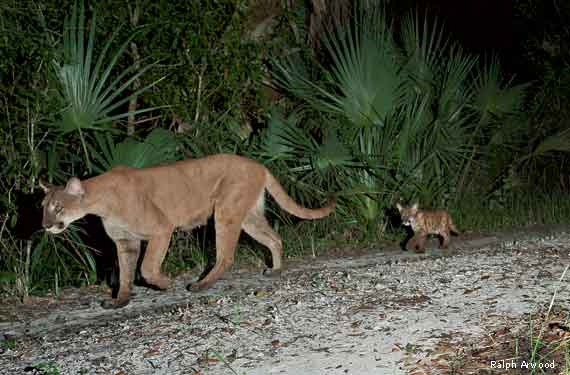 Under the cover of darkness, a female Florida panther and her 3-month-old kitten move through Corkscrew Swamp Sanctuary. Reader Ralph Arwood made the photo with a trail camera armed with an infrared motion sensor that automatically trips the shutter. Atwood has been operating trail cameras in the reserve for the past few years as a volunteer, helping scientists expand knowledge of the animals in southwest Florida.

“Trail cameras are hit and miss,” he says. “Sometimes I get multiple pictures of panthers in a week. Other times I can go several months without getting any images of them. If I get one great picture a year per camera I’m happy.”

Through public outreach campaigns and successful lawsuits to protect habitat, NWF and its affiliate the Florida Wildlife Federation have been heavily involved in efforts to save the nation’s most endangered cat since the early 1980s, when only about 30 of the felines remained. Such efforts have helped the Florida panther recover—nearly 160 live in the wild today—but serious threats to the animals persist. 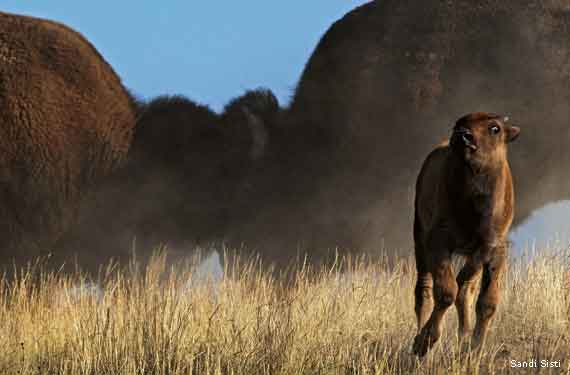 “Hayden Valley in Yellowstone National Park is a fascinating place in August when bison are breeding,” says Wyoming member Sandy Sisti. “It was the first time I’d seen them during the rut, and I had no idea how quickly they move.” When these two males began sparring, other bison immediately cleared out, adds Sisti, who made this striking image before retreating to her car.

American bison once played a key role in the nation’s prairie ecosystems, but until recently the country’s last remaining herds of the purebred mammals—about 4,600 animals in all—survived only in Yellowstone. “From a biological standpoint, having all the genetically pure bison in one park poses a real danger if disease or natural disaster strikes,” says Hank Fischer, NWF senior manager for wildlife-conflict resolution.

The Federation currently is working with partners to restore wild bison to areas where the species originally ranged, including Montana’s Charles M. Russell National Wildlife Refuge and Fort Peck Reservation, where Sioux and Assiniboine tribal members working with NWF and other groups released 61 of the Yellowstone animals in 2012. Through its grazing allotment retirement program, NWF also has secured thousands of acres of habitat for bison and other prairie wildlife adjacent to Yellowstone. 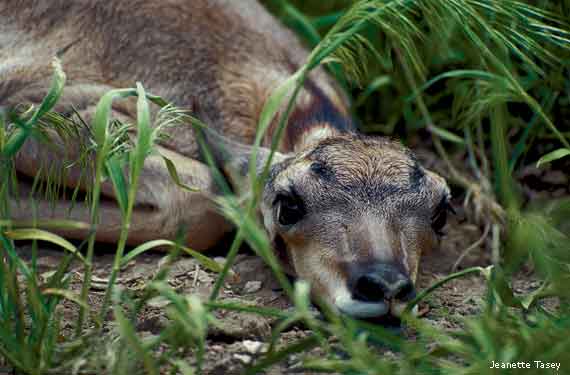 Jeanette Tasey came upon this newborn pronghorn two years ago while walking through a pasture near her home. “It was completely flattened out,” she says. “I didn’t think it was alive until it opened those huge eyes.” The Wyoming member quickly made this photo, then backed away.

Three decades earlier, the Federation took a stand to protect many of Wyoming’s half-million pronghorn by challenging a rancher who had put up 28 miles of fencing in the species’ crucial winter habitat, effectively locking the animals out of 100,000 adjacent acres of federally administered public lands. After thousands of pronghorn died as they crowded against the fence, NWF joined with its affiliate the Wyoming Wildlife Federation in a successful lawsuit that forced the rancher to remove the obstacle. NWF has since initiated dozens of actions to protect wildlife access to public lands.

Among other measures, the Federation has been pushing lawmakers and land managers to adopt policies that promote responsible energy development in Wyoming and Colorado—policies that would safeguard habitat not only for pronghorn but also sage grouse, raptors, mule deer and songbirds. And last year, with its affiliate the New Mexico Wildlife Federation, NWF helped secure national monument status for Rio Grande del Norte, protecting more than 240,000 acres of public lands that support pronghorn and many other species. 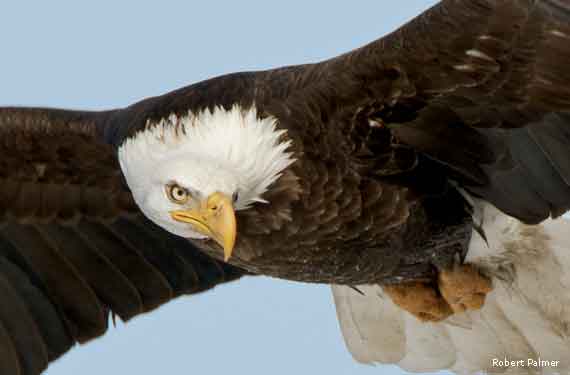 In the early 1970s, when fewer than 1,000 breeding pairs of bald eagles survived in the Lower 48, NWF initiated several projects to help the species recover, including acquiring hundreds of privately owned acres of Missouri River bottomland that provided winter habitat for more than 10 percent of those survivors. The land was then turned over to federal authorities to oversee.

The Federation also established an information clearinghouse that provided biologists and other resource experts a wide range of scientific data about the birds. Additionally, for more than a decade beginning in 1979, it coordinated an annual midwinter national bald eagle survey to determine the raptors’ numbers. (U.S. wildlife officials now administer the program.)

NWF has since led successful efforts to protect eagle habitat in the Upper Mississippi River Valley, the Chesapeake Bay and other regions, and it continues to press lawmakers to reduce emissions of toxic substances that are harming birds and other wildlife.

Today, nearly 10,000 nesting pairs of our national symbol range in the contiguous United States. Every winter, hundreds of them visit Utah’s Farmington Bay Waterfowl Management Area, where Colorado reader Robert Palmer made this dramatic image. “Eagles were eating carp close to shore,” he says. “This bird turned right in front of me as it flew past.” 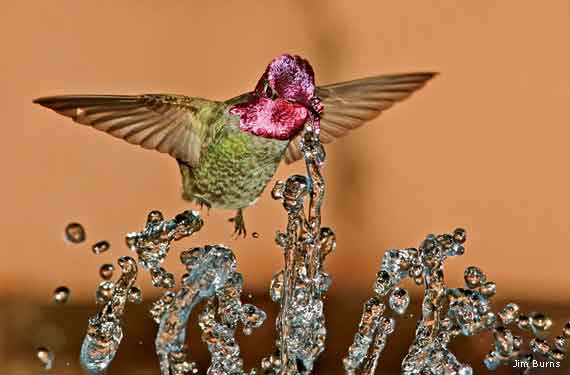 One of the benefits of living in Arizona, says reader Jim Burns, is being able to see hummingbirds in his yard all year long. He photographed this male Anna’s hummingbird drinking at a water bubbler beside the family’s backyard pond on a winter morning. “I went outside with my camera and got lucky,” says the Scottsdale resident, who later discovered how the bird’s colors reflected in the water droplets in his photo.

Backyard ponds and other water sources are among the features the Federation has been promoting for the past four decades to provide native wildlife with safe places to feed, find shelter and raise young. Since its inception in 1973, NWF’s Garden for Wildlife™ program has certified more than 150,000 private residences, public properties, schoolyards and entire communities throughout the country, creating hundreds of thousands of acres of habitat.

Do such areas really help wildlife? Researchers at the University of Wisconsin–Madison think so. In a recent study in Florida, they found that homes with certified habitats attracted—and sustained—nearly four times as many native bird, mammal and beneficial insect species as did nearby noncertified properties. 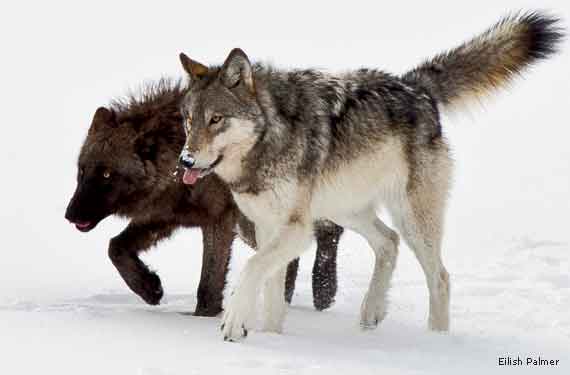 Working with its state affiliates in the region, NWF began campaigning in the late 1980s to restore the gray wolf to parts of its former habitat in the western United States. Such work finally began to pay off in 1995 when federal authorities transplanted 14 wolves from Canada to Yellowstone National Park as part of a plan to restore the park’s original natural ecological balance.

“Our efforts would not have been successful without strong public support,” says former NWF Western Staff Director Tom Dougherty, who served on the federal Yellowstone Wolf Committee and helped develop the plan. To build further support for the predators, the Federation also produced wolf-education materials for schools and films for television and theaters.

Today, nearly 90 of the animals range within the park, where Arkansas member Eilish Palmer photographed these two female yearlings in the Lamar Canyon pack during winter. “As I watched them,” she says, “I felt incredibly blessed to have had this amazing opportunity.”

Meanwhile, through its wildlife conflict–resolution program, the Federation has successfully protected more than a half-million acres of potential wolf habitat in the Northern Rockies region. It also is working with partners to secure several thousand additional acres in Arizona for the imperiled Mexican wolf, a subspecies of the gray wolf.