The Cat that Loves Water 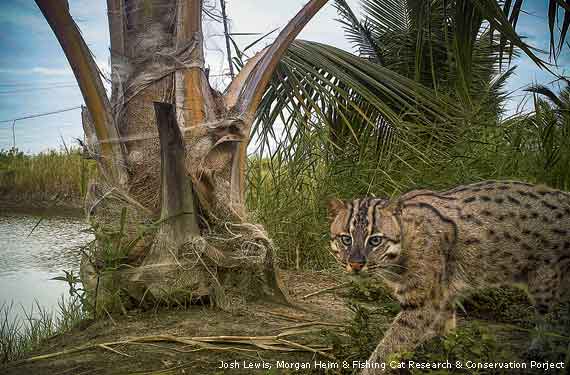 WE KNEW OUR INTENTION TO PHOTOGRAPH FISHING CATS in the wilds of Southeast Asia wouldn’t be easily accomplished. Other than National Geographic Society filmmakers Belinda Wright and Stanley Breeden, who took a few pictures of the cats in the 1990s, few people had seen, let alone photographed, the animals in the wild. In fact, since 2003, Thai biologist Passanan Cutter, founder of the Fishing Cat Research and Conservation Project, has observed only one free-roaming cat.

Science knows little about the fishing cat, which embraces a rather unfeline affinity for water. The animal lives in Southeast Asian swamps, where it swims and hunts fish. Weighing up to 30 pounds, it has adapted to its aquatic environment: It has webbed feet, short legs, tiny ears, spotted, almost water-resistant fur and a muscular tail it uses as a rudder. Jim Sanderson, a member of the IUCN Cat Specialist Group and founder of the Small Cat Conservation Alliance, believes the species numbers no more than 3,000 individuals, scattered mostly throughout Thailand, India, Bangladesh and Sri Lanka. Rampant habitat destruction, persecution and the bush-meat trade have caused an estimated decline in the cat’s numbers of more than 50 percent since those photos taken by Breeden and Wright in the 1990s.

Few people have made more headway toward understanding fishing cats than Cutter. After years scouring the wild, she found the animals roaming through Khao Daeng and Sam Roi Yod, a group of fishing villages a few hours south of Bangkok, Thailand. Villagers told her stories of fishing cats in their backyards, and a pair of captive cats proved the rumors true. She began making groundbreaking discoveries using camera traps to get unprecedented, if low-resolution, glimpses into the lives of these cats. She filmed a kitten fishing as well as an unsuccessful courtship attempt by a male.

My colleague, Joanna Nasar, and I first read about Cutter’s work in 2011. Determined to develop a new set of photographs and video, we contacted Cutter, and she agreed to give us some assistance. Looking for a fishing cat is much like looking for a moving needle in a poisonous, noisy, shifting haystack. Primarily nocturnal, fishing cats skulk through thick stands of grass taller than a man, the blades sharp enough to scratch skin. To top it off, their habitat teems with deadly king cobras. Nevertheless, where the fishing cat went, so did we, swatting at disease-carrying mosquitoes and ducking our guide’s flying machete.

On our initial trip to Thailand three years ago, Cutter and her team taught us how to think like a fishing cat. “You follow them for so long on camera traps, their tracks, you get to know them, their lives,” Cutter says. For weeks, we followed tracks, scat and our noses—a fishing cat’s musk rivals the aroma of a skunk.

Signs of the cat abounded, but we knew we’d have to do something special when Cutter told us we couldn’t stay out at night, a fishing cat’s active time. Shrimp farming had brought armies of migrant workers into the area, and dynamics among them could get a bit touchy. For women, roaming the marshes alone at night wasn’t safe, Cutter warned.

Like Cutter, we decided to use a camera trap, which takes a picture of any creature that passes through a motion-sensitive infrared beam, triggering the shutter. Setting up the camera could be something of an ordeal but, because someone might steal it, we had to take down the equipment every morning. Our gear was especially precious to us because we had only one camera trap in our toolkit.

Under the guidance of the research team, we staked a piece of chicken along a likely trail nearby and crossed our fingers. Rats, humidity, storms and battery failure presented all the usual challenges of camera trapping. Our greatest obstacle, though, would be the same one facing the fishing cat: development. For example, one morning, a few days into our efforts and much to our surprise, our camera showed us a photo of a fishing cat. The animal stood small in the frame, surrounded by darkness, one paw raised, sniffing a flash hidden behind a tree. Cutter told us this cat was new to the area. Less than a week later, bulldozers had removed that tree and excavated the land around it to make way for a shrimp farm.

Shrimp ranks as the most popular seafood in the United States, and Thailand is the largest supplier of farmed shrimp to U.S. markets. Throughout the course of our six-week photo expedition, bulldozers chased us out of trapping sites five times, shovels sometimes dripping clods of dirt above our heads as we scrambled to collect our gear. By the last week of our expedition, the only other cats we’d seen were one killed by a villager and another caged.

Our luck changed on a December night marked by a lunar eclipse. Joanna and I had left the camera at our final site for several days, risking theft for the last week of trapping but improving chances a cat would habituate to the gear. The morning after the eclipse, we waded through dew-covered grasses toward the site. Fresh scat and tracks littered the area. Something had taken the bait.

Flipping through the images, we at first saw only nontarget species. Then the large, round eyes of a cat Cutter’s team had nicknamed Rip Ear (below), so-called because of a torn ear, stared into the camera. From years of study, Rip Ear had become well known in this neck of the fish farm. The shot was blurry—he had stood too close to the lens—but a fishing cat had finally come out of the shadows, parading back and forth in front of the camera. Two more visits in those last few days gave us an array of images. Rip Ear had solidified his claim on fishing cat history. 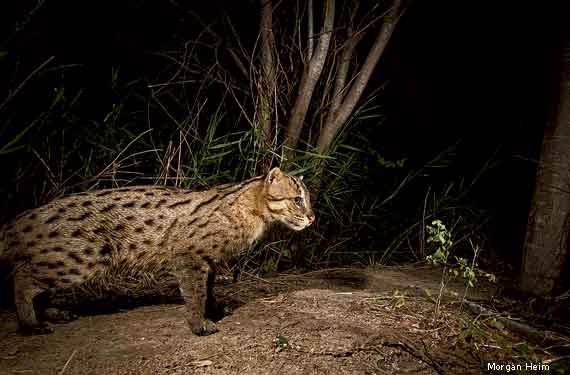 In summer 2013, I returned to Thailand. Rip Ear still roamed the fish farm, having survived a poacher’s snare, Cutter says, and several new battles, presumably with other territorial males. I photographed as much of Cutter’s work as possible and camera trapped two new cats, dubbed Khai Toon (Steamed Egg, a popular Thai name for pets) and Beak Gah (Crow’s Wing, named for spots on the cat’s shoulder that look like a crow’s wing) by students and farmers helping with the research. Involving local residents in the naming of the cats, Cutter says, is one of her most effective tools for developing a sense of stewardship in the community.

We’ve used this work to build partnerships with authorities in Thai reserves as such Khao Sam Roi Yot National Park and with organizations such as Felidae Conservation Fund and The WILD Foundation. By doing so, our dream is to someday help Cutter create a private conservation easement—a reserve where the cats can roam free of threats from development.

Meanwhile, the species fights on against shrimp farms, bulldozers and the chatter of daily life in a rapidly developing area. So long as it’s left a little room, Cutter says, there’s hope for the cat that loves water.
Morgan Heim is a Colorado-based multimedia journalist who specializes in science and conservation issues.

Camera Traps and Conservation: Gotcha!
Lions on Beetle Camera
On the Trail of Cougars
Cat on a Collision Course
NWF at Work: Endangered Species