No Swan Song for the Trumpeter 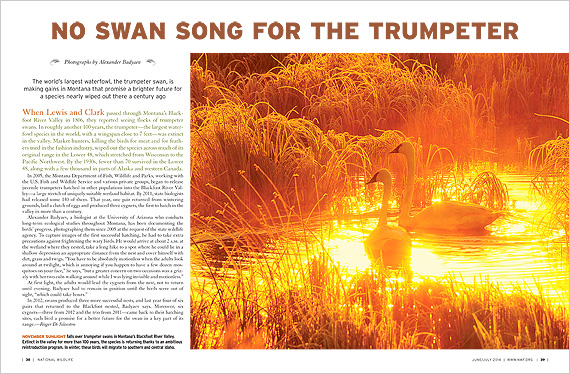 WHEN LEWIS AND CLARK passed through Montana’s Blackfoot River Valley in 1806, they reported seeing flocks of trumpeter swans. In roughly another 100 years, the trumpeter—the largest waterfowl species in the world, with a wingspan close to 7 feet—was extinct in the valley. Market hunters, killing the birds for meat and for feathers used in the fashion industry, wiped out the species across much of its original range in the Lower 48, which stretched from Wisconsin to the Pacific Northwest. By the 1930s, fewer than 70 survived in the Lower 48, along with a few thousand in parts of Alaska and western Canada.

In 2005, the Montana Department of Fish, Wildlife and Parks, working with the U.S. Fish and Wildlife Service and various private groups, began to release juvenile trumpeters hatched in other populations into the Blackfoot River Valley—a large stretch of uniquely suitable wetland habitat. By 2011, state biologists had released some 140 of them. That year, one pair returned from wintering grounds, laid a clutch of eggs and produced three cygnets, the first to hatch in the valley in more than a century.

Alexander Badyaev, a biologist at the University of Arizona who conducts long-term ecological studies throughout Montana, has been documenting the birds’ progress, photographing them since 2005 at the request of the state wildlife agency. To capture images of the first successful hatching, he had to take extra precautions against frightening the wary birds. He would arrive at about 2 a.m. at the wetland where they nested, take a long hike to a spot where he could lie in a shallow depression an appropriate distance from the nest and cover himself with dirt, grass and twigs. “You have to be absolutely motionless when the adults look around at twilight, which is annoying if you happen to have a few dozen mosquitoes on your face,” he says, “but a greater concern on two occasions was a grizzly with her two cubs walking around while I was lying invisible and motionless.” At first light, the adults would lead the cygnets from the nest, not to return until evening. Badyaev had to remain in position until the birds were out of sight, “which could take hours.”

In 2012, swans produced three more successful nests, and last year four of six pairs that returned to the Blackfoot nested, Badyaev says. Moreover, six cygnets—three from 2012 and the trio from 2011—came back to their hatching sites, each bird a promise for a better future for the swan in a key part of its range.

The takeoff of this reintroduced juvenile swan, outfitted with a bright, numbered neck collar to allow easy tracking, was captured by time-lapse photography. “These heavy birds need very long water runways to get airborne,” Badyaev says, “often running on water for up to 100 yards with an unmistakable thundering sound that reverberates for miles through mountain valleys.” Long takeoffs and limited flight maneuverability make the swans susceptible to collisions with above-ground power lines near wetlands, now the main source of mortality for this species. Historically, their slow and low flight made them easy targets for market hunters.

Three-day-old swans from the first Blackfoot trumpeter nest in more than a century, photographed here for the first time, get ready for a new day. Young swans, called cygnets, can swim when less than 24 hours old, Badyaev says. However, their exceptional buoyancy keeps them from diving for food, so they depend for three or four months on their parents to dive and stir up enough debris to enable the cygnets to forage at the water’s surface. Trumpeters live for up to 25 years but typically do not mate until 5 to 7 years old. Even then, newly formed pairs stay together for at least two years before attempting to nest, and most pairs do not breed every year. Thus, building sustainable trumpeter populations requires multiyear conservation efforts. 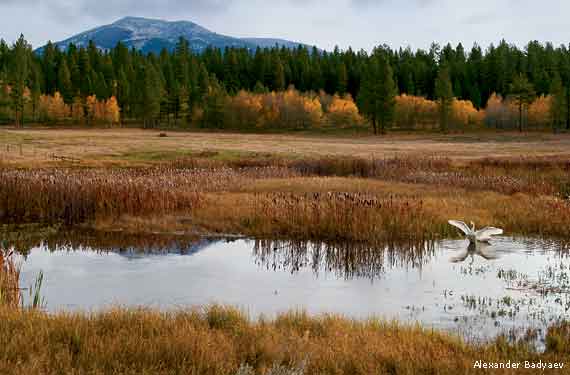 An adult trumpeter stretches its wings in a pond carved by glaciers thousands of years ago. A combination of retreating glaciers and rugged mountain ranges created thousands of such secluded lakes in the Blackfoot Valley, Badyaev says—shallow enough to enable swans to bottom feed yet large enough to facilitate long takeoffs. The species is named for its unique trumpetlike call, produced by an exceptionally elongated trachea. Echoes of trumpeter swans taking off en masse from forested lakes startled the first settlers in the West. Little by little the unforgettable sight and sound of trumpeter flocks is again becoming a reality in western Montana’s glacial ponds.

NWF in Action: Protecting Wetlands for Wildlife
For more than 25 years, NWF has worked to restore the famed Florida Everglades, home to more than 68 threatened and endangered species, and has advocated successfully for the Comprehensive Everglades Restoration Plan, the largest environmental restoration project in history. The Federation also is working to ensure that the U.S. Congress does not authorize new policies that would weaken wetland protections under the National Environmental Policy Act and is advocating for an Environmental Protection Agency rule that would clarify which bodies of water are protected under the Clean Water Act, a decision that could affect the water supplies of 117 million Americans.

In Alaska, NWF and its state affiliate, the Renewable Resources Coalition, are fighting to keep a proposed open-pit copper and gold mine out of Bristol Bay, which would result in the permanent storage of some 10 billion tons of waste materials in an area critical to salmon, Alaska brown bears and millions of birds as well as to a fishing industry worth an estimated $1.5 billion in annual revenue.

NWF’s three years of work on the federal Farm Bill passed by Congress last January includes measures for stopping erosion and protecting wildlife habitat, including wetlands. “When we started the process, conservation compliance was a fringe issue with very little chance of passage,” says Julie Sibbing, NWF senior director of Agriculture and Forestry Programs. “Yet thanks to support from farmers, sportsmen, conservationists and congressional champions, we managed to elevate this issue and win strong bipartisan support for this important provision in both the House and Senate.”