A Tale of Two Cranes

Threatened by water diversions, both sandhill and whooping cranes have benefited from decades of work by NWF and its partners 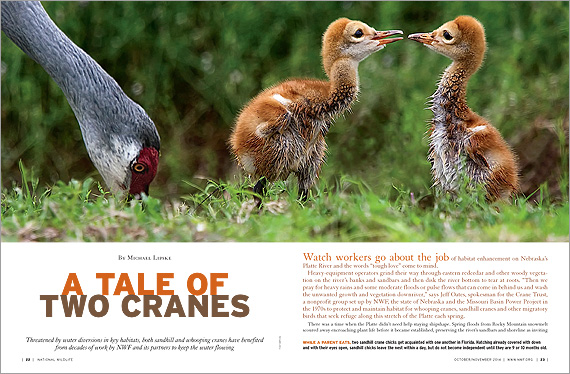 WATCH WORKERS GO ABOUT THE JOB OF HABITAT ENHANCEMENT on Nebraska’s Platte River and the words “tough love” come to mind.

Heavy-equipment operators grind their way through eastern redcedar and other woody vegetation on the river’s banks and sandbars and then disk the river bottom to tear at roots. “Then we pray for heavy rains and some moderate floods or pulse flows that can come in behind us and wash the unwanted growth and vegetation downriver,” says Jeff Oates, spokesman for the Crane Trust, a nonprofit group set up by NWF, the state of Nebraska and the Missouri Basin Power Project in the 1970s to protect and maintain habitat for whooping cranes, sandhill cranes and other migratory birds that seek refuge along this stretch of the Platte each spring.

There was a time when the Platte didn’t need help staying shipshape. Spring floods from Rocky Mountain snowmelt scoured away encroaching plant life before it became established, preserving the river’s sandbars and shoreline as inviting habitat for migratory cranes and other birds. But as dams and other water-control structures went up along the river and its tributaries during the past century, the Platte’s power was harnessed for irrigation, electricity generation, drinking water and other uses. Overall flow in the Central Platte shrank by nearly 70 percent, and human intervention became necessary to mitigate the effects of man’s engineering marvels upstream. 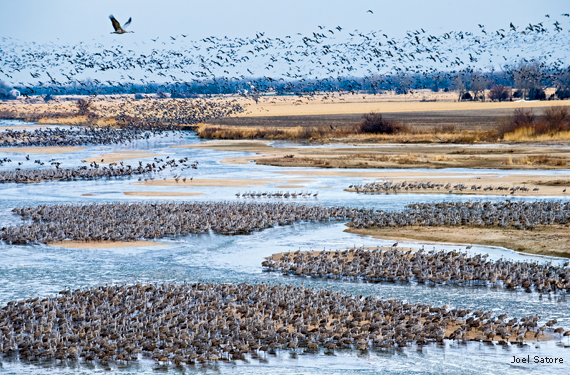 Like millions of other migrants moving north in the Central Flyway, sandhill and whooping cranes depend on the Platte as a critical stopover to feed and rest. From late February through mid-April, some 600,000 sandhills visit trust-managed lands along the Big Bend (above) reach of the river in south-central Nebraska. Roosting on vegetation-free sandbars at night (where they are relatively safe from coyotes and other predators), the cranes fatten on waste corn in surrounding farm fields during the day. This annual visitation by the long-legged, gray birds is the world’s largest concentration of cranes and one of the great wildlife spectacles of North America.

Not long after sandhills arrive, family groups and bonded pairs of whooping cranes show up along the Platte. Topping out at around 5 feet, whoopers are the continent’s tallest bird—with a wingspan of more than 7 feet and a nearly yard-long stride. Despite those spectacular dimensions, a whooper weighs no more than a large house cat.

Whooping cranes are also one of North America’s rarest birds. Decades of recovery efforts have brought the species back from a low of 15 individuals in 1941 to around 500 birds today. The roughly 300 whoopers that soar across Nebraska skies each spring and fall make up the species’ only remaining natural migratory population.

Differing vastly in overall numbers, whooping cranes and their somewhat shorter sandhill cousins have one thing in common. Both need help getting an adequate supply of freshwater, an increasingly scarce commodity in the West. For the past four decades, NWF and its state affiliates and other partners have been working hard to ensure that the cranes get the water they need to survive.

Resources for Cranes Drying Up 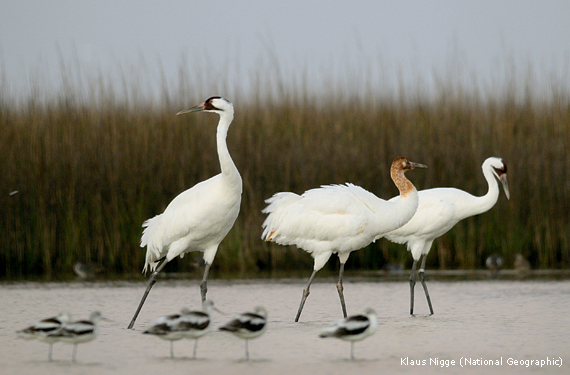 For whoopers, water woes begin well south of the Platte River. The statuesque cranes winter in salt marshes within Aransas National Wildlife Refuge on the Gulf Coast of Texas. “The big issue for Aransas in recent years has been drought,” says Myron Hess, counsel and manager of Texas water programs for NWF. The punishing, record-setting droughts Texans have endured of late have meant less rain falling on the whooper’s winter habitat and less water flowing into the estuary system and rivers that support the refuge—a situation worsened by increasing water withdrawals by people.

Diminished freshwater reaching the coastal refuge translates into increased salinity in the water flowing through Aransas marshes. Too much salinity results in smaller populations of blue crabs, the whooper equivalent of energy bars. A single hungry crane wolfs down as many as 80 protein-rich blue crabs in a day. During the bone-dry Texas winter of 2008-2009, conditions grew dire for both crabs and cranes at Aransas. Starving whoopers became emaciated and exhibited stress behavior; at least 23 of the endangered birds died on the refuge. Since then, the number of cranes appears to be increasing slowly but drought conditions have returned.

Freshwater for marshes inhabited by wintering whooping cranes comes primarily from the Guadalupe and San Antonio Rivers. During droughts, much of the rivers’ water arises from two large springs fed by the Edwards Aquifer, a groundwater system that also provides drinking water for San Antonio, the seventh largest city in the United States. For close to a decade, Hess has played a key role in efforts to hammer out a plan to limit pumping of aquifer water (by San Antonio and other cities and for agriculture and industry) during droughts as part of efforts to protect spring-flow-dependent threatened and endangered species. The impetus for the Edwards Aquifer Habitat Conservation Plan developed by NWF and other stakeholders—and approved last year—was a federal court order compelling Texas to protect the Texas blind salamander and other endangered animals that depend on aquifer springs.

Protecting endangered species upstream also benefits cranes at Aransas. “Unless it is intercepted along the way, every additional drop of water that comes out of those springs and into the rivers is more water that’s going to reach the coast and the whooping cranes,” Hess says. 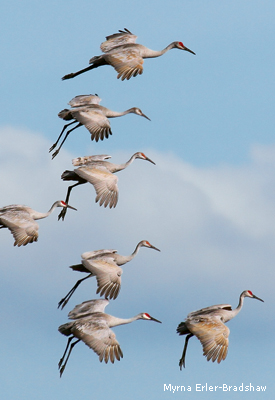 Yet guaranteeing adequate water for wildlife in the Guadalupe and other Texas rivers remains a daunting challenge. “Each year the [state’s human] population jumps, and we use more and more water,” says NWF water-resources scientist Norman Johns, also based in Texas. “Almost every entity in Texas that sells water or manages water is trying to figure out how to get more; it’s like trying to squeeze blood from a turnip.”

Midway up the Central Flyway, maintaining habitat for cranes along the Platte has proved equally arduous.

The Crane Trust was born out of settlement of a lawsuit, launched in the late 1970s by NWF and its affiliate Nebraska Wildlife Federation, to protect water flow in the river. The settlement allowed construction of Grayrocks Dam (part of a huge power project in Wyoming) to go forward on a tributary to the North Platte River, but provided $7.5 million to underwrite the trust’s acquisition and preservation of habitat for cranes and other migratory birds. Through direct ownership and conservation easements, the organization today manages some 10,000 acres scattered along 40 miles of the Platte River.

As at Aransas, one of the biggest jobs for crane protectors along the Platte remains ensuring enough water. Success is usually years in the making. Beginning in 1997, NWF and Nebraska Wildlife embarked on a 10-year process of negotiations with state and federal government officials and a range of Platte River water users to craft what eventually became the Platte River Recovery Implementation Program.

Developing the program was supposed to take just three years. “It was hard for conservationists to remain optimistic,” recalls NWF board member and former Federation staff member Tom Dougherty, who has worked on Platte River issues for more than three decades. “But we stayed in the fight, as we had for the 30 years before that, because the river is vital to cranes and other wildlife. Nearly all the sandhill cranes in North America stop along the Platte during migration. We couldn’t let that region collapse.”

Now under way, the Platte River program (a joint effort by Nebraska, Colorado, Wyoming and the U.S. Department of Interior) has resulted in acquisition of 10,000 additional acres of riverine habitat and promises to provide 130,000 to 150,000 acre-feet of water annually to address river-flow needs. The water-delivery portion of the 13-year program is behind schedule, “which is a growing frustration of mine,” says Dougherty. “No matter how much habitat is acquired, the program will be a failure if we don’t get enough water into the system.”

Duane Hovorka, Nebraska Wildlife executive director, is cautiously optimistic—at least about the river’s short-term prospects. “The three states and the federal government made a commitment to not damage the river further. The program isn’t a silver bullet, but it’s certainly trying to make things better.” Will better be enough? A native Nebraskan, Hovorka says climate models forecast a drier, hotter future for his state: “If that’s the case, and you have more evaporation and more need for water for crops, that’s going to put additional demand on all of our rivers and water resources. So long-term, it does look kind of scary.”

What constitutes long-term for humans is the blink of an eye for species like cranes. Fossil records indicate cranes were visiting what is now Nebraska more than 9 million years ago, long before the Platte River first meandered across the region.

Following an ancient migration cycle, sandhills leave the Platte as summer beckons and fly to breeding grounds in the northern United States, Canada and northeastern Siberia. The entire migratory population of whooping cranes, meanwhile, nests among the marshes and bogs of Canada’s Wood Buffalo National Park in northeastern Alberta and the southern Northwest Territories.

Cranes of both species mate for life, and a breeding pair typically rears only one offspring each summer. Then, as the days begin to shorten, sandhills and whoopers rise into the sky to retrace their journey, soaring southward to where the water is—for now.

In 2013, the Crane Trust began setting out cameras in wet meadows visited by sandhills along the Platte River. Recording a photo every 15 minutes around the clock, the project is a way to observe crane behavior and to assess how the birds respond to different habitat-management practices. In addition, cameras set out in the river itself this spring captured infrared nighttime images of roosting sandhill cranes—sometimes standing on one leg with their heads tucked under their wings—but also scenes of cranes “being quite active and social in the middle of the night,” says Crane Trust Director of Science Mary Harner. “We’re looking at things like, are they more active on full-moon nights or warmer nights” as well as what “might be disturbing them on the roost and how they respond to changing water levels.”

Find out more about efforts by the Federation and its partners to ensure adequate supplies of freshwater for cranes and other wildlife by visiting the following sites:
• NWF’s Texas Living Waters Project: www.nwf.org/TexasLivingWaters
• NWF’s Platte River Programs: www.nwf.org/Platte
• Nebraska Wildlife Federation: www.NebraskaWildlife.org
• The Crane Trust: www.cranetrust.org