Ferreting Out a Safe Harbor

Under a unique federal program, a Colorado ranch provides a home for one of North America’s most critically endangered mammals 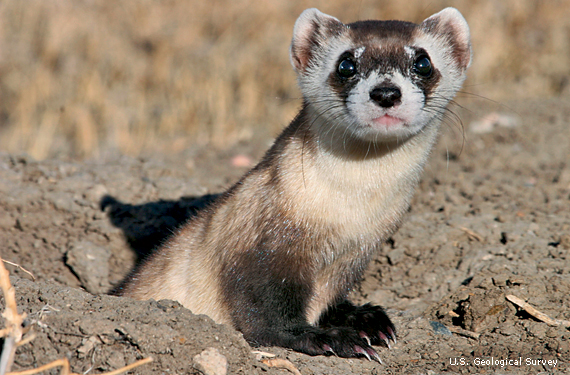 THE WORDS "ENDANGERED SPECIES" can strike dread in the hearts of western ranchers who fear losing access to public rangeland as governments step up efforts to save creatures on the brink. In recent decades, the West has been the setting for so-called “sagebrush rebellions”—protests by landowners angry about public-land restrictions that are designed to safeguard wildlife or repair environmental damage.

Then there are Gary and Georgia Walker. These southern Colorado ranchers have actually welcomed the black-footed ferret—one of North America’s rarest mammals—onto their private land, even though the 55 captive-bred ferrets released last October on their 65,000-acre cattle ranch northwest of Pueblo didn’t come alone. A whole passel of state and federal employees have become regular visitors to the property to keep tabs on the ferrets’ progress.

A Win-Win for Ranchers and Ferrets

The Walkers are the first participants in the federal Safe Harbor Agreement for ferrets, launched last year to encourage more private landowners, including tribes, to provide habitat to improve the endangered species’ chances of recovery. Through the program, the U.S. Fish and Wildlife Service (FWS) wants to increase the number of ferrets in the wild to about 3,000, potentially leading to the animal’s removal from the U.S. Endangered Species List.

The lithe, little weasel with a black facial mask was nearly wiped out as much of its prairie habitat was developed and people killed prairie dogs, its primary food source. The ferret was thought to be extinct until a small colony of the animals was discovered in 1981 in northwestern Wyoming. Since then, more than 7,000 ferrets have been born at six captive-breeding facilities in the United States and Canada. Several thousand of them have been released during the past 20 years. Today, the wild population is estimated at several hundred across sites in eight U.S. states, Canada and Mexico.

Under the Safe Harbor Agreement, landowners willing to help restore ferrets sign a pact saying they and their neighbors can continue routine operations and won’t get in trouble if some of the endangered animals are inadvertently killed. Some financial assistance is available to participants for related costs, such as loss of forage on land managed to maintain prairie dog colonies. Landowners also can bow out of the arrangement at any time, at which point FWS would have the opportunity to relocate the ferrets.

For the Walkers, the program is a “win-win” proposition, giving them the opportunity to realize a longtime dream and providing federal scientists with more land for ferrets. The couple began to consider adding the endangered species to their landscape about 20 years ago as the area’s prairie dog population exploded. “Cattle will eat grass down to one inch and not hurt the short grasses,” Gary says. “Prairie dogs will strip it clear to the top of the ground. Then they run out of it, so they start expanding and moving.” He and Georgia wanted to rein in the prairie dogs on their land without having to shoot or poison the animals. Essentially, they wanted to work with nature, not against it.

“Our caring about the environment did not start with the ferret release in October 2013,” Gary says. “We’ve given up trips and sacrificed by not running as many cattle as we could have. We’ve eliminated erosion, built stock ponds and put out 12 solar-powered water pumps. Wildlife have water during the winter.”

The Walkers have seen deer and elk herds, bald and golden eagles, mountain plovers, bobcats and hundreds of pronghorn on the ranch. For their efforts, the couple was honored with the Sand County Foundation’s and Colorado Cattlemen’s Association’s 2014 Colorado Leopold Conservation Award.

Through the years, the Walkers have received encouragement and advice from their friend and neighbor Tom Warren, who headed environmental programs at the adjacent Fort Carson U.S. Army post. A wildlife biologist, Warren is former chair of the NWF Board of Directors and NWF Action Fund Board. He worked with The Nature Conservancy and the Walkers on placing 21,888 acres of the ranch in conservation easements.

Now Warren and staff at FWS, Colorado Parks and Wildlife, U.S. Natural Resources Conservation Service and other participating agencies hope more landowners will sign up for the Safe Harbor program. “Everyone’s looking at this reintroduction as the genesis of what can be,” Warren says.

NWF has promoted and worked with state and federal agencies on restoring black-footed ferrets ever since the animals were rediscovered in 1981. “I think there’s a really good chance that we can recover this species, but there aren’t enough prairie dog colonies on federal land,” says Tom Dougherty, a former NWF staff member and current Federation board member who for years served on an advisory committee for the ferret recovery team. “Getting buy-in from private landowners will greatly improve the chances for recovering the species and help restore an important component of the prairie ecosystem,” adds Ann Morgan, NWF’s Rocky Mountain Regional Center executive director and current committee member.

In Colorado, many prairie dog populations are located on the eastern plains, which largely are made up of privately owned property with some state and federal lands mixed in. In those areas and elsewhere, wildlife biologists need flexibility to stay ahead of two big threats to prairie dogs and ferrets: drought and sylvatic plague, a form of bubonic plague transmitted by fleas.

Support for the reintroduction effort by the Colorado Cattlemen’s Association has been key to launching of the Safe Harbor program, says Pete Gober, the Colorado-based coordinator of the FWS ferret recovery plan. The group endorsed a state law authorizing release of the animals on the property of consenting owners. Another state law, passed this year, will permit Fort Collins to pursue becoming the first municipal reintroduction site by turning ferrets loose on city open spaces.

Meanwhile, the ferrets appear to be spreading out on the Walker ranch, though biologists need more time to determine the animals’ survival rate and whether any young are born. As research continues, the Walkers already are receptive to another release of ferrets, possibly this fall. “We’re really hoping for a sustainable population here,” Gary says. “It’s been enjoyable. It’s also intrusive, but because the benefit is greater than the sacrifice, we’re willing to continue. We firmly believe in the program.”

Learn more about other Federation efforts around the country to restore and protect endangered and threatened species.


Judith Kohler, NWF’s land communications manager based in Colorado, visited the Walker ranch to report for this article.

Getting to Know North America's Rarest Mammal
A Culture of Coexistence
Disappearing Grasslands are No Joke
Black-footed Ferrets: Will They be the Comeback Kits?
Return of the Mighty Pygmy Rabbit