The Deepening Mystery of Moose Decline 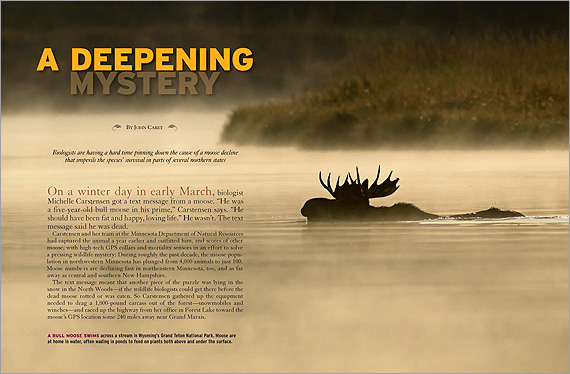 ON A WINTER DAY IN EARLY MARCH, biologist Michelle Carstensen got a text message from a moose. “He was a five-year-old bull moose in his prime,” Carstensen says. “He should have been fat and happy, loving life.” He wasn’t. The text message said he was dead.

Carstensen and her team at the Minnesota Department of Natural Resources had captured the animal a year earlier and outfitted him, and scores of other moose, with high-tech GPS collars and mortality sensors in an effort to solve a pressing wildlife mystery: During roughly the past decade, the moose population in northwestern Minnesota has plunged from 4,000 animals to just 100. Moose numbers are declining fast in northeastern Minnesota, too, and as far away as central and southern New Hampshire.

The text message meant that another piece of the puzzle was lying in the snow in the North Woods—if the wildlife biologists could get there before the dead moose rotted or was eaten. So Carstensen gathered up the equipment needed to drag a 1,000-pound carcass out of the forest—snowmobiles and winches—and raced up the highway from her office in Forest Lake toward the moose’s GPS location some 240 miles away near Grand Marais.

In the woods, the snow was too deep for snowmobiles, so Carstensen and her colleague snowshoed in from the nearest road. They had suspected that wolves might already be dining, since the motion-sensitive mortality detector kept going on and off, as if something were tugging at the corpse. Sure enough, when Carstensen got close and gave a wolf howl, “the wolves all howled back,” she says.

By the time the team reached the moose, the wolf pack had moved away. The kill proved to be an enigma. “A bull like that should be able to fight wolves off,” Carstensen says. A rank smell was one clue as to why it couldn’t. The bull had a rotted liver, caused by a secondary infection and a parasite called a liver fluke. The biologists’ notes also showed that the animal had been behaving abnormally—walking in circles—when the team radio-collared it, strong evidence of an infection from a parasitic brain worm that can weaken and kill moose.

The Tiny Taking Down the Mighty 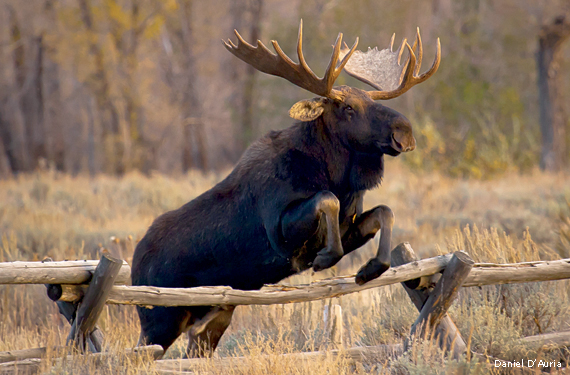 Of course, parasites and wolves have always been around. So “something must have changed in the last decade and a half that makes the moose more susceptible,” Carstensen says. Climate change is a prime suspect, since Minnesota has experienced a series of warmer winters—but many scientists don’t think temperatures have warmed fast enough to cause such a steep decline. Adding to the perplexity is the fact that moose are doing just fine in Quebec, Ontario, Alaska and Maine. The thriving population in Maine is especially important, because the state is home to an estimated 60,000 to 70,000 moose, more than the other lower 48 states combined. “It’s a really mixed bag across Canada and the U.S.,” says Lee Kantar, the moose biologist for Maine. “You can’t have Quebec right next to us with increasing moose populations and have this talk about doom and gloom.”

Studies spawned by alarm over the U.S. declines are seeking answers to the problem. In early 2013, Minnesota biologists outfitted 110 adult moose with GPS collars and mortality sensors—and a year later added 36 more to replace those that already had died. They also put collars on 34 calves in May 2013. In a similar effort, New Hampshire and Maine biologist radio-collared 103 moose, half of them calves, in January 2014. The devices not only track locations, they also send messages to researchers when an animal may be dead, making it possible for the biologists to race in to collect carcasses or samples for analysis. Other studies are examining moose habitat to figure out if the animals are finding sufficient food and cover. “The great thing is that moose are finally getting the attention that they needed,” says Peter Pekins, professor of wildlife ecology at the University of New Hampshire.

By March 2014, only 9 of the 34 Minnesota radio-collared calves were still alive. “That was a surprise,” says Glenn DelGiudice, moose researcher for the Minnesota Department of Natural Resources. “The mortality rate was much higher than we expected.” Wolves got most of them, while bears killed a few.

The adults in the study haven’t fared well either, with more than a fifth dying in just the first year. Half succumbed to infections and other ills. The others were brought down by wolves, but like the five-year old bull, many probably had underlying health problems. “To me, it seems to be a shotgun of causes,” Carstensen says.

To some researchers, however, one cause looms largest—Parelaphostrongylus tenuis, or brain worm. This tiny parasite coexists happily with white-tailed deer, living in the connective tissue around the brain and spinal cord (or the meninges). In a complex life cycle, the worms spew out eggs that hatch in the deer’s lungs. The deer coughs up, swallows and excretes the worm larvae, which find homes in snails and slugs. Other deer get infected eating the snails accidently while nibbling on forest-floor greenery. “Nearly 90 percent of deer get infected in their first two years of life,” explains Murray Lankester, retired biologist from Lakehead University in Thunder Bay, Ontario, who has studied the effects of P. tenuis extensively. In areas with lots of deer, moose pick up the worm, too.

That’s a big problem for the moose. “The brain worm just travels around looking for a white-tail deer brain,” says Rolf Peterson, who has been studying moose and wolves on Michigan’s Isle Royale for more than 40 years. Some moose seem able to fight off the parasite, but others start walking in circles or just stand around until they become prey or die.

Historically, deep winter snow kept deer out of moose country, so the animals didn’t mix much. But a series of warm winters, like those the Northeast and Midwest have experienced recently, can allow deer—and brain worms—to move north into the boreal forest. It has happened before, Lankester believes, causing moose populations to crash in the 1940s and 1950s in Nova Scotia, New Brunswick and Minnesota. And it could be happening now. “We think the current moose die-off is just what we would predict,” he says. Consider that on Lake Superior’s Isle Royale, which has no deer (and thus no brain worm), the trend is in the opposite direction. Moose numbers are soaring, after the collapse of the local wolf population from inbreeding, so much so that island moose threaten to wipe out their main food source, the balsam fir, demonstrating why healthy wolves are crucial to holding prey in check.

Where brain worm is a major culprit, there is a way to protect moose, as a moose-management advisory committee that Peterson co-chaired described. “We recommended hammering deer as much as possible, through any means possible,” Peterson says.

However, brain worm is clearly not the only danger, especially outside of Minnesota. New Hampshire has lots of deer, for instance, but moose avoid overlap by retreating to higher elevations. Moreover, acid rain on soils with little buffering capacity seems to have taken a severe toll on the snails that harbor the worm. “I was astonished at how their numbers have dropped,” says Kristine Rines, moose project leader for New Hampshire’s Fish and Game Department. “That could be a factor in moose hanging on in southern New Hampshire.” 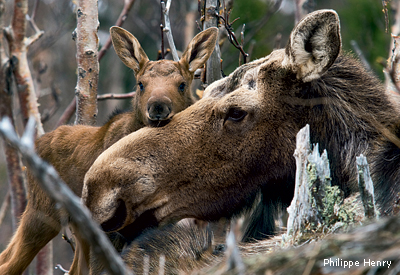 The leading threat in New Hampshire, where the moose population has declined as much as 40 percent in some areas during the past three years, seems to be the winter tick. Warmer winters and less snow cover mean that more ticks survive to lay eggs when they finish feeding on a moose and drop to the ground. As a result, tick numbers are up. “The ticks are literally carpeting these animals’ bodies like shingles on a roof,” Rines says. “It’s enough to make you run screaming through the woods.”

Larval ticks climb onto moose as the animals brush by bushes and trees in the fall and then feed through the winter while growing into adults. Rines, Pekins and others have counted more than 100,000 ticks on a single moose. With that many insects, the moose can’t eat enough to keep replacing the blood the ticks suck out and end up cannibalizing their own muscles for protein before dying. When the researchers find the carcasses, “these animals all have full stomachs of what we would describe as good browse,” Pekins says. “We believe they simply run out of gas, or in this case, the protein required to counteract blood loss. The tick loads seem like they couldn’t be much higher. It’s a very, very sad story.”

It could get even sadder. Both the brain worm and the tick problems are expected to get worse as global climate continues to warm. Milder winters with less snow cover enable more deer to move into moose habitat. And little or no snow in spring, when engorged adult ticks fall off moose to lay eggs, boosts tick survival. Ticks, though, are unlikely to wipe out moose entirely, because the insects prey on few other hosts. As moose numbers drop, so will tick numbers, giving moose a chance to bounce back. 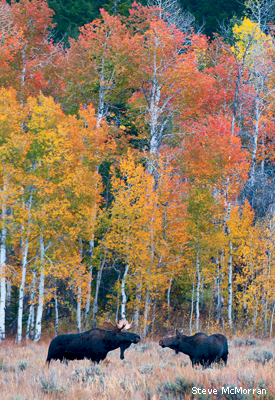 Wildlife managers also have other levers to pull to give moose a boost. They can reduce the white-tailed deer population in some areas or create more browse and prime moose habitat by cutting openings in the forest. In the late 1970s, for instance, the spruce budworm, a native species that experiences periodic outbreaks as part of a natural cycle, cut a devastating swath through Maine’s forest, and timber companies stepped up logging to salvage the timber. “That created moose nirvana,” Pekins says. “A population explosion of moose swept out of Maine into New Hampshire, Vermont and even a little bit of Massachusetts.” It could happen again. Another spruce budworm infestation is knocking on Maine’s northern door. “Maybe this is how we will grow more moose again,” Pekins says.

And so the mystery of the disappearing moose will not come to a simple conclusion. The moose’s prospects depend on complex and interacting ecological factors and relationships, and the animal’s numbers will rise and fall as those factors evolve. With climate change bringing increasingly mild winters, the species could disappear in some regions, wiped out by a triple whammy of parasites, pests and predators. But this massive symbol of the North Woods likely will continue to survive, even thrive, in other regions—and the new research will lay the groundwork for making that happen.

NWF in Action: Making the Most of America’s Moose

NWF is working to reduce carbon pollution and to win federal support for clean energy, two measures that will help reduce global warming, which some biologists believe is behind the decline of moose in parts of Minnesota. NWF also is working for the protection of forested moose habitat in the northeastern United States and parts of Canada. Safeguarding these woodlands also helps the survival of other creatures, including martins, fishers, black bears and lynx. Federation efforts to protect wildlife corridors in the Northeast also improve forest habitat for moose and other species. For more information, visit www.nwf.org/What-We-Do.