Renowned children’s author gives the gift of reading and nature 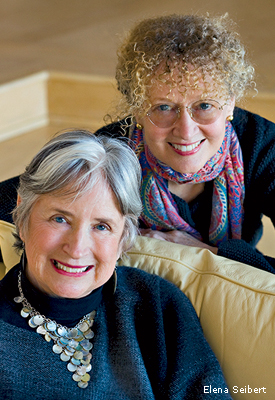 FOR MORE THAN TWO DECADES, best-selling author Mary Pope Osborne has empowered youth with knowledge about the wonders of the natural world to encourage them to explore it. Her Magic Tree House series transports characters Jack and Annie to places such as the Amazon and Africa, where they often try to help the animals that live there.

She added the companion Fact Tracker books to the series, written by her sister, Natalie Pope Boyce (left in photo, with Osborne), and lesson plans because Osborne says, “If you can bring to a kid the reality of a cobra or a gorilla in a mountain rainforest, it is something far greater than the imagination can create.”

Through her Gift of Books program she initiated in 2012, Osborne has donated hundreds of thousands of Magic Tree House books to underserved students. She chooses also to support NWF, she says, because “there is no more precious cause than that of preserving nature. We humans have to guard our wildlife. It’s never been more important.”

To learn how you can support NWF, go to www.nwf.org/donate.