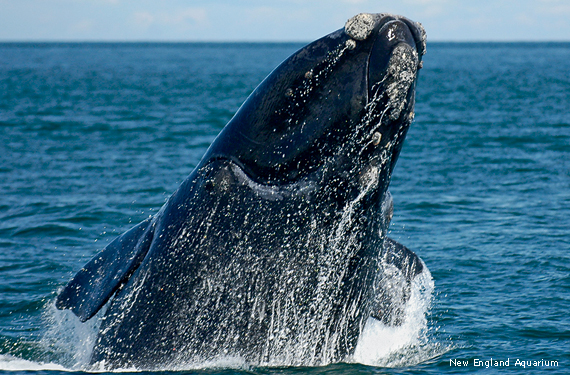 THE BENEFITS OF OFFSHORE WIND POWER may seem obvious above the water: renewable energy that can help reduce the environmental impacts of climate change. But recent agreements that NWF and its partners brokered with East Coast offshore wind developers also will aid wildlife below the surface.

Three closely related right whale species occur in the Atlantic, Pacific and Southern Oceans, of which the North Pacific and North Atlantic right whales are endangered. Historically, whalers named them the “right” whales because their slow pace made them easy to catch and their carcasses float. Moreover, blubber from one right whale could yield 70 barrels of oil, while its baleen (comblike jaw plates that filter food from water) was valued for making corset stays and buggy whips. Whaling reduced North Atlantic right whale numbers from as many as 10,000 in the 1500s to perhaps fewer than 100 when the animals were protected from hunting in 1935. Although the population has increased slightly in recent years, only about 500 of these whales now exist.

With so much human use of the waters North Atlantic right whales frequent, New England Aquarium While banning all offshore activity in right whale habitat isn’t a workable solution, “these vulnerable and sensitive creatures need our protection,” says Catherine Bowes, NWF senior manager for climate and energy. “What’s exciting is that these offshore wind industry leaders listened in earnest to our concerns and agreed to take steps to protect the whales’ welfare.”

“We worked hard to strike a balance between protecting the right whale and protecting our construction schedule,” says Aileen Kenney, Deepwater Wind’s vice president for permitting and environmental affairs. The companies agreed to limit activities during the whales’ migrations, when they travel from Canada and New England to Georgia and Florida to calve during December to March and then return north by summer.

“The big ‘give’ on our part is that we agreed to restrict the times of year when we can do offshore pile driving,” says Kenney. As underwater noise pollution can potentially interfere with the whales’ communications, the wind energy companies will not drive piling or use sonic pings when they are in the vicinity.

Another key provision of the pacts is a limit on the companies’ vessels speed to avoid ship-whale collisions. Such accidents can be calamitous for both parties, as a full-grown right whale can weigh as much as 60 tons and measure 45 to 55 feet long.

While Europe has some 2,000 offshore wind turbines already at work, the United States has none. “Offshore wind is our largest untapped renewable energy source,” says Bowes. “Its potential as an important climate-change solution is massive.”