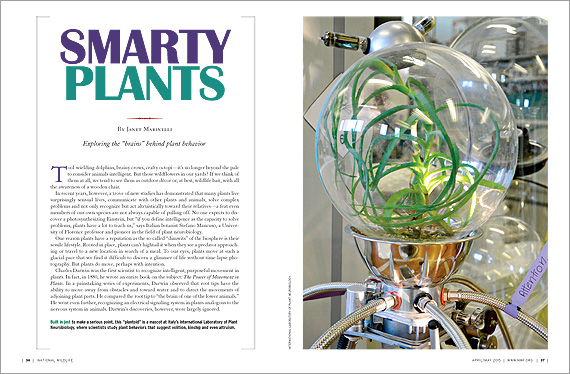 TOOL-WIELDING DOLPHINS, brainy crows, crafty octopi—it’s no longer beyond the pale to consider animals intelligent. But those wildflowers in our yards? If we think of them at all, we tend to see them as outdoor décor or, at best, wildlife bait, with all the awareness of a wooden chair.

In recent years, however, a trove of new studies has demonstrated that many plants live surprisingly sensual lives, communicate with other plants and animals, solve complex problems and not only recognize but act altruistically toward their relatives—a feat even members of our own species are not always capable of pulling off. No one expects to discover a photosynthesizing Einstein, but “if you define intelligence as the capacity to solve problems, plants have a lot to teach us,” says Italian botanist Stefano Mancuso, a University of Florence professor and pioneer in the field of plant neurobiology.

One reason plants have a reputation as the so-called “dimwits” of the biosphere is their sessile lifestyle. Rooted in place, plants can’t hightail it when they see a predator approaching or travel to a new location in search of a meal. To our eyes, plants move at such a glacial pace that we find it difficult to discern a glimmer of life without time-lapse photography. But plants do move, perhaps with intention.

Charles Darwin was the first scientist to recognize intelligent, purposeful movement in plants. In fact, in 1880, he wrote an entire book on the subject: The Power of Movement in Plants. In a painstaking series of experiments, Darwin observed that root tips have the ability to move away from obstacles and toward water and to direct the movements of adjoining plant parts. He compared the root tip to “the brain of one of the lower animals.” He went even further, recognizing an electrical signaling system in plants analogous to the nervous system in animals. Darwin’s discoveries, however, were largely ignored.

More than a century later, most experts were still refusing to think of plants as intelligent life-forms. So when, in 2005, Mancuso and a group of international scientists established the Society for Plant Neurobiology to study sophisticated behavior in plants, critics howled that the group had gone too far. Though acknowledging that plants do have electrical signaling systems, the critics argued that plants don’t have neurons, let alone brains, so the term “plant neurobiology” was nonsense.

Yet Mancuso doesn’t apologize for using a term that has prompted people to look anew at flora. Giving a 2010 talk at a conference organized by TED (a nonprofit established to spread new ideas), Mancuso noted that a tiny region of a plant’s root tip is the locus of electrical signals called action potentials—the same signals found in human neurons. Mancuso said that even a small plant like rye has almost 14 million root tips, which is equivalent to a whole lot of action potential.

People have long assumed that a hunk of gray matter—a neurological control center—is a prerequisite for intelligence. But having a centralized brain wouldn’t make much sense for a plant because a predator, whether a grazing ruminant or lawn-mowing human, could easily chop it off. Instead, decentralized intelligence scattered throughout the roots is an uncannily effective survival strategy: A plant can survive when 90 percent of its root tips are cut off.

Most people don’t really focus on the plants around them, seeing these organisms as just part of the backdrop. Some botanists call this “plant blindness.” But plants certainly “see” us via photoreceptors that perceive different wavelengths of light (below). They are even aware of when we come near them and whether we’re wearing a blue or red shirt, according to Daniel Chamovitz, director of the Manna Center for Plant Biosciences at Tel Aviv University and author of the book What a Plant Knows. “Plants may not see in pictures the way we do,” says Chamovitz, “but they see colors that we can only imagine, like the ultraviolet light that gives us sunburns and the infrared light that heats us up.” 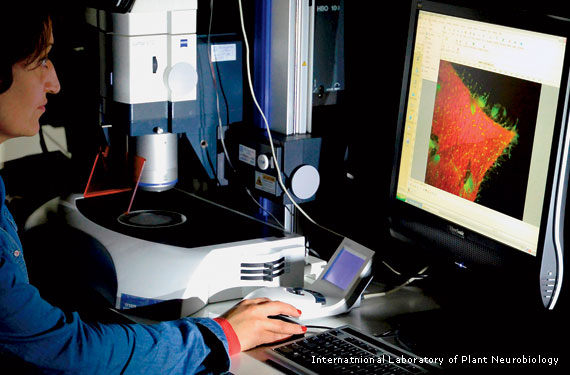 Research also has demonstrated that plants from the tiniest wildflowers to towering trees possess a more complex intelligence. May-apples, for example—which unfurl their umbrella-shaped leaves on the floors of eastern U.S. deciduous forests during spring—seemingly plan their growth as many as two years in advance, based on past and current weather conditions. And Douglas firs, giant conifers native to the West, exhibit a kind of altruism, using extensive underground fungal networks to share water and nutrients with other plants based on need. This sharing extends to the trees’ own seedlings and even to members of other species.

The roots of these and many other plant species monitor at least 15 different environmental variables, including moisture, nutrients, soil microbes and temperature. Such plants also essentially create a three-dimensional perspective of their surroundings to tap necessary resources and optimize growth. This 3-D reality is akin to a maze, and just as one of the tests of intelligence in animals is their ability to successfully navigate mazes in a lab, the capacity of plants to grow through an environmental maze signals a kind of intelligence.

Navigating a maze takes a talent for math. In 2013, scientists at the United Kingdom’s John Innes Centre who were studying Arabidopsis thaliana—a small weed in the mustard family that is the botanical equivalent of the lab rat—found that the weeds do some pretty complex arithmetic to prevent starvation at night. The plants need starch to survive, and they make it by photosynthesizing sunlight. During the night, they measure the amount of starch in their leaves, use an internal clock (similar to our own body clock) to estimate the amount of time until dawn, then divide their food reserve by the length of time until dawn so they have enough starch to last until the sun rises. When the plants resume photosynthesizing, about 95 percent of their starch has been consumed.

Beyond analytics, plant intelligence extends to language. Evidence suggests that plants communicate with the roots of other plants and with soil organisms via a diverse repertoire of chemical compounds exuded through their roots. Likewise, plants call out to their pollinators by exuding airborne fragrances as alluring as any bouquet. (Anyone who has taken a whiff of the huge trumpet-shaped blooms of the sacred datura can empathize with the hawk moth pollinators lured by the sweet perfume (below). Some plants also produce an arsenal of volatile chemicals to defend themselves from unwelcome herbivores and enlist bodyguards—predators of the beasts that are causing damage. These are just some of the thousands of chemical compounds that comprise plant vocabulary. Humans “just have sound waves broken down into various languages,” quips Mancuso. “I don’t see how we could bridge the gap.”

Self-recognition is another criterion considered essential to demonstrate intelligence. Simply put, if an animal in front of a mirror can recognize itself in the reflection, humans deem it smart. So far, a handful of primates—including humans more than 18 months old, elephants, bottlenose dolphins, orcas and European magpies—have passed this test.

But studies indicate that plants are capable of self-recognition, too. Consider white bursage, one of two signature plants of the Mojave and Sonoran Deserts in the Southwest. A nondescript woody shrub that looks like a low mound of lifeless twigs during much of the year, bursage puts on a dense covering of small leaves and tiny yellow flowers in spring. Researchers Bruce Mahall of the University of California–Santa Barbara and Ragan Callaway of the University of Montana found that the roots of individual bursage plants inhibited the growth of other individual plants with which they came into direct physical contact but did not impede the growth of their own roots. In this way, they could distinguish “self” from “other.” 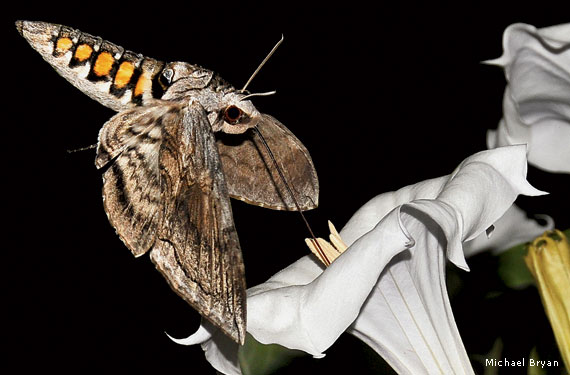 Even more impressive is a study of the Great Lakes sea rocket. This scraggly looking annual native to the Upper Midwest has small lavender flowers and colonizes sandy beaches where it gets battered by the wind. At first glance, the plant would not appear to be a botanical wunderkind. But inspired in part by the bursage study, plant ecologist Susan Dudley of McMaster University in Ontario, Canada, decided to use the sea rocket to investigate whether plants can recognize their relatives.

Though Dudley says she “thought it would be fun to look,” she didn’t necessarily expect to find what she was looking for. But the sea rocket surprised her. In August 2007, Dudley and graduate student Amanda File found there was less root competition when closely related “siblings” shared the same container than when groups of strangers grew in a common pot. In other words, the Great Lakes sea rocket not only recognizes but acts altruistically toward its relatives, a phenomenon scientists call “kin recognition.”

The discovery was unorthodox enough that it was met, in Dudley’s words, with “a whole lot of skepticism.” Yet she continued working with colleagues on studies of plant altruism. “I found it and kept on finding it,” she says. Now, just a few years later, the study of kin recognition in plants has moved from dubious endeavor to established science.

More well-established—for over  two centuries—is the knowledge that anesthesia has the same effect on plants and animals, inducing an unresponsive state similar to a coma. Ethylene, a plant hormone released after a plant is wounded, has been used as an anesthetic for humans. In a 2009 paper, plant physiologists Mancuso and Frantisek Baluska of the University of Bonn made this logical leap: “As ethylene is released after wounding,” they wrote, “it might act to relieve ‘pain’ in plants.”

How are we humans supposed to treat creatures that act altruistically toward relatives and may even be capable of feeling pain? Some ethicists argue that plants should be treated with respect and not as passive resources. Regardless of the ramifications, it’s impossible not to marvel at discoveries that plants perceive in ways we are barely beginning to understand.

Janet Marinelli’s latest book is The Climate Conscious Gardener. To learn more, visit www.janetmarinelli.com.
May is Garden for Wildlife Month