How do beavers fell trees in a preferred direction? A 10-year study reveals the answer. 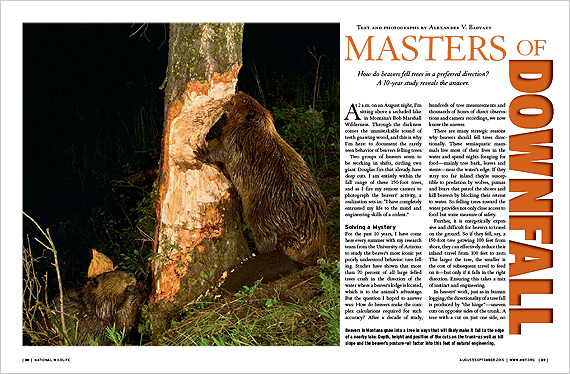 AT 2 A.M. ON AN AUGUST NIGHT, I’m sitting above a secluded lake in Montana’s Bob Marshall Wilderness. Through the darkness comes the unmistakable sound of teeth gnawing wood, and this is why I’m here: to document the rarely seen behavior of beavers felling trees.

Two groups of beavers seem to be working in shifts, circling two giant Douglas firs that already have deep cuts. I am entirely within the fall range of these 150-foot trees, and as I fire my remote camera to photograph the beavers’ activity, a realization sets in: “I have completely entrusted my life to the mind and engineering skills of a rodent.” 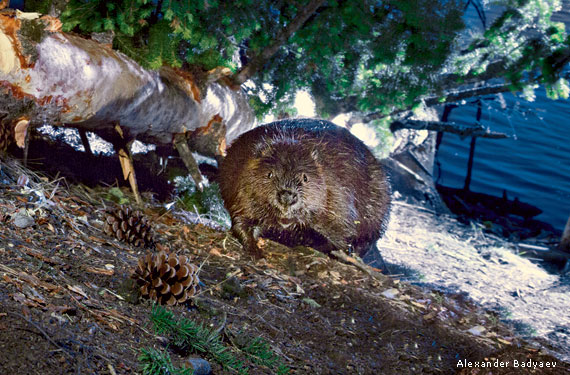 For the past 10 years, I have come here every summer with my research team from the University of Arizona to study the beaver’s most iconic yet poorly understood behavior: tree felling. Studies have shown that more than 70 percent of all large felled trees crash in the direction of the water where a beaver’s lodge is located, which is to the animal’s advantage. But the question I hoped to answer was: How do beavers make the complex calculations required for such accuracy? After a decade of study, hundreds of tree measurements and thousands of hours of direct observations and camera recordings, we now know the answer.

There are many strategic reasons why beavers should fell trees directionally. These semiaquatic mammals live most of their lives in the water and spend nights foraging for food—mainly tree bark, leaves and stems—near the water’s edge. If they stray too far inland they’re susceptible to predation by wolves, pumas (below) and bears that patrol the shores and kill beavers by blocking their retreat to water. So felling trees toward the water provides not only close access to food but some measure of safety.

Further, it is energetically expensive and difficult for beavers to travel on the ground. So if they fell, say, a 150-foot tree growing 100 feet from shore, they can effectively reduce their inland travel from 100 feet to zero. The larger the tree, the smaller is the cost of subsequent travel to feed on it—but only if it falls in the right direction. Ensuring this takes a mix of instinct and engineering. 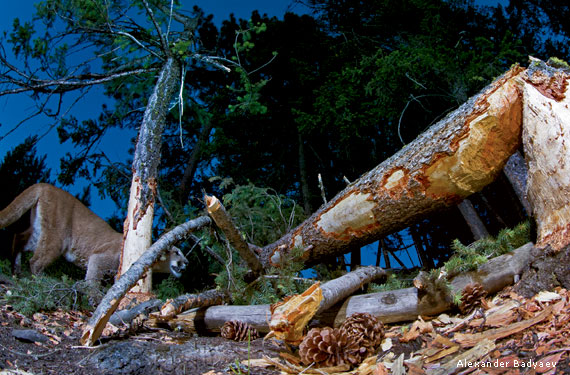 In beavers’ work, just as in human logging, the directionality of a tree fall is produced by the "hinge"—uneven cuts on opposite sides of the trunk. A tree with a cut on just one side, no matter how wide, can collapse in any direction. But an additional small cut on the opposite side will make the fall strongly directional, with the direction depending on whether the second cut is above or below the initial cut. If it’s above the first cut, the tree will fall in the direction of the initial cut; if below, the tree will fall the opposite way.

Making that second cut uneven in height to produce the hinge depends on changes in the beaver’s posture (sitting or standing) and the slope on which the tree is growing. On a tree that grows uphill from the water, for example, if a beaver starts cutting on the uphill side then simply circles the tree without changing its posture, it will produce a second cut below the first one—and a directional fall of the tree towards the water. Likewise, if the beaver starts its work on the downhill side of the tree and maintains its posture as it circles the tree, the tree will also fall toward the water. 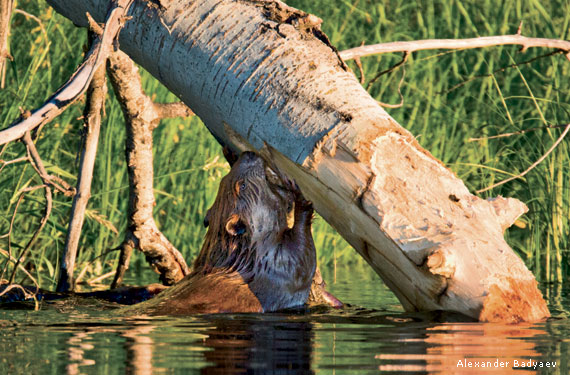 To determine whether this tree felling behavior is intentional or just a passive consequence of topography, I needed a study area with a variety of slopes and flat areas as well as the opportunity to observe the beavers’ behavior directly—something that requires infrared cameras because beavers cut trees mostly at night.

With its numerous flat valleys, lakes and forested hills, the Bob Marshall Wilderness area proved ideal. Beavers here seem to specialize in felling large coniferous trees—particularly Douglas fir and ponderosa pine—often more than 100 feet in height and 30 inches in diameter. It takes a beaver family up to three weeks to fell such trees, which gave me and my colleagues plenty of opportunity to directly observe the animals and record their techniques.

We discovered that nearly all large trees in the area, especially those farther from water, had circular cuts of uneven heights and depths or directional hinges. In flat areas, beavers typically started their work on the side closest to water, gradually widening the cut over consecutive nights. Notably, as they circled the tree, they would rise on their hind legs, producing a second cut on the opposite side that was higher than the initial one. In just a few days, such trees would crash directly towards the water.

Camera footage revealed another reason for postural changes when cutting on even ground. Large trees with deep, even circular cuts become unstable and sometimes cause the tree to collapse, crushing the beaver’s head. But a cut above or below the initial deep opening prevents this problem, speeds up the work and produces a directional tree fall.

When we observed beavers cutting trees on slopes, no such change in posture occurred: The position of the second cut instead depended on whether the beaver moved upslope or downhill from the initial cut. So it was the location of the first cut that determined the direction of tree fall.

This complex feat requires learning the optimal approach to a tree in relation to topography. To gain this skill, juvenile beavers watch intently when joining parents on cutting forays during the first two to three years of life, then practice until they become masters of directional felling.

Yet even masters face hazards. To learn why beavers sometimes get killed felling trees, I studied the literature. What I found is that most of the unlucky beavers get killed not when a tree falls on them but when their heads get pinched by the upper part of the trunk sliding down on the lower part, a common result of a cut that is too even in height and depth. Often such trees do not fall at all but get stuck in the canopy and remain standing with an unfortunate beaver pinned at the base—all the more reason for beavers to master the craft of uneven cuts. 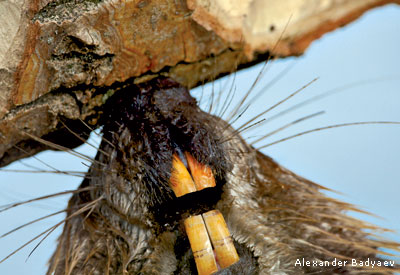 One of the most intriguing examples of tree-felling strategy involves communal labor. In summer, every beaver colony we observed cached dozens of large trees underwater to last through the winter, when beavers essentially live under the ice. Yet nearly all of these trees were ultimately felled by wind and not by the beavers themselves.
Every night during late summer and early fall, a beaver family would spread out ashore and gnaw on several large trees simultaneously, making or deepening large circular cuts, but moving to work on new trees before completing the cuts. After a week of frantic activity, there would be plantations of large precut trees around each lake, swaying precariously in the slightest breeze. One powerful thunderstorm with gusty winds could bring all these trees down in a matter of hours, leaving ample supply for the winter cache.

Remarkably, such wind-assisted tree falls were also directional—most trees collapsed toward the water. When we measured the stumps of such trees, we found larger and higher cuts on the uphill sides, where beavers usually started their work, and lower cuts on the downhill sides. This strategy ensured that the trees collapsed toward water despite growing on opposite slopes and with wind gusting from every direction.

In the weeks after such massive tree falls, the beavers would partition trees into 3-to-4-foot chunks and carry them to the bottom of their lakes. During the long winter, such food caches support the growth of a new generation of beavers that, come summer, will join their parents and older siblings to begin learning and mastering the iconic skill that has intrigued naturalists for centuries.

Photographer and author Alexander V. Badyaev is a professor of evolutionary biology at the University of Arizona.

Leave the Wetlands to Beaver
The Eyes of a Scientist: Photography and Wildlife Research
Rattlesnakes on the Hunt, by Alex Badyaev
Badyaev's Dazzling Images of the Nocturnal Gray Fox