Sharks blooming late, social life of pandas, fish that are masters of deception and more 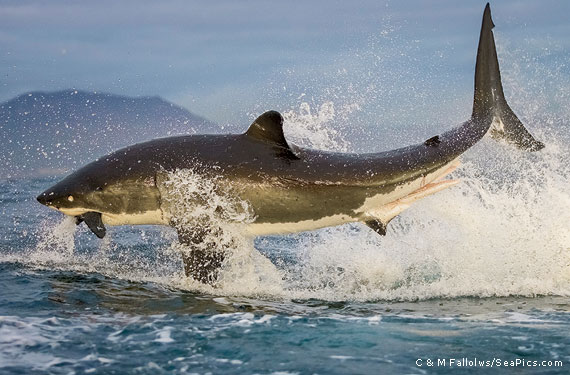 A landmark investigation of great white sharks in the western North Atlantic indicates that they grow more slowly and mature much later than once thought. The findings, published in PLOS ONE by federal and state fisheries biologists in Massachusetts, provide the first reliable growth curve for these top predators: Males are sexually mature around age 26 and females around age 33, significantly later than current estimates of 4 to 10 years for males and 7 to 13 years for females. Using radiocarbon-dating techniques to measure vertebrae from deceased white sharks, the researchers report that the creatures can live 70 years or more and may be among the longest-lived fish. This is significant, as increased age at maturity makes the white shark—classified as “vulnerable” by the International Union for Conservation of Nature—even more sensitive to fishing pressure, given the longer time needed to rebuild populations.

A white band of mineral deposits shows how drastically Lake Mead in Arizona has fallen—now at its lowest level since the 1930s, in part due to drought and water diversions along the Colorado River. But the bulk of the region’s water problems may lie below ground. According to the first study designed to quantify groundwater use in the region, scientists at NASA and the University of California–Irvine (UCI) say groundwater withdrawals account for more than 75 percent of the 17 trillion gallons of water lost in the basin since 2004. “This was shocking,” says UCI researcher Stephanie Castle, an author of the study published in Geophysical Research Letters. “We don’t know exactly how much groundwater we have left, so we don’t know when we’re going to run out.” Running out would have dire consequences: The Colorado River Basin supplies water for about 40 million people in seven states as well as for farmland irrigation and hundreds of plant and animal species. 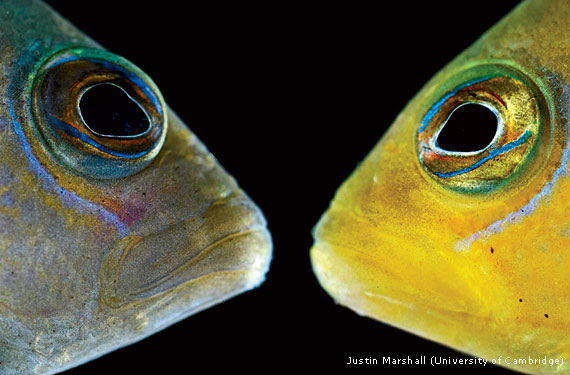 Using mimicry to hunt or hide from other species is common in nature, but scientists at the University of Cambridge say that a predatory reef fish called the dusky dottyback is different from other deceivers: It can change its body color to imitate a number of fish species in its Indo-Pacific range. “This is the first time that an animal has been found to be able to morph between different guises in order to deceive different species, making the dottyback a pretty crafty little fish,” notes study coauthor William Feeney in the March issue of Current Biology. The research team found that the fish can change its coloration to brown or yellow (left and right, respectively, in this composite photo above) to match the hues of two types of damselfish prey off Australia. When the dottyback does this, it is three times more successful at capturing its prey. 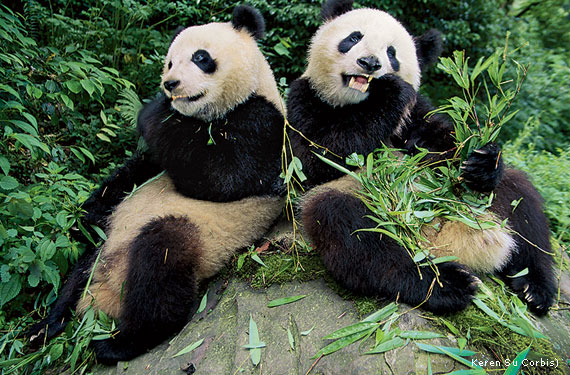 Unlike captive giant pandas in China’s Wolong National Nature Reserve (above), wild pandas are difficult to observe in remote Chinese bamboo forests. To shed new light on panda behavior in the wild, Michigan State University researcher Vanessa Hull and colleague Jindong Zhang used GPS technology to follow five of the endangered animals during a year. Writing in the March 2015 issue of the Journal of Mammalogy, they report that the animals are not loners outside of spring mating season, as experts have long believed. GPS data showed the pandas feeding together in a forest for several weeks in the fall. “They were in the same locations, which we never would have expected for that length of time and at that time of year,” says Hull. To protect the 1,860 pandas surviving in the wild, Chinese officials until recently had prevented scientists from using GPS collars. They allow a peek into the panda’s “secretive society,” says Zhang. 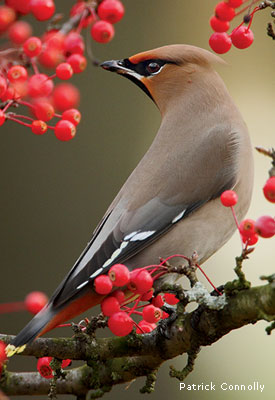 In a recent survey of 25 areas in greater Chicago, biologists at the University of Illinois–Chicago (UIC) discovered that homeowners’ yards can play a significant role in attracting a variety of native birds to a neighborhood. “We were surprised by the diversity of species we found in people’s neighborhoods,” says UIC researcher Amy Bellaire, who conducted the survey during peak breeding season for birds such as this bohemian waxwing in a Chicago suburb (right). Bellaire and her colleagues found that areas with many yards containing avian-friendly vegetation—such as berry-producing shrubs and a mix of evergreen an d deciduous trees—attract twice as many bird species as those with yards lacking such features. The study is one of the first to examine the impact of private backyards on bird populations.