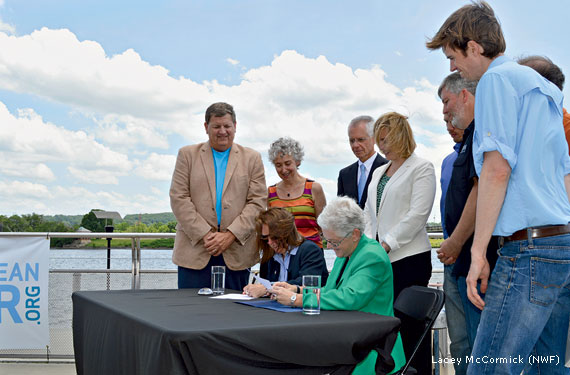 On May 27, along the banks of the Anacostia River in Washington, D.C., the National Wildlife Federation and the Earth Conservation Corps (NWF’s D.C. affiliate) hosted U.S. Environmental Protection Agency (EPA) Administrator Gina McCarthy and Assistant Secretary of the U.S. Army Corps of Engineers Jo-Ellen Darcy for their signing of the Clean Water Rule (above). This historic occasion restored U.S. Clean Water Act protections to millions of acres of at-risk wetlands and streams.

Two U.S. Supreme Court decisions (in 2001 and 2006) brought into question whether 60 percent of the nation’s stream miles and 20 million acres of its wetlands fall under the jurisdiction of the Clean Water Act. Yet these streams provide drinking water for a third of U.S. residents and feed into rivers, lakes, bays and wetlands—all vital wildlife habitat. 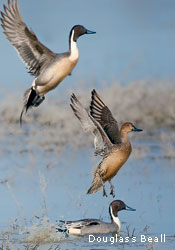 NWF and its state affiliates rallied support to restore protections for these waters. Since the agencies proposed the rule last year, they received more than 800,000 comments in its favor, including nearly 30,000 from Illinois, where NWF affiliate Prairie Rivers Network (PRN) gathered support with its #4cleanwater Twitter campaign. “Millions of people depend on headwaters for drinking water,” says PRN’s Water Policy Specialist Robert Hirschfeld. “When you don’t protect the source, the bigger streams and rivers aren’t going to be protected.”

O’Mara says the new regulation will benefit wildlife across the country, from Florida manatees to Minnesota mallards. “We were particularly pleased that the EPA listened to scientific input and increased protections for some of the Prairie Potholes in the upper Midwest. These wetlands provide critical breeding grounds for millions of ducks every year—more than half of the nation’s waterfowl” (including pintails, left).

“With states like California in the midst of a historic drought and many of the plains states experiencing historic flooding all at the same time, it’s more important than ever that we protect our streams and wetlands in the face of a climate that is changing,” said McCarthy. “By adopting this rule,” added Darcy, “we are giving clean water to the next generation.” Learn more at www.nwf.org/cleanwater. 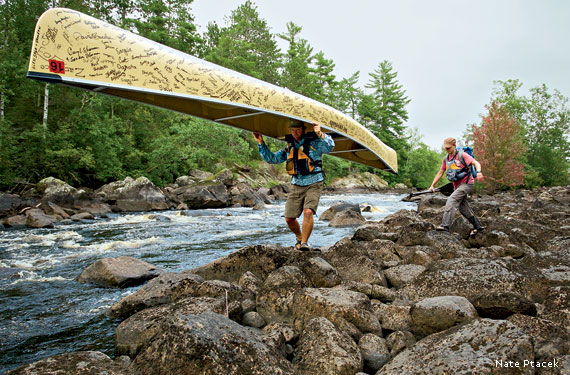 Sometimes a 2,000-mile journey begins with the stroke of a paddle—and a pen. Named National Geographic Adventurers of the Year in 2014, Amy and Dave Freeman (above) canoed, portaged and sailed from Ely, Minnesota, to Washington, D.C., last fall. The effort was part of the Save the Boundary Waters campaign to protest mining near this wilderness area, which Dave calls “a true national treasure.” Along the way, the couple collected about 60,000 signatures—some on the canoe and most on petitions given to Congress.

Antofagasta Minerals’ Twin Metals Minnesota company wants to put in a sulfide-ore copper mine within miles of the Boundary Waters. Minnesota Conservation Federation (MCF), an NWF affiliate, proposed a resolution against sulfide mining in the wilderness’ watershed that passed this year at the Federation’s annual meeting. Sulfuric acid from such mines could pollute the “now pristine” Boundary Waters, says MCF Executive Director Gary Botzek. “We would never get that back.” Campaign Chair Becky Rom adds, “Mining is a boom-and-bust economy that would leave us with polluted waters and a destroyed landscape.” 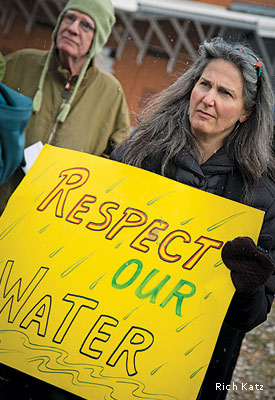 The effort began in January 2014 after at least 10,000 gallons of a toxic coal-washing chemical (MCHM) leaked from a tank and contaminated the Elk River, the drinking-water source for 300,000 people. Residents in nine counties were told not to drink, bathe in or cook with the water for days, and nearly 600 reported having flulike symptoms and rashes. Eleven days after the spill, WV Rivers called for action to address threats to the state’s waterways. In March 2014, the state passed a bill requiring water utility companies to present source-water protection plans for public review. WV Rivers Executive Director Angie Rosser says work remains to be done: “About 38,000 tanks in the state still aren’t covered.”

The long-term effects of MCHM on people and wildlife are still unknown. (It’s unclear if the spill impacted the diamond darter, a fish WV Rivers successfully petitioned to be listed as endangered in 2013.) Regardless, WV Rivers Board Member Nancy Ward (left) says the cost to the state’s reputation and businesses remains severe: “We are soon going to realize that water is our most precious resource—not coal, not oil, but water.” 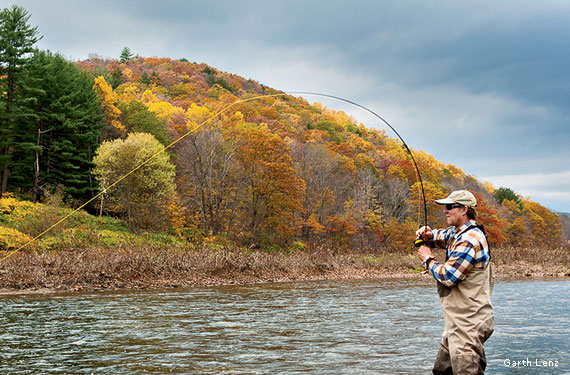 Delaware River Basin Gets a Boost

The U.S. Department of Agriculture has granted $13 million to efforts in New York, New Jersey and Pennsylvania to improve water quality in the Delaware River Basin. The Coalition for the Delaware River Watershed—70 organizations including NWF and its affiliates the Delaware Nature Society, New Jersey Audubon and PennFuture—led the charge to obtain this first federal funding for public-private projects in the basin.

The Delaware River (right) is the longest free-flowing river east of the Mississippi River, running 330 miles from New York through Pennsylvania and New Jersey and into the Delaware Bay. Its basin, says NWF President and Delaware resident Collin O’Mara, “delivers clean drinking water to 16 million people, provides habitat for a diverse mix of fish, birds and other wildlife and offers abundant recreational opportunities for our families.”

More aid may be on the horizon. In April, Delaware Senator Tom Carper and Congressmen John Carney introduced the Delaware River Basin Conservation Act (DRBCA). It would establish a Delaware River Restoration Program to enhance watershed-protection efforts across all four basin states, including authorizing $5 million for grants. “The DRBCA will help ensure that the region’s most pressing protection and restoration needs are addressed,” says Coalition Director Kim Beidler. 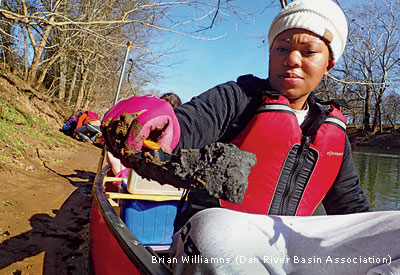 Based in the Chesapeake Bay region, the Choose Clean Water Coalition (CCWC) successfully pushed for the U.S. Environmental Protection Agency (EPA) to release EJSCREEN in June after several years of development. This online GIS-mapping tool shows an areas’ proximity to sources of water, air and soil pollution as well as demographic information such as whether a community is low income—data that could help indicate which communities have environmental-justice concerns.

Twenty-eight CCWC members—including NWF and its affiliates the National Aquarium, PennFuture, Virginia Conservation Network and West Virginia Rivers Coalition—petitioned the EPA to release the tool. “EJSCREEN will help organizations and states target their outreach efforts and invest money where it is needed most,” says CCWC Director Jill Witkowski. “The public also can use it to better understand environmental threats to their neighborhood.” Salem College student Jada DeCreny-Jackson (above), who studied effects of coal ash in Virginia’s and North Carolina’s Dan River, agrees. When people are educated, she says, “they can make an effort to protect themselves.”

For more information about the tool, go to www2.epa.gov/ejscreen.