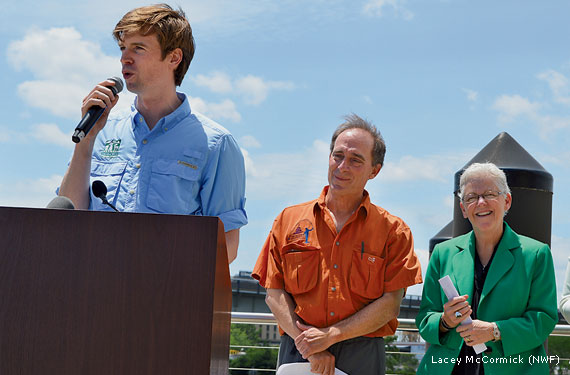 CLEAN WATER IS ESSENTIAL FOR ALL LIFE. It is a critical ingredient needed to restore healthy populations of fish, birds, reptiles, amphibians and mammals. It sustains many tourism and recreation economies and millions of jobs, and it makes up more than half of the human body. Simply put, our health and life on Earth depend on clean water.
Yet too often, we take clean water for granted—until it’s too late. Across our nation, we are seeing the paralyzing effects of decades of decisions that insufficiently considered consequences to our water supply. In just the past few years, we’ve seen major oil spills in Montana’s Yellowstone River and Michigan’s Kalamazoo River, and in Mayflower, Arkansas, and Santa Barbara, California. We’re seeing the lingering effects of the horrific BP spill in the Gulf of Mexico and a growing hypoxic dead zone in the gulf. We’ve witnessed harmful algal blooms in Lake Erie, the Chesapeake, the Everglades and Long Island’s Peconic Estuary. We’ve seen a massive chemical spill in West Virginia’s Elk River and a coal-ash spill in the Dan River in North Carolina. And we’re seeing historic droughts across California and flooding in Texas.

The National Wildlife Federation continues to make water conservation a priority, and we’re working hard to address existing threats and prevent new ones. For example, in partnership with the Minnesota Conservation Federation and others, we’re trying to protect the spectacular Boundary Waters Canoe Area Wilderness by working to stop a proposed sulfide-ore copper mine that could lead to sulfuric acid entering the headwaters. In the Straits of Mackinac connecting Lake Michigan and Lake Huron, we’re working to remove the threat of a 70-year-old pipeline that is past its expected life and threatening the Great Lakes, our greatest freshwater treasure. In Alaska, we’re working with the Renewable Resources Coalition to stop Pebble Mine, which could harm North America’s last great salmon nursery. NWF doesn’t oppose all mining, but there are some places where we simply cannot afford the risks to water and wildlife.

We can do better as a nation—and NWF and our affiliates are committed to leading this charge. Our efforts took a huge step forward this May when the administration unveiled the final Clean Water Rule, which will restore protections for millions of miles of streams and millions of acres of wetlands. Building upon years of leadership, NWF was proud to host the announcement (above) with Earth Conservation Corps, our Washington, D.C., affiliate.

There’s more to do, particularly as we face escalating climate impacts such as prolonged droughts and sea-level rise. To succeed, we must convince people that rivers, lakes and wetlands are essential resources and must be cared for as such. We must address issues such as corroding infrastructure, cropland expansion due to ethanol mandates and subsidies and destruction of wetlands and forests that filter pollution. We must promote agricultural best practices and water conservation, expand water recycling and ensure sufficient ecological flows.

Despite the challenges, I remain optimistic. With the help of dedicated supporters like you, we will overcome these obstacles—and in doing so we will leave an incredible legacy for wildlife and future generations.