Purging Trout to Save Frogs

A controversial fish-removal effort pits some anglers against conservationists 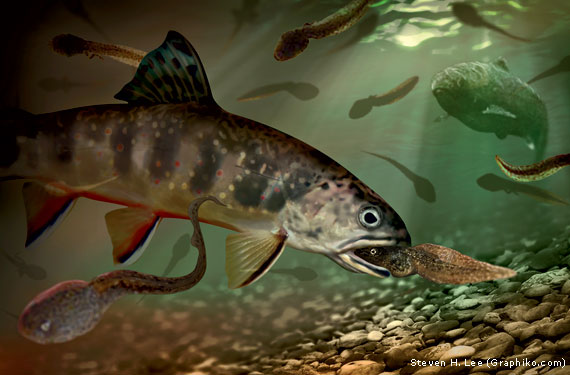 THIS SUMMER, the California Department of Fish and Wildlife (CDFW) will string gillnets across Gold Lake in California’s Plumas County to trap and kill alien brook trout imported long ago from the East. The plan is part of a wider effort by CDFW, the U.S. National Park Service (NPS) and U.S. Forest Service to remove brook, rainbow and other trout species stocked for food and sport in waters throughout former frog habitat in California’s High Sierra. The effort is sparking protest from area anglers, but it’s likely the only way to keep mountain yellow-legged frogs (MYLFs) on the planet and to help rebuild a collapsed ecosystem.

These frogs evolved at high elevation in frigid, naturally fishless waters. Of two closely related MYLF species, Rana sierrae diverged from the more southerly R. muscosa and is barely hanging on near Gold Lake. Both species have nearly been wiped out across their range. Their demise is a case study of the ripple effects when we try to alter nature, and the fight to save them reveals our best and worst roles as caretakers of the natural world.

Around 1870, prospectors and mountaineers started packing trout fry into some Sierra lakes, including those in what is now the Plumas National Forest. Thousands more were stocked after World War II, when the state dropped fry from airplanes. Virtually no lake remained fishless. The aliens thrived by eating tadpoles, small frogs and native invertebrates. Soon there was little for trout or frogs to eat. Frogs that escaped predation frequently starved, and trout often developed stunted, snakelike bodies.

As early as 1915, naturalist and Sierra explorer Joseph Grinnell noted that “frogs, in the tadpole form at least, do not occur in lakes which are stocked with trout.” Indeed, trout unraveled the High Sierra ecosystem. Frog predators, such as the mountain garter snake, were drastically reduced, as were many insect eaters, such as the Pacific tree frog and gray-crowned rosy finch, that the trout deprived of food. 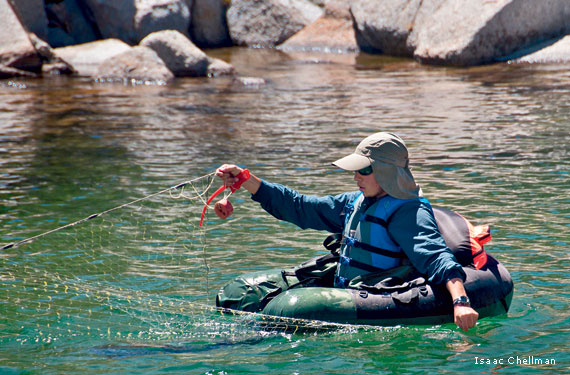 In the early 1990s, research biologist Roland Knapp removed trout from a few lakes in the Inyo National Forest, and frogs surged back. In 2001, NPS began gillnetting two trout-infested lakes in Sequoia and Kings Canyon National Parks (above), where it had found only 134 adult frogs and 53 tadpoles. After three years of trout removal, there were 5,000 adults and 15,000 tadpoles.

Other species also rebound once trout are gone. “We start seeing big mayfly hatches within two or three years of trout removal,” says NPS aquatic ecologist Danny Boiano. “We see the rosy finches come in and feed on the mayflies. We see garter snakes come in, nutcrackers, blackbirds.” To expand this success, NPS plans to remove trout from 87 more lakes in Sequoia and Kings Canyon. But it would leave trout in 462 others, so there would be little effect on fishing, local economies or state fishing-license revenue.

Still, state and federal resource agencies are having trouble making the case that native frogs matter and that it’s okay to lose a few alien trout. Gold Lake, for example, offers the only opportunity in Plumas County for recovery of R. sierrae. The county has plenty of other trout-infested waters, yet Gold Lake has become a lightning rod in the fight between defenders of alien trout and defenders of frogs and native ecosystems.

Some locals are so apoplectic at the prospect of losing trout that they’ve threatened biologists, and the project is being bashed by many public officials and the media. One local newspaper chain asks: “If the yellow-legged frog disappears, would anyone notice?”

Proposed methods of trout removal are also drawing fire. Of the 87 NPS lakes slated for frog recovery, 38 are too large for physical fish removal with gill nets or electrofishing (when stream fish are stunned for dipnetting). In such cases, NPS proposes using rotenone, a short-lived organic poison that some people oppose. Applied at no more than 200 parts per billion, rotenone has been proven safe for humans and air-breathing wildlife and effective at removing invasive fish. For example, in one of the few High Sierra streams that supports native fish, rotenone killed off alien rainbow trout, allowing reintroduction of native Paiute cutthroat, the rarest trout in the United States. Rainbows were hybridizing it out of existence, but now it has a shot at survival. 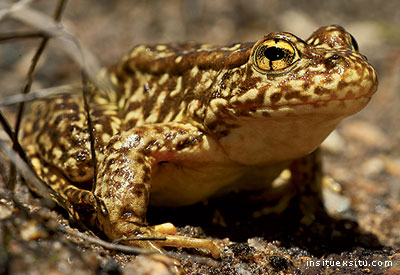 Fortunately, supporters of mountain yellow-legged frog (left) recovery include angler-naturalists for whom life in the outdoors means more than bent rods and heavy creels. One of them is Ralph Cutter of Nevada City, California, who runs a flyfishing school and guide service in the High Sierra. In a letter to the park service, he wrote: “The need to preserve, protect, and in this case restore the Sierra ecosystem far outweighs [personal] short-term pleasure and financial gains. ... I would much rather leave a legacy of as natural an ecosystem as possible.”

If such sentiment catches on, mountain yellow-legged frogs might remain on the planet, wildlife that depend on them might recover, and trout fishing in the Sierra might become the kind of experience anglers like Ralph Cutter hold dear.

Conservation writer Ted Williams is based in Massachusetts.