Coming eye to eye with the world’s most mysterious whales 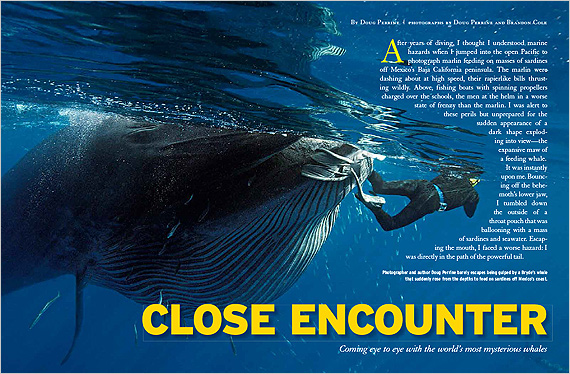 AFTER YEARS OF DIVING, I thought I understood marine hazards when I jumped into the open Pacific to photograph marlin feeding on masses of sardines off Mexico’s Baja California peninsula. The marlin were dashing about at high speed, their rapierlike bills thrusting wildly. Above, fishing boats with spinning propellers charged over the schools, the men at the helm in a worse state of frenzy than the marlin. I was alert to these perils but unprepared for the sudden appearance of a dark shape exploding into view—the expansive maw of a feeding whale.

It was instantly upon me. Bouncing off the behemoth’s lower jaw, I tumbled down the outside of a throat pouch that was ballooning with a mass of sardines and seawater. Escaping the mouth, I faced a worse hazard: I was directly in the path of the powerful tail.

This was a terrifying moment for me because I knew that the area between a whale’s dorsal fin and tail has been called the “arc of death.” When the tail flashed past without contact, I surfaced to breathe a sigh of relief, realizing I had just survived a feeding rush by a Bryde’s (pronounced Bree-dah’s) whale. Cetacean biologist Elizabeth Burgess of the New England Aquarium calls the species “the most mysterious large whales in the world.” I’ve come to learn why.

Perhaps the least studied of all the great whales, Bryde’s is classified as “data deficient” by the International Union for Conservation of Nature. Although the whales occur in tropical to warm-temperate waters in the Indian, Pacific and Atlantic Oceans, breeding populations are poorly defined and their numbers unknown. Scientists do not even agree as to whether the Bryde’s represents one, two or several species or if the variants are just inshore and offshore forms of a single species.

While they can grow to more than 50 feet long, Bryde’s whales are smaller than most of the dozen or so species of baleen (filter-feeding) whales. Yet “biologically, they’re amazing,” says researcher Matt Leslie, a biologist at the University of California–San Diego. “Small, speedy, very agile . . . not the big lumbering brutes that you think of as baleen whales.”

I can attest to that. Encountering Bryde’s whales in Mexico and South Africa, I’ve experienced them more as Polaris missiles than bloated behemoths. When their throat pleats are not expanded, they have a slender eel-like appearance. They also display more cunning than I’ve seen in other whale species. In Mexico, they’d repeatedly rise into view, examine a bait ball and then sink out of sight before suddenly appearing again in a feeding rush. Likewise, when I was photographing sharks and birds feeding on sardines in South Africa, I was unaware of the Bryde’s whale lurking below. My heart nearly stopped when it erupted from the depths and bit off a giant chunk of the bait ball.

Indeed, Bryde’s have been dubbed “rocket whales” for their high-speed charges through concentrations of prey such as small fish or krill. As the only baleen whale to feed almost exclusively in warm waters, they do not need thick blubber or a large body mass to conserve heat. Lacking a heavy blubber layer to store energy, however, requires them to hunt voraciously and constantly.

Perhaps the most fascinating quality of these whales is their adaptability. Rochelle Constantine, a biologist at New Zealand’s University of Auckland, hypothesizes that resident Bryde’s whales in the Hauraki Gulf off New Zealand’s North Island shift their diet throughout the year, depending on zooplankton abundance. “We’ve found that they’re eating what I call plankton soup,” a mix of larvae and zooplankton, Constantine says. “And then they’re targeting clouds of red mysid shrimp and krill. Also they’re feeding on fishes.”

Mooching off the Hunt

To feed efficiently on small fish, the whales need the help of industrious fellow predators such as marlin, dolphins and sharks. These smaller hunters might spend hours herding prey fish into a compact bait ball for their own dining convenience, yet a crafty Bryde’s whale may suddenly come rushing in and demolish the mass of bait fish in a single lunge. Because of this behavior, Burgess calls the Bryde’s the largest parasitic organism on Earth, or more specifically, a “50-foot kleptoparasite.” She recorded one whale following a school of dolphins for an hour and a half, “until the timing was right when that bait ball was at the mature phase [and the whale] could just lunge through.” Yet Bryde’s also feed on prey they catch unaided, even fish as large as mackerel and pollock.

The species’ appetite for fish has earned it the enmity of the commercial fishing industry. Japan continues to take about 50 Bryde’s whales per year under a “scientific whaling” exemption to the International Whaling Commission moratorium, with hopes to resume larger-scale commercial whaling in the future. Burgess calls this lethal scientific-research exemption “a threat, because we don’t know enough about the species . . . to know how many you can take.”

It’s clear that fewer whales would boost the take of commercial fisheries. One study by the Institute of Cetacean Research in Japan estimates that killing 4 percent of the biomass of minke, sei and Bryde’s whales would increase the catch of such fisheries as anchovy, skipjack tuna and mackerel. This suggests that Japan’s interest in resuming commercial whaling may have more to do with eliminating perceived competition than with providing whale meat for markets, especially given that catches in certain fisheries around Japan have been declining. While the International Court of Justice ruled in 2014 that Japan must halt its whale hunt in Antarctica, the ruling has no direct effect on Japan’s hunt for Bryde’s whales, which occurs in the Western North Pacific under a different program.

The oceans hold other threats as well. Collisions with shipping vessels, increasing ocean noise and debris and climate change could have drastic impacts on the whales and on their prey, the latter by altering ocean temperatures, currents and acidity.

In New Zealand—the only country where Bryde’s whales are ranked as critically endangered—the problem is not whaling but the whales’ habit of resting in shipping lanes near the Port of Auckland. Constantine reports that of 20 Auckland-area whales for which the cause of death could be identified, 17 were killed by vessel strike, and two or three became entangled in floating aquaculture lines. The shipping industry has voluntarily agreed to reduce ship speeds entering and leaving the port, perhaps providing relief for a population that scientists believe cannot support the current levels of mortality.

Elsewhere in the world’s seas, scientists do not have a handle on Bryde’s whale population sizes and know nothing about whether they are rising or falling. “These whales just don’t have the exposure or the people working on them,” says Nicky Wiseman, who earned her doctorate studying Bryde’s whales off New Zealand. “Until people do study them more, in every population around the world, there is still a lot needing to be found out about them.” 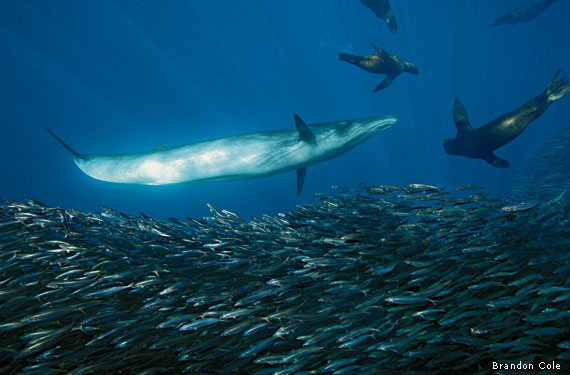 A lean and graceful Pacific ballet unfolds off Mexico’s Baja California peninsula as a hungry Bryde’s whale and sea lions circle a cluster of mackerel and sardines. 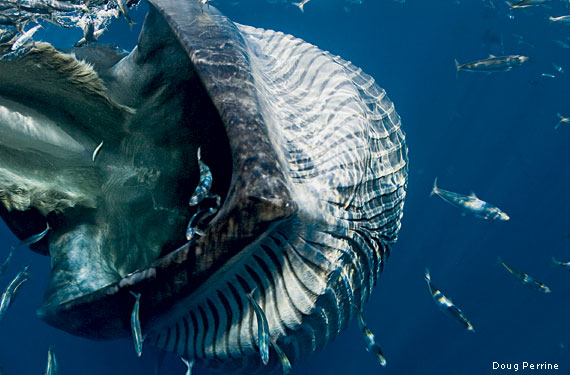 Quick, agile and stealthy, the whales balloon as their jaw pleats expand with water and fish. Perrine captured this too-close-for-comfort shot of a maw and its stringy baleen before escaping to safety. 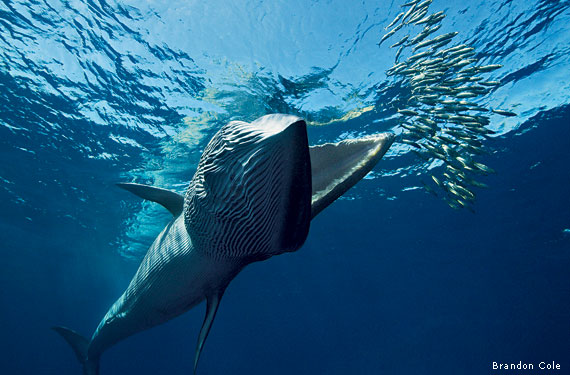 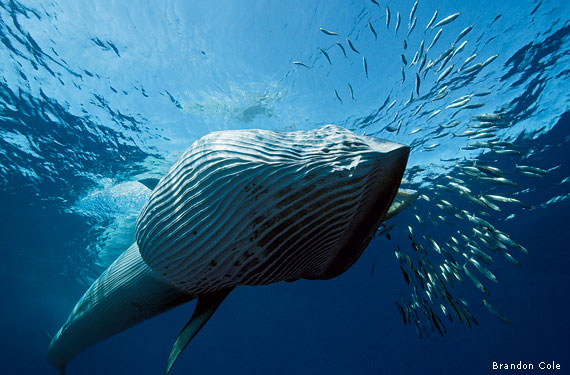 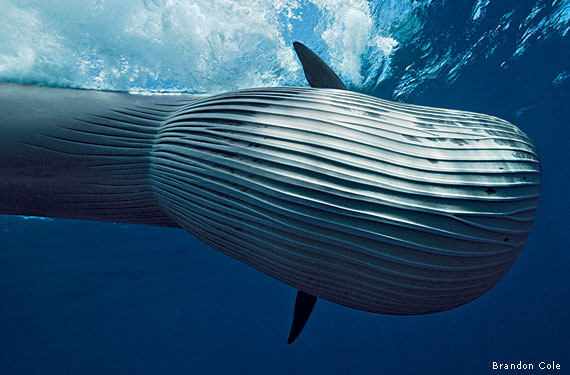 “I was repeatedly amazed at how something so big could be so sneaky and so fast,” says photographer Brandon Cole, who caught this sequence of a Bryde’s whale feeding on sardines off Mexico. There to photograph marlin, Cole had never seen a Bryde’s before it shot into view. “I was hyperventilating,” he recalls. “This was without a doubt my luckiest day at sea.” 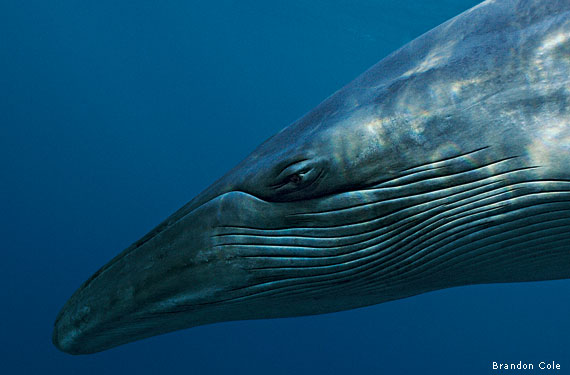 Stealth missile of the world's warm-water seas, Bryde's whales are thought to live about 50 years. Yet the little-studied species faces threats from whaling, boat strikes and lack of knowledge about how many exist--or how to ensure their future.