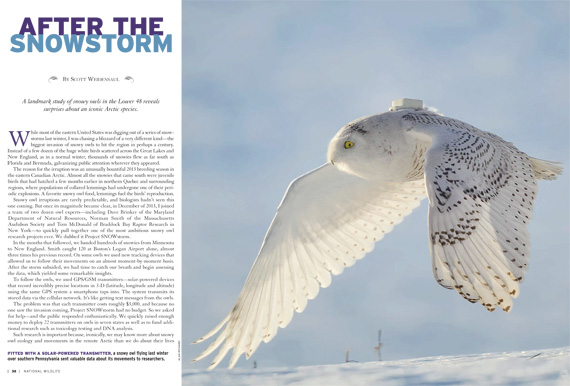 WHILE MOST OF THE EASTERN UNITED STATES was digging out of a series of snowstorms last winter, I was chasing a blizzard of a very different kind—the biggest invasion of snowy owls to hit the region in perhaps a century. Instead of a few dozen of the huge white birds scattered across the Great Lakes and New England, as in a normal winter, thousands of snowies flew as far south as Florida and Bermuda, galvanizing public attention wherever they appeared.

The reason for the irruption was an unusually bountiful 2013 breeding season in the eastern Canadian Arctic. Almost all the snowies that came south were juvenile birds that had hatched a few months earlier in northern Quebec and surrounding regions, where populations of collared lemmings had undergone one of their periodic explosions. A favorite snowy owl food, lemmings fuel the birds’ reproduction.

Snowy owl irruptions are rarely predictable, and biologists hadn’t seen this one coming. But once its magnitude became clear, in December of 2013, I joined a team of two dozen owl experts—including Dave Brinker of the Maryland Department of Natural Resources, Norman Smith of the Massachusetts Audubon Society and Tom McDonald of Braddock Bay Raptor Research in New York—to quickly pull together one of the most ambitious snowy owl research projects ever. We dubbed it Project SNOWstorm.

In the months that followed, we banded hundreds of snowies from Minnesota to New England. Smith caught 120 at Boston’s Logan Airport alone, almost three times his previous record. On some owls we used new tracking devices (see owl above) that allowed us to follow their movements on an almost moment-by-moment basis. After the storm subsided, we had time to catch our breath and begin assessing the data, which yielded some remarkable insights.

To follow the owls, we used GPS/GSM transmitters—solar-powered devices that record incredibly precise locations in 3-D (latitude, longitude and altitude) using the same GPS system a smartphone taps into. The system transmits its stored data via the cellular network. It’s like getting text messages from the owls.

The problem was that each transmitter costs roughly $3,000, and because no one saw the invasion coming, Project SNOWstorm had no budget. So we asked for help—and the public responded enthusiastically. We quickly raised enough money to deploy 22 transmitters on owls in seven states as well as to fund additional research such as toxicology testing and DNA analysis.

Such research is important because, ironically, we may know more about snowy owl ecology and movements in the remote Arctic than we do about their lives when they irrupt south. What our team learned from Project SNOWstorm both surprised us and shed new light on this charismatic polar species. 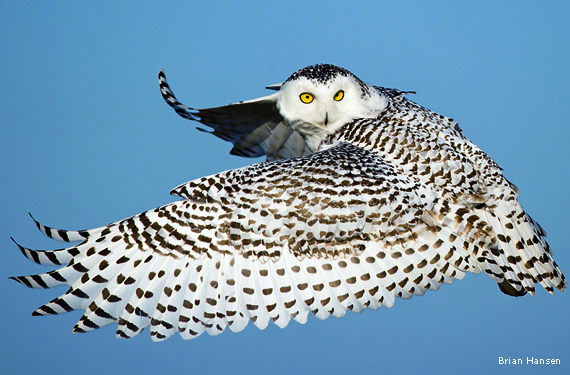 In recent years, satellite tracking in Canada, Alaska and Russia has shown that snowy owls are among the most nomadic birds on Earth. Some may move as far as 760 miles between one nesting season and the next, while others have moved up to 2,000 miles from winter to winter. Even those that return to the same place are far travelers; one tagged in 2012 by Smith  made a 7,000-mile round-trip from Boston to the Arctic and back.

Last year, we expected our tagged owls to settle down quickly and find a place to pass the winter—and some did. One young male in Ramsey, Minnesota, scarcely moved half a mile from his tagging site all winter. Another owl hung out for months along the St. Lawrence River in New York. Still others stuck close to the dairy farms and grasslands of Wisconsin.

But other snowies had wandering wings, especially those wintering along the Great Lakes or Atlantic coasts. Some of our tagged birds flew hundreds of miles in a few days—in one case, from the Maryland shore up into Amish farm country in Pennsylvania, back south to the Delaware Bay and then halfway up the coast of New Jersey.

Because our transmitters could record GPS locations as often as every 30 seconds, we quickly built up a detailed record of each owl’s movements, including where and when it hunted. The owls we tracked hunted almost exclusively at night and not always where you might expect. Rather than targeting small mammals—their primary food in summer—some snowies we tracked on the Atlantic Coast hunted almost entirely over open water. They seemed mostly to prey on waterbirds like ducks and gulls, often returning to offshore buoys and channel markers they used as hunting perches.

Up around the Great Lakes, our tagged owls initially hung out on the lakesides, hunting for waterfowl offshore. But as the lakes froze over, the snowies spent increasing periods out on the open ice, sometimes for weeks or months at a stretch. This was surprising: Lake Erie, for example, was more than 98 percent frozen during much of last winter, so we wondered what the birds ate and where they found prey. The answer? The lake actually was covered with immense plates of ice, which shifted and cracked with the prevailing winds, creating an ever-changing network of open-water rifts in which ducks and other owl prey apparently lived.

Interestingly, this hunting behavior mirrors something that scientists like Jean-François Therrien, a SNOWstorm partner and biologist at Pennsylvania’s Hawk Mountain Sanctuary, discovered a few years ago in the Arctic, working with colleagues at Laval University in Quebec. Using satellite tags, they found that a few adult snowy owls go north, not south, for the winter, hunting sea ducks in open-water cracks, called polynyas, in the ice floes. In a sense, the young snowies we were tracking were practicing a lifestyle some might later adopt in the perpetual darkness of the long Arctic winter.

If that environment sounds challenging, southern locations can perhaps be equally hazardous. Snowy owls love the open spaces of airports, where they risk being hit by planes or vehicles. That’s why Norman Smith and others made such an effort to relocate owls away from airports like Logan.

Yet risks remained, and some of our tagged owls died last winter. One was hit by a jet in Philadelphia, two drowned on the Massachusetts coast after a storm, and one died at an open-pit gold mine in Quebec. In all, several hundred snowy owls from last winter’s irruption died, often victims of vehicle or plane collisions or electrocution.

Those that did survive began moving north by March or April. The stay-at-home male from Ramsey, Minnesota, for example, began wandering in mid-March, moving through the Dakotas into Manitoba. We last heard from him in eastern Saskatchewan when he stopped for the day just a mile or two from the last cell tower between there and the Arctic Circle.

Because our transmitters depend on the cellular network to send us data, all of them went silent as the owls passed north of the last cell towers in southern Canada. However, the solar-powered transmitters continue to log data around the clock, with a storage capacity designed to last for years. When the tagged snowies return south, we will get a trove of data about their movements in the Arctic—and we’re not done yet.

As this issue goes to press in late 2014, we are heading back to the field to tag more snowy owls, which appear to be having another above-average irruption fueled by a major breeding season north of Baffin Island. Our work—along with that of notable owl researchers like Denver Holt of the Owl Research Institute and Irina Menyushina of the Wrangel Island State Nature Reserve—is helping scientists gain a fuller understanding of snowy owl ecology.

The Need for Answers 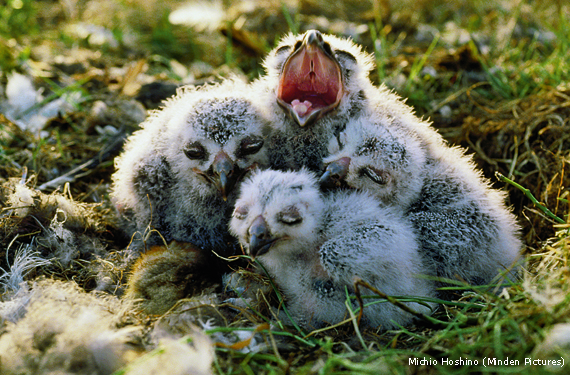 This knowledge can’t come a moment too soon: Snowies are among the species under most immediate threat from climate change, and new evidence suggests there may be fewer of them than scientists previously believed.

Until recently, experts estimated the global snowy owl population at roughly 200,000 to 300,000 birds with nearly half in North America. Scientists arrived at those numbers through some back-of-the-envelope calculations, from counts at a few breeding aggregations and extrapolation based on the acreage of tundra habitat across the Arctic. The researchers assumed snowies were distributed evenly and faithful to the same breeding areas. But such assumptions are not reliable, given that snowies are highly nomadic and dependent on periodic lemming booms for successful reproduction and survival. Those booms occur sporadically in the Arctic, in some spots only every few decades.

Two years ago, Eugene Potapov—a SNOWstorm colleague and biologist who specializes in Arctic raptors at Bryn Athyn College in Pennsylvania—made a more careful analysis of breeding data based on knowledge of the birds’ nomadic nature, as confirmed by satellite-tracking data from Laval University and elsewhere. He concluded that no more than 31,000 breeding pairs survive worldwide, with as few as 3,500 pairs more likely. Ultimately, population figures for snowy owls are just educated guesses.

Not only are population numbers likely lower than we once thought, it’s clear that the birds’ habitat is changing rapidly. The owls breed in the northernmost reaches of the Arctic—northwest Alaska, the Arctic islands of Canada and the most northerly peninsulas and islands in Siberia. There, the birds appear to depend on open tundra to breed and nest. But as the region warms and the open tundra is invaded by shrubs and trees, the birds may lose suitable breeding sites, and they’ll have no place to move.

Food supply may also become a challenge. By one estimate, the lemmings the birds depend on will lose 60 percent of their habitat if the region warms by 4 degrees Centigrade, and changing Arctic weather is already having an impact on the rodents. In some regions, the once-metronomic regularity of their population cycle has begun to falter. In parts of Canada and Siberia, for example, the interval between peaks has stretched from four years to as many as eight years. In Arctic Norway, the lemming cycle collapsed entirely in 1994 and has stayed flat ever since. The same situation occurred in northeastern Greenland beginning in 1998, and snowy owl nesting success there subsequently dropped by 98 percent.

So, while our team’s continuing adventures with snowy owls remain exciting, some of us also have a keen sense of sand slipping through an hourglass. The owls’ world is changing, and the work that we and other researchers are doing will be critical if we’re to preserve these majestic, yellow-eyed spirits of the distant Arctic. 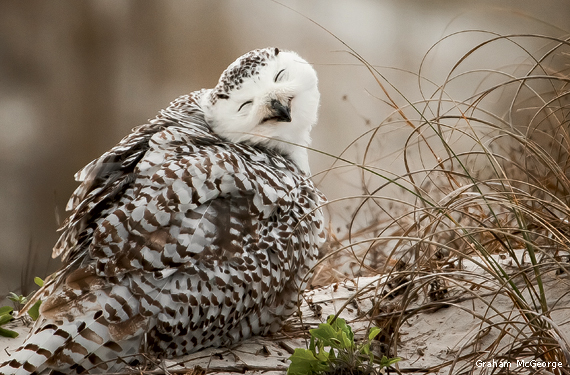 Safeguarding Arctic Wildlife
The National Wildlife Federation is working to cut carbon pollution and support clean energy—two steps that can help reduce the effects of climate change that impact Arctic wildlife. NWF also is leading efforts to protect habitat near the Great Lakes, where many snowy owls traveled during last winter’s irruption. To learn more, visit www.nwf.org/climate and www.nwf.org/greatlakes.
Pennsylvania writer and researcher Scott Weidensaul is the author of a forthcoming Peterson guide to owls.
Support NWF's Work to Protect Wildlife >>

Snowy Owl: Super Bird
Snowy Owl: A Connection to the Far North (and the Perils of Keystone XL)
Snowy Owl Sighting in Downtown DC
How to Enjoy Owls in Winter (or Anytime)