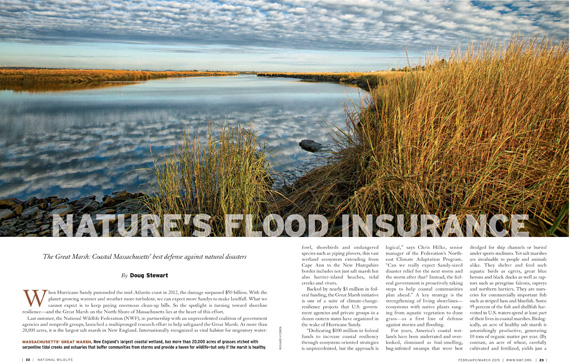 WHEN HURRICANE SANDY pummeled the mid-Atlantic coast in 2012, the damage surpassed $50 billion. With the planet growing warmer and weather more turbulent, we can expect more Sandys to make landfall. What we cannot expect is to keep paying enormous clean-up bills. So the spotlight is turning toward shoreline resilience—and the Great Marsh on the North Shore of Massachusetts lies at the heart of this effort.

Last summer, the National Wildlife Federation (NWF), in partnership with an unprecedented coalition of government agencies and nonprofit groups, launched a multipronged research effort to help safeguard the Great Marsh (map, below). At more than 20,000 acres, it is the largest salt marsh in New England. Internationally recognized as vital habitat for migratory waterfowl, shorebirds and endangered species such as piping plovers, this vast wetland ecosystem extending from Cape Ann to the New Hampshire border includes not just salt marsh but also barrier-island beaches, tidal creeks and rivers.

Backed by nearly $3 million in federal funding, the Great Marsh initiative is one of a suite of climate-change-resilience projects that U.S. government agencies and private groups in a dozen eastern states have organized in the wake of Hurricane Sandy. 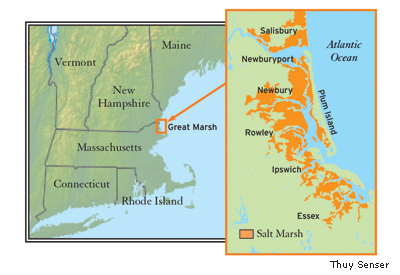 “Dedicating $100 million in federal funds to increase coastal resiliency through ecosystem-oriented strategies is unprecedented, but the approach is logical,” says Chris Hilke, senior manager of the Federation’s Northeast Climate Adaptation Program. “Can we really expect Sandy-sized disaster relief for the next storm and the storm after that? Instead, the federal government is proactively taking steps to help coastal communities plan ahead.” A key strategy is the strengthening of living shorelines—ecosystems with native plants ranging from aquatic vegetation to dune grass—as a first line of defense against storms and flooding.

For years, America’s coastal wetlands have been underrated and overlooked, dismissed as foul-smelling, bug-infested swamps that were best dredged for ship channels or buried under sports stadiums. Yet salt marshes are invaluable to people and animals alike. They shelter and feed such aquatic birds as egrets, great blue herons and black ducks as well as raptors such as peregrine falcons, ospreys and northern harriers. They are nurseries for commercially important fish such as striped bass and bluefish. Some 95 percent of the fish and shellfish harvested in U.S. waters spend at least part of their lives in coastal marshes. Biologically, an acre of healthy salt marsh is astonishingly productive, generating  10 tons of organic matter per year. (By contrast, an acre of wheat, carefully cultivated and fertilized, yields just a ton and a half.) Released into estuaries, this rich broth of nutrients is essential to the nation’s offshore fisheries. 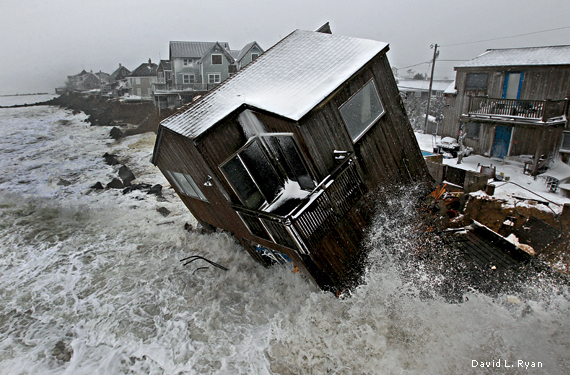 The Great Marsh project aims to identify and combat growing threats to what is still a healthy, intact ecosystem. One of these threats is beach erosion. The marsh endures only because it is protected by barrier islands, notably Plum Island, an 8.5-mile-long sweep of dunes, marsh and scrub forest and site of the Parker River National Wildlife Refuge. On the island’s built-up, northern tip, storms have collapsed dunes and sometimes toppled houses into the surf (above). A short-term fix—here and on other barrier islands—is to pile more sand on the dunes. It would be wiser to limit or ban new construction on barrier beaches, but such efforts are inevitably a tough sell politically.

Even if intact barrier islands protect inland salt marshes, those marshes will die if the sea level climbs too quickly, drowning the marsh grasses. “The tipping point,” says wildlife biologist and marsh expert Nancy Pau of the Parker River refuge, would be “an increase of about 6 millimeters a year.” At that point, parts of the marsh would suffer a slow-motion death: Marsh grasses cannot survive immersion in salt water for long periods, and dead grass cannot hold a marsh together.

Such a death would be disaster for inland towns and the broader ecosystem bordering the marsh. Though it’s low and flat, the Great Marsh provides a vital bulwark against damaging storm surges. “All those miles of marsh grass will actually dissipate the wave action before it gets to the mainland,” says Pau. As a result, “You see less erosion and flooding.” Transplanting beds of eelgrass into the Great Marsh estuary, which the new grant supports, also helps dampen wave energy—a smart investment. Indeed, by one study’s estimate, a single acre of healthy Atlantic coastal wetlands reduces property damage from hurricanes by an average of $3,300 a year. 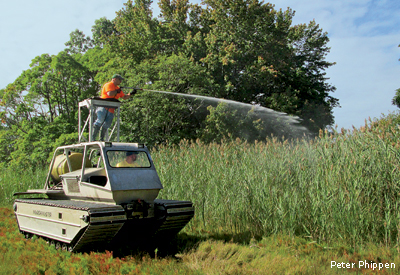 A threat to the marsh that is less obvious than high water is invasive plants such as Phragmites australis. Also known as the common reed, phragmites forms dense, plume-topped thickets up to 20 feet high. Its roots break up the underlying peat, chunks of which crumble into the creeks. Left unchecked, this results in less solid ground and more open water.

“Phragmites grows best at the edges of the marsh, where saltwater and freshwater mix,” says Peter Phippen, who heads the initiative’s invasive-species task force. Unfortunately, the weed has also begun appearing out in the open marsh. He suspects the plant’s success is due to marsh soils being less salty than they used to be, a result of changes in tidal flow. Researchers are working to produce a detailed salinity map of the marsh, which could help planners stop new infestations before they start. In the meantime, Phippen’s team is mowing, spraying and burning the weed. “When we kill off the phragmites and let sunlight get in,” he says, “the native seeds in the ground come back almost immediately.”

That native vegetation, he notes, is the best defense against climate change. Unlike phragmites, the low marsh’s dominant native plant—Spartina alterniflora, or smooth cordgrass—produces a formidable network of roots. This tangle is what helps bind mud, sediments, organic muck and other materials into the sturdy thatch that underlies the whole marsh. 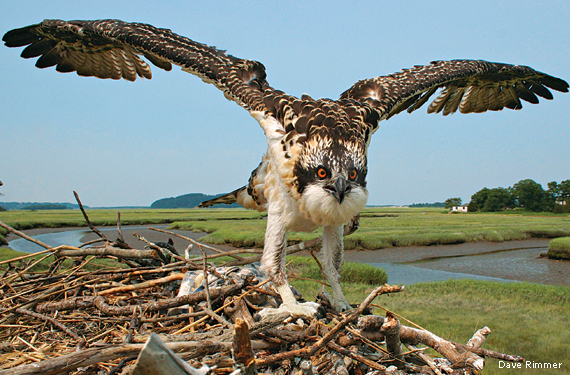 Part of the Great Marsh restoration project is an analysis of how water flows through the wetlands. In the low, open marsh, a tidal creek flowing under a bridge may seem unimpeded, but nine-tenths of the tide’s volume can be blocked by such structures. As a result, the interior marsh—which should resemble an expanse of ocean for an hour or two during full-moon tides (with whitecaps if it’s windy)—instead becomes drier and less salty. Eventually, invasive plants move in.

Funded by the new grant, hydrology modeling will help identify structures that interfere with water flow in and around the Great Marsh, whose 170,000-acre watershed includes some 1,500 barriers: culverts, dams, causeways, jetties and the like. “Barriers like road culverts have effects on both people and wildlife,” says Ipswich River Watershed Association Executive Director Wayne Castonguay, who is overseeing the barrier-assessment project. “On the upstream side, they almost always make flooding worse.” Buildings just above downtown Ipswich’s historic mill dam, for example, flood with depressing regularity.

As for animals, barriers in the uplands block the migration of once-abundant river herring. And raccoons, beavers, deer and coyotes that can’t squeeze through narrow culverts will try to cross roadways, putting them at risk from vehicle collisions. The town of Boxford addressed this problem by installing a new, much larger culvert that accommodates both fish and mammals and is unlikely to wash out in big storms. “The old culvert there had been replaced dozens of times over hundreds of years,” says Castonguay. 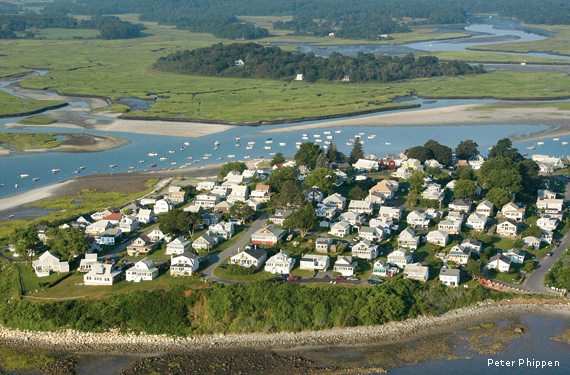 A central goal of the post-Sandy funding is building community resilience: bringing together environmentalists and local residents to work out better ways to lessen a town’s vulnerability to severe storms. As part of the Great Marsh project, the Federation is helping the six towns abutting the marsh—Essex, Ipswich (above), Rowley, Newbury, Newburyport and Salisbury—craft climate-change strategies. Lisa O’Donnell, a member of the town of Essex’s board of selectmen, says, “We’re particularly interested in green-infrastructure improvements that would preserve the river and marsh but also help to buffer impacts on our gray infrastructure [buildings and other property].”

This “climate-smart work” says Bruce Stein, NWF’s director of climate change adaptation, “is at an interesting intersection of human communities and natural communities, of where people live and where wildlife lives. How can we do a better job of helping to protect people and property in ways that are also good for wildlife?” The question grows more pressing as the climate shifts. Just building bigger pumps and seawalls, Stein says, is probably not the answer. “We’re really interested in understanding where natural systems can play a role in this.”

NWF and its partners are helping communities and agencies strategize how best to restore and enhance the environment’s ability to adjust to a changing climate. Find out more at www.nwf.org/climate-smart.
Doug Stewart, a long-time contributor, has lived in and around the Great Marsh for 30 years.
Support NWF's Work to Protect Wildlife >>

NWF and National Environmental Leaders Address Lessons of Sandy and Climate Change
NWF and USFWS Team Up for Great Marsh Restoration
NWF at Work: Northeast Regional Center
How to Create a Backyard Marsh
NWF at Work: Coast and Floodplain Protection and Restoration
Global Warming and Waterfowl