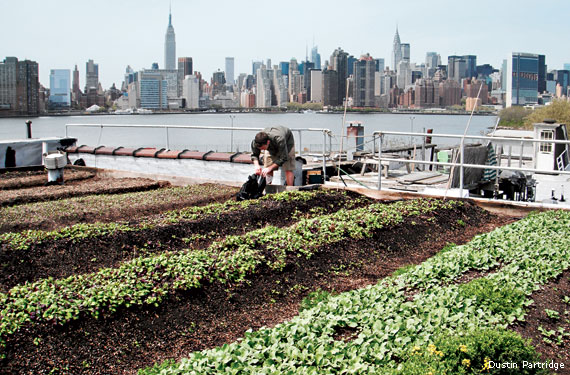 NEW YORK CITY'S CONGESTED AVENUES and imposing skyscrapers hardly seem like suitable wildlife habitat, save perhaps for the most hardy pigeon or rat. But each year a teeming diversity of migrating birds pass through this urban jungle. While most of those feathered visitors are drawn to large expanses of green such as Central Park, Prospect Park and Jamaica Bay, others congregate in whatever small pockets of habitat they can find—a vacant lot or a bushy median strip—where they feed and rest before continuing on their way. Now, a growing number of green roofs in the city are adding to those avian refuges, providing safe havens high above the honking cabs and frenetic crowds.

“Green roofs are a win-win all around,” says Dustin Partridge, a doctoral candidate in biology at Fordham University who has been studying such roofs in New York since 2009. “They are truly sustainable,” Partridge says.

Green roofs—defined as any roof covered with soil or other growing medium and vegetation—take many forms. Some are composed of mostly small succulents that require little maintenance; others are designer gardens with deeper soil and a greater diversity of plant life. Some even serve as small urban farms.

The Growth of Green Roofs
For years, residents in Switzerland, Germany and other European countries have valued green roofs for their ability to mitigate storm-water runoff, reduce urban heat, provide insulation for buildings and incorporate nature into cities. Although in the United States the green-roof trend only caught on relatively recently, it is quickly gaining traction. According to a survey conducted by the organization Green Roofs for Healthy Cities, the U.S. green-roof industry grew by 24 percent in 2012 alone. During that year, property owners in New York City installed nearly 400,000 square feet of green roofs on 93 buildings.

“In the past five years or so, building owners, architects and city planners started requesting and even demanding this kind of addition to their buildings,” says Lauren Mandel, project manager and rooftop agriculture specialist for Roofmeadow, a green-roof design and engineering firm based in Philadelphia.

Partridge values the economic and aesthetic incentives for building green roofs, but his true passion is wildlife. Green-roof supporters assume that the sites promote biodiversity, but he wanted to quantify just how significant a role they play for attracting winged and feathered creatures. A few studies in Europe mention bird presence on green roofs, but research on how the animals utilize such roofs in North America is almost nonexistent.

Green Roof Residents: Birds and Bees, or Roaches and Rats?
Partridge’s study took place on 10 green roofs scattered throughout New York’s boroughs, six managed by the city and the other four privately owned. For every private green-roof study site, he also gained access to a nearby traditional roof—which typically is covered in tar or rock ballast or is painted silver—so he could determine how the two compared.

About 130 species of neotropical migrant pass through the city each spring and fall while traveling along the Atlantic flyway—one of North America’s largest bird-migration routes. In the city’s 840-acre Central Park, birders can spot more than 200 species annually. Those counts include other types of birds in addition to the migrants.

To see how the birds do or don’t take advantage of green roofs, Partridge visited each privately owned building in the study once a week from mid-April through the beginning of August in 2011 and 2012. He spent about two hours in the early morning on the roofs recording the species, and he visited the sites in pairs—one traditional, one green. In both and on the public buildings in his study, he set up autonomous units that recorded bird vocalizations, starting half an hour before sunrise and continuing until just after sunset. He also kept records and took specimens of the arthropods he found. 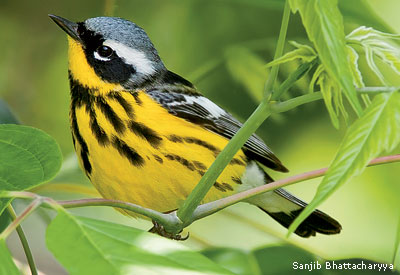 Partridge continues to analyze his data, but his results so far are telling. Twenty-six of the 37 bird species observed in the study turned up only on green roofs. The researcher commonly spotted or heard flycatchers, magnolia warblers (right) and peregrine falcons. Some surprise visitors also appeared, including woodcocks and hummingbirds. “Seeing a hummingbird nine stories up in the Bronx is a fun experience,” he says.
Partridge has identified about half of the 20,000 arthropods he collected, and his study indicates that insect diversity may be about six times greater on green roofs than on traditional roofs. Those insects, he points out, are valuable food sources for birds.

Though difficult for some New Yorkers to believe, pigeons seem to be no more common on green roofs than on other roofs. Additionally, Partridge did not collect a single cockroach on a green roof, and he never saw a rat.

Though the types of birds that visit the roofs do not differ by location, the researcher found that each roof’s arthropod community is different. Partridge thinks this might be due to the diversity of paths that small arthropods take. Some, such as large beetles and bees, can fly up to a green roof, while others arrive in the soil or on plants. Still others, like spiders, can hitch a ride by getting caught up in the wind. “For bugs, green roofs are essentially flying islands,” he says. “Some get lucky and land where they’re able to survive and persist.”

Partridge points out that his study does not assess the quality of green roofs as habitat for birds, though other researchers have demonstrated that tiny parks and other small urban stopover sites provide valuable locations for birds to rebuild their fat and muscle tissue during migration breaks. But his results do indicate that biodiversity on green roofs is significant.

This biodiversity likely will increase in the years to come. As more and more green roofs sprout up, Partridge points out, they will form a patchwork of bird habitat that is only divided by thin canyons of the street below. “Aerial images of some cities in Europe show green roofs all over the place,” he says. “In the future, that could be something that happens in New York.”

Create Your Own Wildlife Haven
Want to learn how to entice birds, beneficial insects and other native wildlife to your property? For a wide range of tips and information about appropriate plants to cultivate and how to join NWF’s Certified Wildlife Habitat® program, visit www.nwf.org/nwfgarden.