A photographer captures a mosquito pollinating a rare orchid 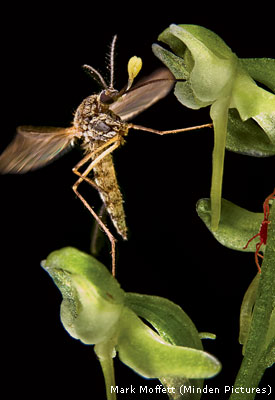 "WHAT ARE MOSQUITOES GOOD FOR?" It’s a question entomologist and photographer Mark Moffett hears often. When he learned that a species of Aedes mosquito pollinates a rare orchid, Platanthera obtusata, he finally had an answer—and an opportunity to show “a less clichéd example of an animal fertilizing a flower.” But making this image of the mosquito lifting off the orchid in Minnesota—with pollen stuck to its snout and a red mite nearby—proved perilous.

Unable to wear mosquito repellent near his subjects, Moffett says he “ended up with so many bites it looked like I had Moby Dick written in braille on my skin.”