Showing Big Cats to Save Them 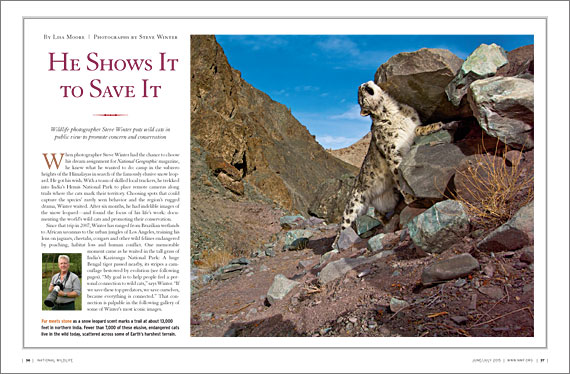 WHEN PHOTOGRAPHER STEVE WINTER had the chance to choose his dream assignment for National Geographic magazine, he knew what he wanted to do: camp in the subzero heights of the Himalayas in search of the famously elusive snow leopard. He got his wish. With a team of skilled local trackers, he trekked into India’s Hemis National Park to place remote cameras along trails where the cats mark their territory. Choosing spots that could capture the species’ rarely seen behavior and the region’s rugged drama, Winter waited. After six months, he had indelible images of the snow leopard (above)—and found the focus of his life’s work: documenting the world’s wild cats and promoting their conservation.

Since that trip in 2007, Winter has ranged from Brazilian wetlands to African savannas to the urban jungles of Los Angeles, training his lens on jaguars, cheetahs, cougars and other wild felines endangered by poaching, habitat loss and human conflict. One memorable moment came as he waited in the tall grass of India’s Kaziranga National Park: A huge Bengal tiger passed nearby, its stripes a camouflage bestowed by evolution (see following pages). “My goal is to help people feel a personal connection to wild cats,” says Winter. “If we save these top predators, we save ourselves, because everything is connected.” That connection is palpable in the following gallery of some of Winter’s most iconic images.

With lethal focus, a jaguar leaps from a perch in Brazil’s Pantanal wetlands toward its prey—caiman in the river below. This was something I had never seen,” says Winter, who sat in a boat watching the cat sleep for four hours before it stirred. When it spied the caiman and began to move, Winter set his camera at 10 frames per second to capture the startling dive. Largest cat in the Western Hemisphere and third largest in the world after tigers (below) and lions, jaguars range across 18 countries in Latin America but are considered threatened due to habitat loss and fragmentation, direct hunting and overhunting of prey by locals. To help protect the species, the wild-cat conservation group Panthera launched the Jaguar Corridor Initiative to connect populations from Mexico to Argentina. 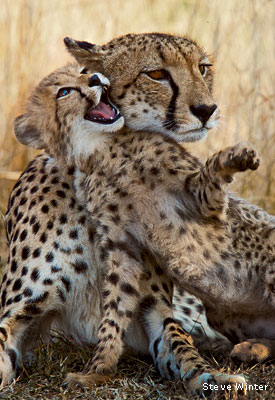 Batting its paw at a nearby sibling, a playful cheetah cub interrupts a grooming session from its mother—and creates what Winter calls one of those rare “Awww” moments. He spent days with this mother and her four cubs at a game reserve in South Africa’s KwaZulu-Natal Province, hoping to capture natural behavior and images that “people haven’t seen before, so they can look at the cats in a new light.

Such new perspectives may inspire people to help protect cheetahs, which have vanished from more than 77 percent of their former range in Africa. Fewer than 10,000 remain in the wild, most in small, isolated populations. For the world’s fastest land mammal, the race is now on to prevent its extinction. 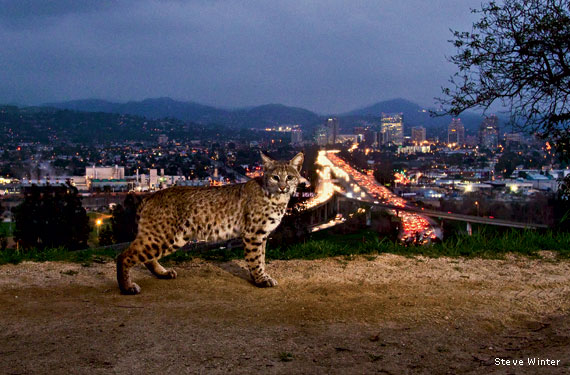 Backlit by the rush-hour glare of a Los Angeles freeway, a bobcat caught by remote camera roams the city’s Griffith Park—and serves as a stark symbol of human encroachment on wild lands. “Just a foot away from the camera is a fence to the L.A. Zoo, where you can hear lions roaring,” says Winter, whose remote cameras have documented wildlife in this vast urban park. Highly adaptable and widely distributed through North America, bobcats are not endangered and can be legally hunted in some states. Not much larger than a house cat, these generalist carnivores may be well suited to urban life—by necessity if not by choice. 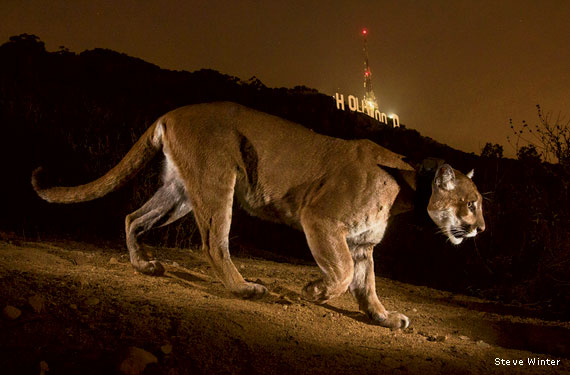 My favorite image is whichever one brings about the greatest connection,” says Winter. “Right now, it’s the Hollywood cougar because it’s doing so much.” He’s referring to his shot of a male cougar dubbed P22. Remarkably, this cat crossed two freeways to reach L.A.’s Griffith Park, where he’s now essentially trapped, unable to roam freely to hunt for mates. Winter’s now-famous image of P22 near the Hollywood sign is galvanizing support for wildlife crossings that could give urban cougars some freedom to move. The National Wildlife Federation and Santa Monica Mountains Fund have been supporting one such crossing over California’s Highway 101, and the State Coastal Commission of California recently approved a grant of $1 million for the effort. To help, visit www.nwf.org/lacougars.

The Ultimate Urban Cats
Cougars: On the Trails of the Ghost Cat
The Cat that Loves Water
NWF Certified Community is the Cat's Cradle
Wildlife Advocates Rally for "Cougar Crossing"