A roving herd in Zimbabwe puts human ingenuity to the test 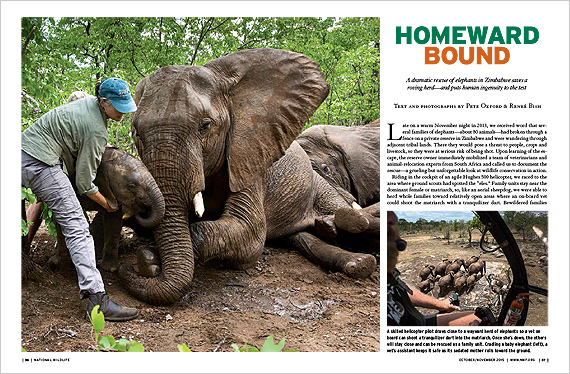 LATE ON A WARM NOVEMBER NIGHT IN 2013, we received word that several families of elephants—about 80 animals—had broken through a fence on a private reserve in Zimbabwe and were wandering through adjacent tribal lands. There they would pose a threat to people, crops and livestock, so they were at serious risk of being shot. Upon learning of the escape, the reserve owner immediately mobilized a team of veterinarians and animal-relocation experts from South Africa and called us to document the rescue—a grueling but unforgettable look at wildlife conservation in action. 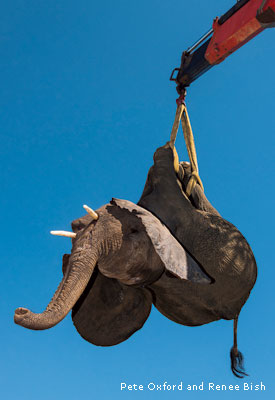 Riding in the cockpit of an agile Hughes 500 helicopter, we raced to the area where ground scouts had spotted the “eles.” Family units stay near the dominant female or matriarch, so, like an aerial sheepdog, we were able to herd whole families toward relatively open areas where an on-board vet could shoot the matriarch with a tranquilizer dart. Bewildered families would cluster around the reclining matriarch as the ground crew moved in quickly. Within 15 minutes, each animal was sedated.

Scrambling like Lilliputians on boulders, the crew rolled elephants onto their sides, covered their eyes with their ears for shade and propped open their trunks for safe breathing. Vets kept the drugs at adequate levels to ensure immobility while ground crews with chain saws and machetes hacked a route to the scene so cranes and trucks could haul the animals to flatbed trailers for the trip home. Back in the reserve, the eles were off-loaded then injected simultaneously with a reversal drug. They soon stirred, rose and disappeared into the bush and out of harm’s way.  Within a couple of weeks, all the escaped eles were recovered, a monumental achievement.
A skilled helicopter pilot draws close to a wayward herd of elephants so a vet on board can shoot a tranquilizer dart into the matriarch. Once she’s down, the others will stay close and can be rescued as a family unit.

“There is nothing quite so strange as seeing an elephant hanging upside down, tied by its feet to a crane,” says photographer Pete Oxford, who documented the labor-intensive rescue of 17 elephants in one family that had strayed into an area of Zimbabwe where they would likely have been shot. It took a crew of more than 30 people to fly, drive and hack their way into rugged terrain to reach the animals, all of which survived the experience with no apparent ill effects.

Sticks propped in trunks helped sedated elephants breathe safely. Vets and field hands closely monitored the animals as they were secured on flatbed trailers (below) for the return home. Once there, drugs reversed the sedation, and the family ambled off together. 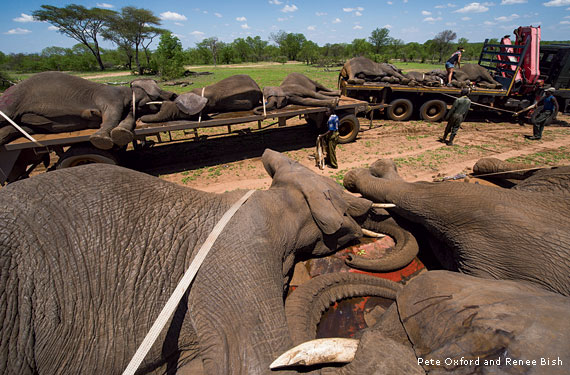 Pete Oxford and Reneé Bish travel together across the globe to document wildlife conservation.