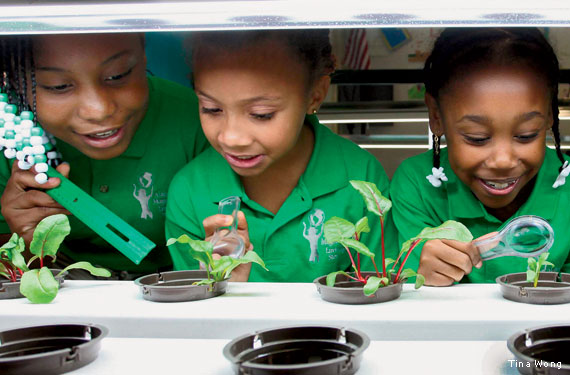 IN ROOM 106A AT THE BROOKLYN NEW SCHOOL, elementary students leave the world of linoleum hallways and desks and enter a wild kingdom. Hissing cockroaches and giant walking sticks silently creep through terrariums. Seedlings in a minigreenhouse reach for the light. Wasp nests, pinecones and preserved leaves adorn the walls, and dozens of jars containing salvaged odds and ends—such as wine corks, bottle tops and horse chestnuts—beckon creative minds to put them to use.

It’s Wednesday afternoon and the school’s Green Club—12 fifth-graders pursuing innovative solutions to environmental challenges—have gathered here for important business: planting pollinator-friendly flowers in their school’s garden, a National Wildlife Federation certified Schoolyard Habitat®. Here the students also grow peas, arugula, radishes and other vegetables served at the school. The club’s accomplishments are formidable, from helping maintain a schoolwide composting program to gathering more than 500 signatures on a petition to the city asking to turn a nearby vacant lot into a community garden.

As two club members pick up either end of a flat brimming with young native milkweed, coneflowers and other plants, Johanna Esteras, the school’s sustainability coordinator, holds up a beat-up pair of garden gloves.

“Hey guys, these are old, but we’ve gotta figure out a way to reuse them! What can we do?” she asks her pupils.

“We can hang them upside down and turn them into planters!” a young voice immediately pipes up.


The Brooklyn New School is one of 300 New York City schools that are participating in Eco-Schools, an international program founded in 1994 that is now in 59 countries and teaches students environmental best practices. NWF began hosting the Eco-Schools USA program in 2008. There are now more than 3,300 Eco-Schools nationwide, but nowhere are they as plentiful as in New York City.

“The program engages students in exploring their school and community as a living laboratory and encourages them to make real, beneficial changes for the environment,” says Emily Fano, who manages New York City’s Eco-Schools program. “The goal is to integrate education for sustainability into the curriculum, to have it become the lens through which teachers teach rather than an add-on.”

Eco-Schools inspires green learning and action through its 10 Pathways of Sustainability. These 10 environmentally themed subjects—including Climate Change, Consumption and Waste, and Sustainable Food—are designed to educate students about conservation issues and help them take measurable action for the environment at school and beyond. Teachers are provided training and support to help them integrate into their curriculum hands-on activities ranging from intense recycling programs to species surveys. If students complete at least three of the pathways—one of which must be about reducing energy use—then their school earns the coveted Green Flag award, a top honor that needs to be earned again every other year.

While the country’s largest metropolis might seem an unlikely place for environmental stewardship, teachers in all five New York boroughs have excelled at finding creative, urban-friendly projects. On Governor’s Island, for example, New York Harbor School students rear oysters and introduce these once-plentiful animals back into New York Harbor. As part of Eco-Schools’ Growing a Wild Brooklyn and Queens program with the U.S. National Park Service, more than 600 elementary students have planted about 1,000 pollinator-friendly plants in their school gardens and at the Jamaica Bay Wildlife Refuge. St. Clare, an elementary school on Staten Island, participates in a glass-eel monitoring project each spring, helping New York State officials count thousands of the migratory eels as they make their way upstate.

“It brings science to life for the students,” says St. Clare science teacher Mary Lee. “If they become passionate about science, maybe they’ll pursue it as a career.”

At the NYC iSchool—a Green Flag high school in Manhattan—students went so far as to complete a whopping eight of the 10 pathways. For the Biodiversity Pathway, they cataloged bird and tree communities within a two-block radius of the school, installed planters filled with native plants, and built and hung birdhouses. In the fall, they will conduct another audit to see if they increased biodiversity. “This was one of the coolest experiences I’ve had professionally,” says Peter Mulroy, the students’ science teacher.

At the Bronx Design and Construction Academy, science teacher Nathaniel Wight and his high school students were awarded a $100,000 Zayed Future Energy Prize to build an Energy-Environment Research Center complete with a self-sustaining greenhouse to go along with the green roof they installed in 2010. The center will produce its own energy via solar panels and wind turbines and harvest rainwater to grow crops. While plans to build the center were already underway, joining “the Eco-Schools program has helped us by providing support for the really cool stuff we have planned,” Wight says.


Eco-Schools fit in with New York City’s broader conservation and education goals as well. In April, Mayor Bill de Blasio pledged to reduce the city’s commercial waste by 90 percent by 2030, for example, while City Council Member Costa Constantinides is pushing to make climate change a mandatory part of the K-12 curriculum. Eco-Schools, meanwhile, have diverted tens of thousands of pounds of waste from landfills through waste-reduction and recycling programs, and have prevented thousands of pounds of greenhouse gas emissions from being released through NWF’s Cool School Challenge, which encourages practical strategies for cutting back on carbon dioxide output. Research also shows that students are more motivated in the classroom when they feel their schoolwork has a meaningful impact on their lives or their community.

“New York City is the largest school district in the nation, with 1.1 million students in public schools alone,” Fano says. “Students can make a real difference in their schools through the Eco-Schools program, and we’d love to see all NYC schools—public and private—engaged in it.”